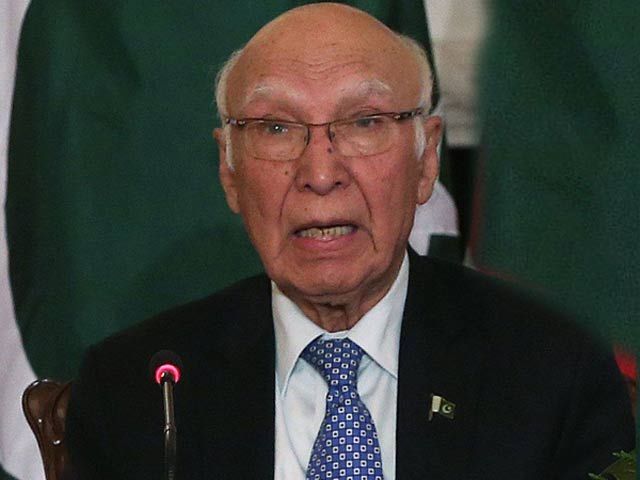 Prime Minister’s adviser on foreign affairs Sartaj Aziz has underlined the need for promoting tolerance and harmony in society through educating people about different religions and cultures.

“It is vital that we promote mutual respect and tolerance between people of different backgrounds so that they can accept each other and live together peacefully,” Aziz said while addressing at a documentary screening session at the Institute of Strategic Studies here on Wednesday.

“This is only possible by truly gaining knowledge,” he added.

The documentary ‘Journey into Europe’, produced by Professor Akbar S Ahmed, acclaimed author, historian and maker of ‘Jinnah’, explores the place of Islam in European history and civilisation.

Based on fieldwork, the documentary traces relations between Muslims and the Europeans, citing the examples of Andalusia and La Convivencia — centuries of peaceful Muslim rule and their promotion of knowledge and co-existence among Muslims, Jews and Christians.

The adviser who was the chief guest, said educating each other about different religions and communities is the way to tolerance. He clarified that what has happened in Europe is a prime example of intolerance.

Workshops at seminaries: Students urged to work for promoting harmony

Speaking to The Express Tribune, Dr Amineh Hoti, daughter of Professor Ahmed and executive director at the Centre for Dialogue and Action, said the effort aims at building bridges among different communities, ethnicities, countries and religions.

“This project includes a book and a documentary, highlighting examples where Muslims face discrimination and prime examples of tolerance and co-existence.”

The genocide in Bosnia has also been highlighted in the documentary, she said.

Hoti further mentioned that she interviewed a woman called Khadija from Bosnia, for this documentary, who lost 50 members of her family when Serbians came and the neighbours killed each other.

“Men were killed and women were raped.”

At the same time the documentary highlights another example from Andalusia in Spain where Muslims ruled but lived peacefully with people of other faiths.

“This lead them produce some of the best knowledge the world has ever seen,” she added.

The institute’s Director General Masood Khan said the message of the documentary is not despondence but hope.

“It explores how Christians, Muslims and Jews can live together and promote harmony and peace. After the Paris attacks, some existential questions have arisen. Europe and Islam are not quintessentially different, many parts of Europe are still inspired by Islam,” he said.

He further said that it is our collective responsibility to stop terrorists from hurting people in Europe and other parts of the world.

“We have to work together to prostrate murderous designs of masterminds of terror, repulse their attacks and destroy their entity while at the same time Europe must stop hating innocent Muslims,” Khan stressed.