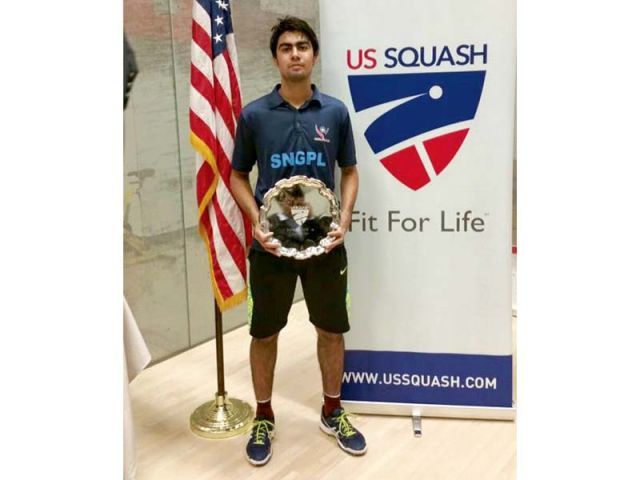 Israr became the first player from Pakistan to win the U19 event of the US Junior Open Squash Championships. PHOTO COURTESY: PSF

KARACHI: Pakistan’s Israr Ahmed, the reigning Asian junior champion, became the first Pakistani to win the U19 title at the US Junior Open Squash Championships when he defeated Japan’s Ryunosuke Tsukue 11-9, 11-7, 7-11, 11-8 in the final.

Israr, who overcame US’s Spencer Lovejoy 11-4, 11-6, 11-8 in the semi-final, started the match on a winning note as he pipped his opponent in the first game and doubled his lead by winning the second as well.

Tsukue hit back with a win in the third game to make it 2-1 but Israr registered a win in the fourth to win the match and the championship.

“Israr has delivered the first U19 title for Pakistan in the US Junior Open Squash Championships and we are extremely proud,” Nawaz told The Express Tribune. “Around 600 players from all over the world participated in the tournament and to see Israr going all the way from a draw of 128 players is remarkable. We expect that with his sheer hard work and sincere efforts, he would continue to further bring laurels for the country in the future as well.”

Meanwhile, Asfandyar Khan, Uzair Rasheed and Ejaz Mehmund participated in the U17 events, Haris Qasim and Abbas Zeb featured in the U15 events, while Khushal Riaz Khan and Malik Abdul Moiz played in the U13 events.

PSL draft — from rookies to riches