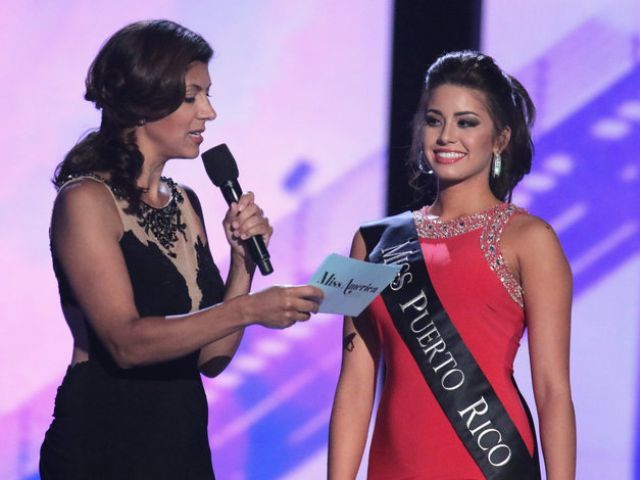 Miss Puerto Rico 2015 was indefinitely suspended from her role for launching a tirade against Muslims on Twitter.

Destiny Velez, 20, had her title taken away by the official Miss America Organisation after she blasted Islam and filmmaker Michael Moore for starting the #WeAreAllMuslim social media campaign.

Go to hell’: Trump under fire over Muslim ban call

Velez charged that Muslims “have terrorising agendas in their sacred books.” Further, in a tweet to Moore, the 20-year-old said, “All what Muslims have done is provided oil and terrorise this country and many others!!!!!!”

Moore had posted a picture of himself outside Trump Tower in New York City with a sign reading, “We are all Muslim.”

Velez tweeted directly at Moore multiple times, saying Muslims had “terrorising agendas.” “If we are all the same then Muslims need to take off their napkins off of their heads cuz I feel offended by it,” she added.

“In regards to Miss Puerto Rico, Destiny Velez’s, recent actions and conduct; the Miss Puerto Rico Organisation feels that her words do not represent the integrity and esteem of our programme, nor that of our board members, our sponsors and partners, or the National Organisation,” the island’s official Miss American organisation said in a statement.

The organisation also posted a statement from Velez, who has now also shut down her Tumblr and Instagram pages.

She said, “I apologise to the people I have offended with my words. I am first and foremost an #UpStander and as such I stand up against bullying.”

“The last thing I wanted to do was to bully anyone. Again, I apologise to anyone who felt offended with my words,” she added.

I apologize to anyone who felt offended with my words,”… said Miss Velez.