Art exhibition: A tradition of storytelling

Art exhibition: A tradition of storytelling 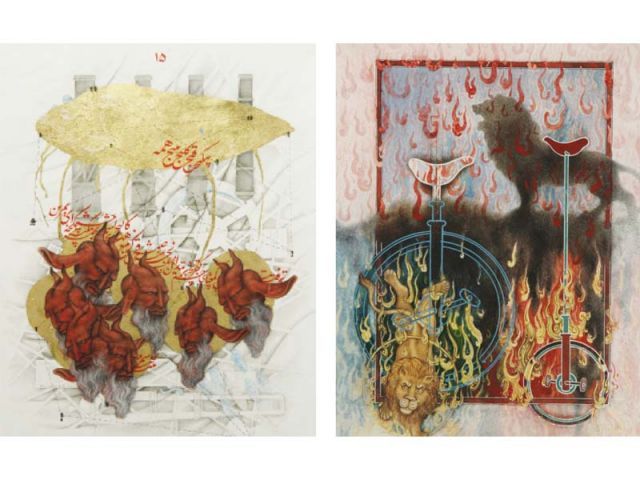 A group show titled Mythologies of the Oppressed by Khadim Ali and Sher Ali commenced on Saturday at Rohtas 2 Art Gallery. The exhibition features 10 pieces, five by each artist who have used gouache, gold leaf and mixed media on wasli.

Sher Ali, an artist from Afghanistan, has completed his BFA from Beaconhouse National University.

The luxury of exhibitions: Artwork with no place to go

“In this series, my subject is a lion – specifically a circus lion,” he said. Ali said he got the idea from questioning the meaning of his own name.

“I asked myself, what is a lion? What is my relation to it for me to be named after it?” he said. He said his name meant Ali’s Lion. “I also noticed it is not just my name. The Afghans call themselves the Lion Nation. Parents often call their sons ‘my lion’” he said. “I became interested in using a circus lion because the creature goes through a transformation that changes its nature,” he said.

“It also explains what the people of this region were going through as well,” he said. Ali said he did not consider his work miniature painting but drew inspiration from the technique used in the 15th century.

“It is a traditional method of storytelling. I am inspired by history,” he said.

Khadim Ali, born in Quetta and currently residing in Sydney, completed his BFA from the NCA in 2003 and master’s from College of Fine Arts, UNSW, Australia.

“My work focuses on demonisation of minorities in the region,” he said.

He said when he was researching on the Hazara community, he visited Afghanistan.

He said in the last 14 or 15 years, more than 200 Hazaras had been killed and not a single perpetrator had been captured or punished by the government. “Ahmadis, Qadianis and Hazaras are treated the same in this region. My paintings are a collective portrait of their plight,” he said. Talking about his carpet piece, Khadim said that on August 31, 2011, when he was in Sydney he received a call from his brother in Quetta saying that their parents were “gone”. “When I asked why, he said our house in Quetta had been blown up,” he said.

He said he called friends and family members who confirmed the news. “A crazy guy came in a car with 80 kilogrammes of explosive and blew himself up on Eid,” he said.  “Luckily my parents survived, although they were seriously injured,” he said.

“Whatever we had was destroyed,” he said. He said the only object that was left behind was a red carpet.

“After this incident, I switched from miniature painting to producing rugs. During the Russian invasion, a lot of Hazaras had moved to Quetta and were working on Afghan war rugs. I was doing the graphs and paintings for those rugs. It’s also a continuation of those memories and switching from one medium to another,” said Khadim Ali.

Salima Hashmi, co-founder of the gallery, was present at the opening of the show.

“Their work is exceptional because you rarely see people with this level of skill also deeply involved with the issues of their time,” she said.

“They have inherited a strong tradition of storytelling and they make full use of this,” she said.