Young Muslim­s say they often feel the need to prove how Americ­an they are to distan­ce themse­lves from radica­ls
By Reuters
Published: December 18, 2015
Tweet Email 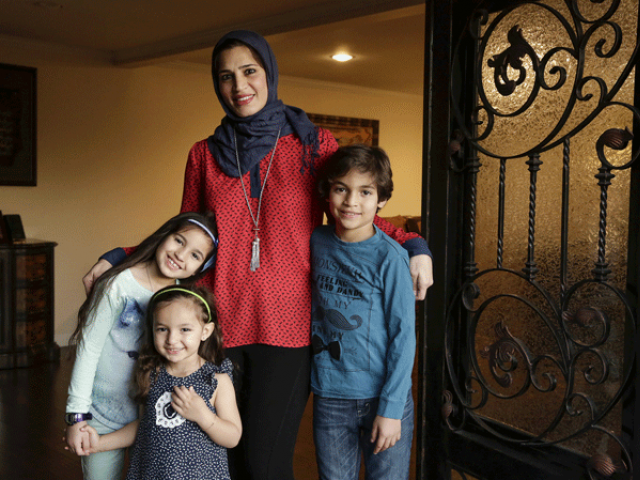 SAN FRANCISCO: Mirvette Judeh began covering her hijab with a hoodie two weeks ago while in the car with her two young children.

Someone might want to hurt their mother, she explained to them, because the head scarf easily identifies her as Muslim.

“Now I have to have these conversations with my kids,” said Judeh, 39, who lives in southern California.

“That’s what breaks my heart – to tell my kids that a choice I made to stand up for my religion could make me unsafe.”

As an anti-Muslim backlash swells across the United States following the December 2 massacre by a young Muslim couple inspired by Islamic State in San Bernardino, California, many young Muslim families say they fear for their safety and are struggling with their American and Muslim identities.

Judeh, for instance, said she has told her children that their actions may face extra scrutiny because they are Muslim.

She teaches her 8-year-old son, for example, to never utter the words “blow up” at school, regardless of the context, and to never pretend he is playing with guns, even if his friends do.

Her son has asked if people hate him and his family, Judeh said, a question she can find difficult to answer after receiving hateful comments and threats because of her hijab.

The problems have gathered pace since gunmen loyal to the Islamic State killed 130 people in Paris on November 13.

But even before the Paris violence, anti-Muslim sentiment was on the rise, swept along by rhetoric from US presidential candidates – from Republican Ben Carson’s comment in September that Muslims were unfit for the presidency to billionaire Donald Trump’s recent call for a ban on Muslim immigration.

Former Florida governor Jeb Bush, a Republican whose presidential campaign has struggled in recent months, has said the United States should only allow in Syrian refugees who can prove that they are Christian – a tiny fraction of the millions driven from the war-shattered country.

Some Muslim families say they fear a rising tide of hate crimes directed against their faith, such as when a pig’s head was found outside the door of a Philadelphia mosque on December 7, an incident that made national headlines. Pork and pork byproducts are haram, or forbidden, in Islam.

Some discrimination goes largely unnoticed, such as when a woman threw hot coffee at a group of Muslims praying in a park in California on December 6.

The Council on American-Islamic Relations, which tracks such incidents, says the scale of vandalism, damage and intimidation at American mosques this year is the worst in the six years they have kept records.

Many of the country’s 2.8 million Muslims say they fear such tensions could become uglier during a presidential race that is already tapping a vein of anger and bigotry.

Young Muslims said they often feel the need to prove how American they are to distance themselves from radicals.

For some, such as Sara Haddad, that means reminding people that they watch football or listen to pop music.

“I love the Dallas Cowboys,” she said, referring to the popular Texas football team.

“We have Thanksgiving with my parents. It’s almost like you have to do this thing where you say, ‘I’m so American’, but at the end of the day, what is American?” said Haddad, 27, a cancer research scientist in North Carolina who has a six-month-old daughter.

She said she has not yet decided how to explain militant or anti-Muslim rhetoric to her daughter when she is older.

She likens the predicament to parents wondering when to tell their children Santa Claus does not exist, hoping their innocence will stretch for as long as possible.

“I don’t want to believe that in five years it’ll be this bad or worse.”

In Baltimore, Arif Khan said he does not want his son’s childhood defined by conversations about shootings or other attacks.

He said he and his wife, who wears the hijab, take precautions when leaving the house.

They make sure no one is following them and carefully choose public places to pray when not home.

He said he and his wife want their one-month-old son to be vigilant as he gets older.

But they also hope to teach him that his Muslim and American values are complementary.

“We don’t want his world to be focused on how we combat negative stereotypes against us,” said Khan, 29.

“We want him to be a person indicative of what true Islamic and American values are.”

Jinan Al-Marayati, a 15-year-old Muslim who attends a Catholic school in Los Angeles, said she often feels pressured to defend her religion when the Islamic State comes up in class discussions.

She encourages questions from teachers and classmates, she said, but sometimes tries to downplay her Muslim and Palestinian background when she is with her American friends.