Semina­r on Gender Sensit­isatio­n and Women Empowe­rment in the Agricu­lture Sector held at UAF
By Our Correspondent
Published: December 18, 2015
Tweet Email 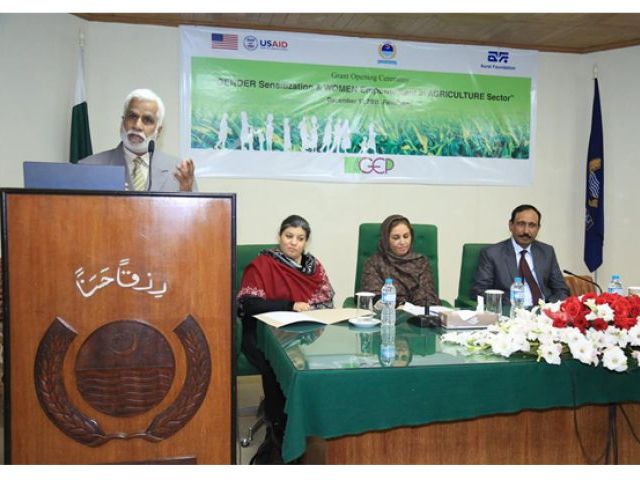 Seminar on Gender Sensitisation and Women Empowerment in the Agriculture Sector held at UAF. PHOTO: fb.com/UAF

Pakistan has been ranked 120th among 146 countries on the Gender-Related Development Index. The dismal statistic was shared at a seminar on Gender Sensitisation and Women Empowerment in the Agriculture Sector at the University of Agriculture Faisalabad (UAF) on Thursday.

The seminar was organised by the UAF’s Department of Rural Sociology and Institute of Home Economics.

Addressing the inaugural session, MNA Ghulam Bibi Bharwana stressed the need to educate women in rural areas and raise awareness about their rights.

She said most women in rural areas played a pivotal role in the development of agriculture but their role had largely remained unrecognised. “It is the duty of students, academics and researchers to go to their doorsteps and raise awareness about their rights and their contributions to the national economy.”

Women’s empowerment is a prerequisite to achieving sustainable development and prosperity, Bharwana said. “We cannot formulate a strategy for development without considering the involvement of women in socioeconomic activities.”

The MNA stressed the need to mainstream women in rural areas.

Aurat Foundation Capacity Building Director Mahpara said the Aurat Foundation was taking several steps in order to reduce the gender gap in Pakistan. “We have more than 175 NGOs and CBOs covering various campaigns in Pakistan. We cannot ignore men and we must continue to help them change their attitudes towards women.”

Dr Mahrukh Saeed Khan from University of Auckland, New Zealand, said that women’s role in families and in the workspace was neither fully recognised nor accepted and was, more often than not, overshadowed by men. She said soft loan schemes for women farmers could be introduced to empower them financially. She also called for raising the literacy rate among women and equipping them with vocational training and new farming techniques.

Abeera Tariq, a farmer, said Islam accorded women great importance and rights. “We hardly come across women in the seed industry or in the market…women farmers face obstacles in growing and selling their produce.” She said the issue could be addressed by incentivising farming by women.

Manzoor Thakar, who identified himself as a progressive farmer, urged the participants to take steps to raise awareness among the masses about the importance of women’s empowerment. He said women in Pakistan were faced with a multitude of challenges.

Department Chairman Ashfaq Mann urged women to prove their mettle in every sphere of life.