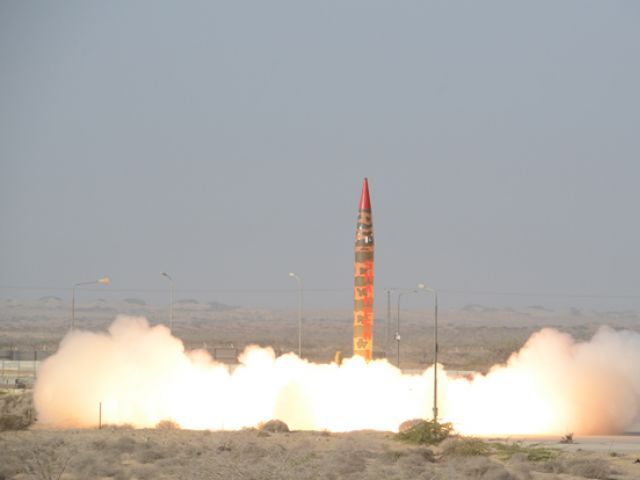 The flight test was aimed at re-validating several design and technical parameters of the weapon system, ISPR added. Shaheen1A is capable of delivering different types of warheads to a range of 900 kilometers.

Pakistan tested today Shaheen 1 A missile which has a range of 900 KM.

Director General Strategic Plans Division, Lieutenant General Mazhar Jamil,​​ congratulated the scientists and engineers for their dedication, professionalism and commitment towards yet another display of strengthening Pakistan’s defence.

He said Shaheen-1A with its sophisticated and advanced guidance system makes it a highly accurate missile system, reiterating Pakistan’s strategic capabilities are based on Credible Minimum Deterrence and desire for peaceful co-existence in the region.

The successful test launch has been warmly appreciated by President Mamnoon Hussain and Prime Minister Nawaz Sharif who congratulated the scientists and engineers on achieving another outstanding milestone.

Last week, Pakistan conducted a successful flight test of the medium-range Shaheen-III surface-to-surface ballistic missile, which can deliver a nuclear payload as far as 2,750 kilometres.

Ayyan Ali approaches SHC for removal of name from ECL