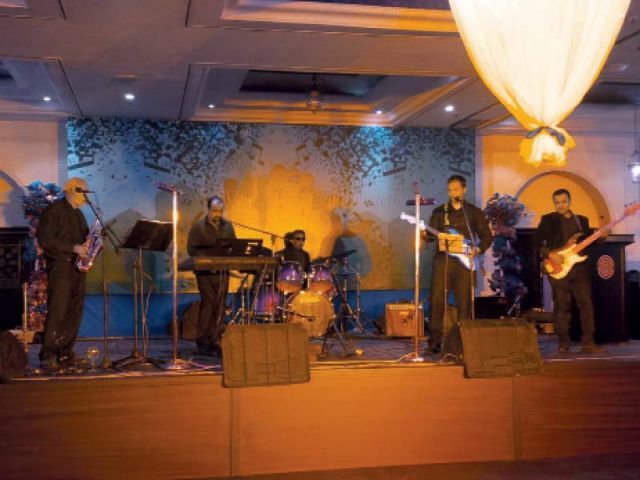 The Envoys Band performs at the gathering on Sunday. PHOTO: VAQAS ASGHAR/EXPRESS

ISLAMABAD: A Christmas-themed hall was set up for a dinner reception in honour of Argentine Ambassador Rodolfo Martin-Saravia on Sunday, here at a local hotel.

The reception was arranged to bid farewell to Saravia, whose 12-year tenure in Pakistan will come to an end in spring.

The Adviser to the Prime Minister on Foreign Affairs, Sartaj Aziz, who attended the evening said, “It would be difficult to imagine the diplomatic scene without Rodolfo. In his tenure, Pak-Argentine ties have grown greatly. His mark on those relations will be remembered.”

Last in the speaking order, Saravia, who is also Dean of the Diplomatic Corps, said, “In my many years here, I have gotten to know all of you so well that I can name everyone here and tell what you all do. But don’t worry, I won’t do that.” He then referred to a recent interaction with Prime Minister Nawaz Sharif. “I joked to the prime minister that if you gave me a plot, I will stay here.”

On his time in Pakistan, he said, “The country and people are so nice, it is impossible not to become friends with them. I feel proud when people call me an [honourary] Pakistani.”

Off stage, he also said that he would visit Pakistan regularly because he feels so close to the country.

They then shifted to Western classics such as “Wonderful Tonight”, and later, more upbeat songs, which encouraged the audience to hit the dance floor.