Accord­ing to the Bomb Dispos­al Squad, the IED weighe­d around five kilos
By Our Correspondent
Published: December 13, 2015
Tweet Email 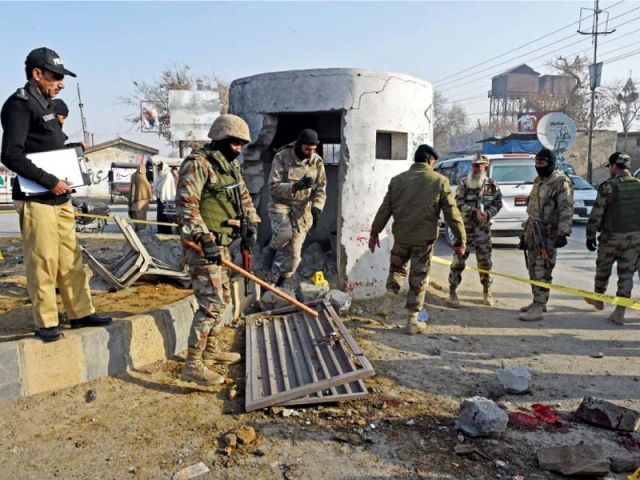 Policemen and FC personnel comb the area for clues after the bomb explosion. PHOTO: AFP

A soldier was killed and his three colleagues were wounded in a bomb attack on a checkpoint of the paramilitary Frontier Corps in Quetta Saturday morning. A child passing by the checkpoint was also wounded when terrorists remotely detonated the improvised explosive device (IED).

“The IED was planted at the FC checkpoint located on the intersection of Joint Road and Brewery Road,” a senior police official said. “Initially, four FC soldiers and a child were wounded. One of the soldiers later succumbed to his injuries,” he said and identified the dead soldier as Sepoy Imam Bakhsh.

According to the Bomb Disposal Squad, the IED weighed around five kilos. “The FC troops had left the checkpoint unmanned Friday night, Terrorists took advantage of the absence of FC troops and planted the IED,” SSP Operations Waheedur Rehman Khattak said.

“The terrorists remotely triggered the IED when FC troops returned to the checkpoint in the morning,” he added. Windowpanes of nearby shops and houses were shattered by the impact of the explosion.

At the bombsite, IGFC Maj Gen Sher Afgun said his force would trace the terrorists and bring them to justice. Later, police detained three shopkeepers from the area for questioning. No group immediately claimed responsibility for the bomb attack.