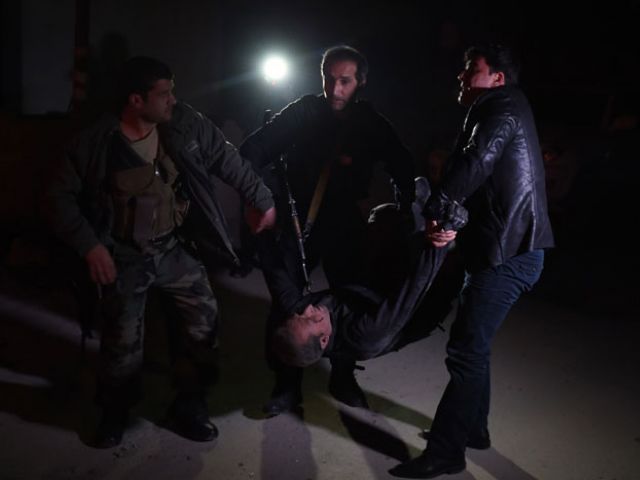 Afghan security personnel carry a wounded man at the site of an attack near the Spanish embassy compound in Kabul on December 11, 2015. PHOTO: AFP

KABUL: The Taliban claimed responsibility for a car bomb attack near the Spanish embassy in Kabul on Friday, further dimming hopes for peace talks with moderate elements of the insurgent movement touted just days ago by President Ashraf Ghani.

Gunfire was reported immediately following the explosion, which the Taliban said targeted “an invader’s guest house” near the embassy in a heavily protected area of the capital close to many other foreign missions and government buildings.

Spain’s Prime Minister Mariano Rajoy confirmed that the attack Kabul was not directed against the embassy itself but the nearby guest house, even though it left one Spanish policeman injured.

Security forces with armoured vehicles were deployed around the scene. At least three insurgents involved in the attack, according to one police official.

At least seven people were brought to a hospital operated by the aid group Emergency, 700 metres (yards) from the Spanish embassy, according to a tweet from the organisation.

The car bombing came after the Taliban attacked an airport complex in Kandahar earlier this week. The attack left 50 civilians and security personnel dead, and was only suppressed on Wednesday after more than a day of fighting.

The same day, Ghani returned from a regional peace conference in Islamabad aimed at reviving stalled peace talks with the Taliban.