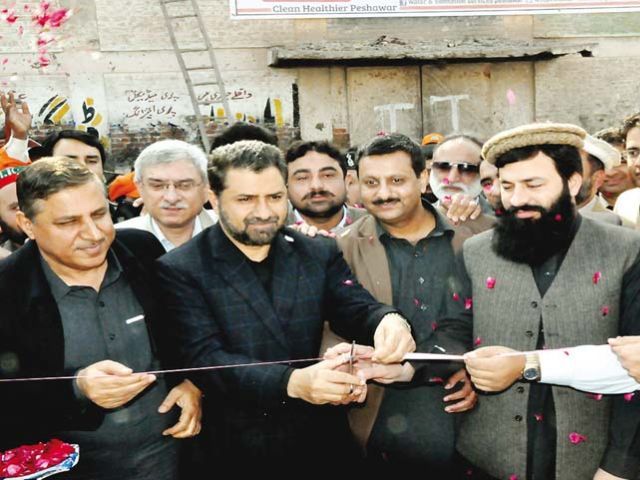 PESHAWAR: Minister for Local Government and Rural Development Inayatullah Khan inaugurated a 10-day cleanliness and awareness campaign in the city in Changarabad.

An official handout stated the campaign was launched with the slogan of ‘Safa Pekhawar’ or clean Peshawar and will be jointly carried out by Water and Sanitation Service Peshawar (WSSP), Town-1, UNICEF and NGOs falling under the WASH cluster.

The WSSP will ensure cleanliness by removing garbage and solid waste, which will be disposed of by the municipal and town administration.  The minister took an oath from all people present, making them promise they would wholeheartedly take part in the drive and make it a success.

According to the handout, Inayatullah said Chief Minister Pervez Khattak would be the chief guest at the concluding ceremony. He added the drive would be extended for another 10 days if the WSSP survey found the results dissatisfactory.

Taking a jab at political rivals, Inayatullah said it was unfortunate that the Sharif brothers only concentrated on making Lahore a beautiful city while the rest of the country was ignored. He said Peshawar was merely given hollow claims of mega projects. Its people were exploited by past regimes, said the minister.

He made assurances that the PTI-led government would usher in a new era of development to revive the past glory of the historic city.

The minister said Rs29 billion was being spent on the beautification of Peshawar, while Rs5 billion would be released to local government representatives.

He expressed his satisfaction over the WSSP’s performance over the last year, pointing out 29 million tonnes of garbage had been removed from the city. He added the authority also cleared 45,000 tonnes of heaps and dumps, which had been an eyesore for decades.

Inayatullah was confident WSSP will also honour its commitment of providing clean drinking water with the installation of a new filtration plant. He asked locals not to toss garbage in the streets, but hand it over to sanitary staff at the times fixed.

In the dark: No concrete data on number of children with disabilities since 1998