At Karachi rally, PTI, JI hit out at political rivals

At Karachi rally, PTI, JI hit out at political rivals 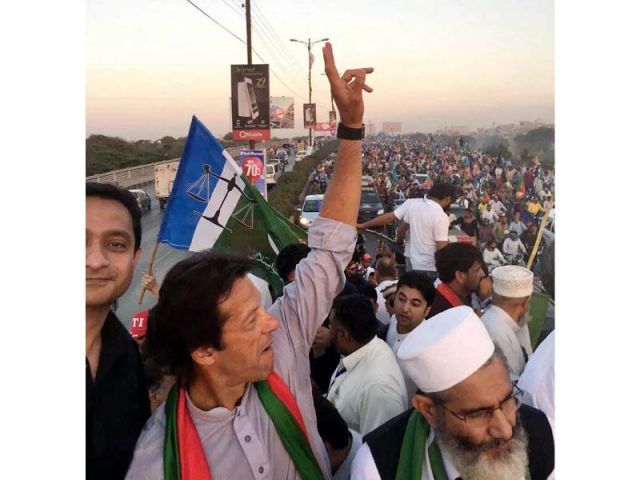 Imran flashes the victory sign at a rally in Karachi. PHOTO: NNI

The Pakistan Tehreek-e-Insaf and Jamaat-e-Islami, allies in the upcoming phase three of the local government elections, targeted their main rivals — Pakistan Muslim League-Nawaz and Pakistan Peoples Party — for criticism during a rally in Karachi on Saturday.

The PTI and JI staged a massive rally in the metropolitan city to enlist support for the LG election scheduled for December 5.

Karachi Commissioner Shoaib Ahmed Siddiqui had announced that the two parties did not seek permission for the rally, but PTI leader Imran Ismail claimed his party had formally asked for the go-ahead, but their request was ignored.

PTI Chairman Imran Khan and JI chief Sirajul Haq left the airport on a special truck, accompanied by other leaders from both the parties. They made their first stop at Star Gate on Sharae Faisal, where Imran and Siraj took turns to address their supporters.

The PTI chief said Prime Minister Nawaz Sharif had announced a development package for Lodhran this month ‘as a part of his party’s election campaign’, but the top polls supervisory body ‘did not take any notice’. He also accused the Election Commission of Pakistan of creating hurdles in PTI’s election campaign.

Shifting his focus from the federal administration to the provincial authorities, Imran accused the Sindh government of supporting the china-cutting and water mafia.

He said if Karachi’ites gave their mandate to the PTI, the party would end terrorism in the city, adding that Pakistan could prosper only if there was peace in Karachi. “The Karachi police should learn something from the Khyber-Pakhtunkhwa police, which is non-political, and only officers on merit can join the force.”

Criticising Muttahida Qaumi Movement chief Altaf Hussain, Imran said the MQM needed no external opposition for the minus-one (sans Altaf) formula, as ‘there are many leaders within the party who believe in the idea’.

Meanwhile, the JI Ameer termed Karachi ‘mother of the country’, saying that those who attempted to harm the city must be held answerable. “Karachi has been witnessing bloodshed and terrorism for many years.”

Siraj was of the view that the PTI-JI partnership would restore peace in the commercial hub of the country. Revealing JI’s plans to revive the historic role of Karachi, he said his party wanted to turn Karachi into Istanbul. “We shall make Karachi so peaceful that even Altaf will not fear returning here.”

The original plan was to culminate the rally at Quaid-e-Azam Muhammad Ali Jinnah’s mausoleum, where the leaders were to offer Fateha and deliver their final speeches.

He said there was ‘no confusion’ between the two parties. “The PTI’s rally was called off [at Jail Chowrangi] only because the speeches could not be delivered [at the Quaid’s mausoleum] as per the original plan.”

While Imran proceeded to a party leader’s residence, the JI chief moved forward to the mausoleum and delivered his final speech.

Zaidi clarified that he was informed by JI officials that since Siraj was leaving for Lahore and a large number of party workers were in attendance, the party chief decided to speak to them briefly before leaving the city. JI spokesman Zahid Askari also confirmed this to The Express Tribune.

Both the parties are expected to stage another massive rally on Sunday (today), while the PTI chief is likely to deliver a speech at the Kakri Ground in Karachi’s restive Lyari Town.