Public versus private: Mirror mirror on the wall, who is the best educator of all?

Public versus private: Mirror mirror on the wall, who is the best educator of all? 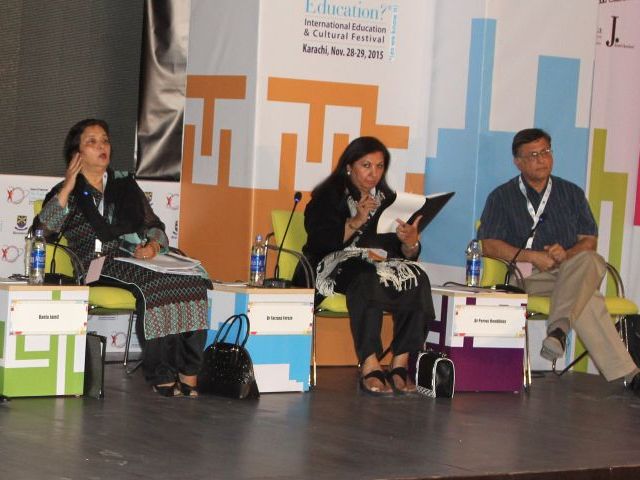 KARACHI: Are private schools enablers or dividers? Some would consider it ironic that a question of this nature be discussed at an event organised by the Beaconhouse School System – a well-established private school system. And that too by a panel that comprises the likes of educationist Baela Raza Jamil, Sindh education minister Nisar Khuhro, The City School CEO Dr Farzana Firoz and Dr Pervez Ahmed Hoodbhoy. They sat in a packed Jasmine Hall at the Beach Luxury Hotel on the first day of the School of Tomorrow conference.

And yet the moderator, journalist Mehmal Sarfaraz, dared. She started off pleasantly enough, asking the panellists what they thought of the demonisation of private schools at a time when almost 40 per cent of school-going children went to private schools. Having made her point, she rephrased her question. “Who is responsible for education?” she asked Jamil.

Creating the students of tomorrow, today

Whose job is it anyway?

The educationist started off with a bit of historical context. After World War I, she claimed, the world saw a shift in priorities and education became the responsibility of the state. In Pakistan, this responsibility was presumably taken up by the state through Article 25-A of the Constitution, which mandates education for all children between the ages of five and 16. The question, for Jamil, is if the state is actually doing its job? Sadly, no.

“Though the state says it will go all out to provide education to all children, there is no implementation of this will at the grassroots level,” she lamented. “Despite large budgetary allocations to the education sector, we are still not seeing those funds being utilised where the child is.”

She seemed to have made a strong point. The next speaker, Nisar Khuhro, treaded carefully. This was a sensitive topic to be speaking on, being the education minister. “You see, the public sector did take up the responsibility of the education sector but the shortage of infrastructure, funds and other resources stepped in,” he reasoned. “Thus, the private sector was allowed to step in and cater to the vacuum.”

For Khuhro, the primary responsibility for education lies with the state, which in turn devises various ways to reach out to the masses, for example through public-private partnerships. “We have many problems and therefore encourage the private sector to come forward if it can help us,” said the minister.

The third panelist, Dr Firoz, was of the belief that private schools were providers, not dividers. “Private schools don’t just mean ‘expensive schools’,” she claimed. “My peon and driver send their children to private schools because they want good quality education.” Dr Firoz stressed that education is the state’s responsibility and that the private sector can only act as a supplement. “Education is not a luxury. It is a need.”

When the nuclear physicist, Dr Hoodbhoy was given the chance to add his two cents, however, he completely ripped apart the diplomatic nature of the discussion that was maintained thus far. “Any society that aspires to be equalitarian must necessarily reject the notion of private schools,” he said through clenched teeth. The audience was stunned for a few seconds before the words registered and they broke into applause.

He rephrased it. “In a well-governed society, there would be no private schools.” The cheering grew louder. Khuhro grew redder. “In Pakistan, however, the state is an absolute disaster,” he continued. “They have made a mess of the education sector.” It is for this reason that Dr Hoodbhoy admitted that private schools provided a ray of hope.
The topic then moved onto the curriculum being taught in public schools. “Will someone please do us a favour by burning these books printed by the Sindh Textbook Board?” he jested, adding that he had recently reviewed a book and found 16 mistakes on one page and 22 on the next.

“Please minister sahib, can you not see what the textbook board is doing to our future generations?” he pleaded his fellow panellist.

The minister spoke about the changes in the offing. They were lost on the audience. His speech was summed up by Jamil: “The education minister and secretary say all the right things but when you go to the grassroots, there are so many issues that need to be resolved urgently.”

For Jamil, the increasing dependence on the private sector in schooling is more a failure of society than the state. “Why are we mum on these issues?” she questioned the audience.