A houseplant I named Hope

My frail plant amazingly found a spring of vitality and reminded me that hope is always ready to illuminate the gloom.
Daliah Merzaban March 19, 2012
I woke one morning and decided to name one of my houseplants Amal, the Arabic word meaning ‘hope’. This plant (a variety of yucca if I am not mistaken) had been nameless since the day I bought it from a moving sale more than six years ago. But today, I realised how much she deserved this designation.

For most of the last six years, Amal has seemed to be on her last legs. Her leaves would consistently wilt at the tips to a dry crisp or sometimes turn entirely yellow, even if I wasn't over-watering it. Unable to re-generate, one leaf would die and another would not grow in its place, leaving the trunk unusually bare compared with when I bought it. 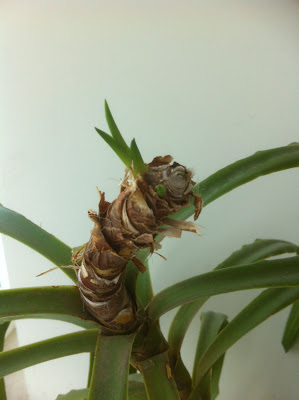 I tried various plant foods, all of which failed to give her a renewed lease on life. If I thought perhaps she was getting too much sun, I would move her to a more shady area of the apartment, and vice versa. Nothing seemed to work. If anything, the more attention I paid, the worse her condition would become. While my other houseplants have grown to become lush, this one seemed to remain limp, barely clinging onto life. She somehow managed to hobble her way through the years, dormant and unchanged unless to further deplete.

A few months ago, I thought her vigour had finally come to an end. Many of the leaves had turned yellow, then brown and within a matter of weeks I removed about a third of them. I tried relocating the plant from the living room to the bedroom, placing her on the sill of the window that stretches from the ceiling to the floor so she would get a good dose of unhindered late-afternoon rays. I was hoping a change of location would improve her mood – but it didn’t seem to be working.
Even under the care of my mother, whose green thumb has, over the years, turned many a bud into tall, massive clusters of lush leaves fit for a rainforest, couldn't seem to cast her magic on this plant. I continued to remove dying leaves from the plant. Affectionately, I would carefully clean the leaves individually with water and caress them, whispering the words "Bismillah", "In the name of God". 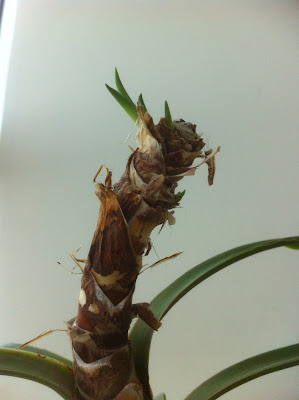 So, to be honest, I stopped paying attention and with a heavy heart, assumed there was nothing I could do to prevent the plant’s inevitable demise. Every living thing has its life span and if it was time for her to finally diminish, all of my efforts would fail.


Then, in my neglect, the plant discovered hope again all on her own. I didn’t really notice the change as I quickly watered it each week without inspection. My mom was out of town and my sister and I had been travelling, too, so the health of the plant wasn't the focus of my attention. Yet, somewhere along the way, I no longer needed to pull off dead leaves, and the ones that were left, started to slightly perk up.

As I lay in bed this morning preparing to get up, I looked over at the plant and was surprised to notice from the top of the stem (which I had declared dead months ago) a new green shoot had emerged. I went over to inspect the stem and noticed several buds peaking out at the uppermost part of it. Lower down, glimpses of green could be seen trying to push their way out too. An unusual resurgence that I hadn’t seen happen in previous years. This time, something was different. My frail plant, had amazingly found a spring of vitality that had perhaps been brewing internally.

"Subhan’Allah", the Arabic phrase that roughly translates as "Glorious is God", I said aloud with enthusiasm. Then, the first word to come to my mind was “hope”. What better way to encapsulate the enduring concept of hope than by watching this plant, all on its own, find a way to revive itself and continue living.

So that’s what I will call her from now on; Amal. She reminded me, as I often need to be reminded, that when we are in the midst of a persistent struggle, hope is always ready to illuminate the gloom, even when those around us may not see it. Often concealed and quiet, hope can hide within a dormant body unseen until the fruits of its existence begin to emerge into our view. 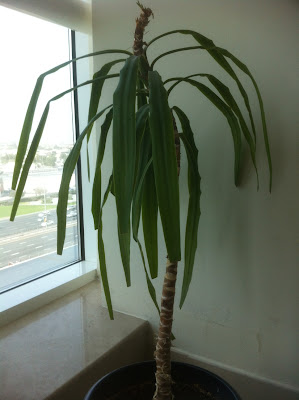 There is always a chance to discover the might within us, to revive our spirit and come back more vibrantly than before. While God may hand us many challenges to overcome, none of these is too great for our souls to bear. The peace of mind that springs from embracing this idea is a constant challenge in itself, but one that provides us the most practice in faith and virtue.

This piece was originally published here.

WRITTEN BY:
Daliah Merzaban An Egyptian-Canadian journalist, editor and economic analyst with a decade of experience in the Gulf region, Egypt and Canada. To read more of her views on Islam, spirituality and Arab women, visit http://daliahm.blogspot.com or follow her on Twitter @Desert_Dals.
The views expressed by the writer and the reader comments do not necassarily reflect the views and policies of the Express Tribune.

hope1 | 10 years ago | Reply precious. very nicely put :)
Girl | 10 years ago | Reply excellent blog! and very inspiring. Keep up the good work =)
VIEW MORE COMMENTS
Humanity | 10 years ago | Reply Only a sensitive, loving person would keep on caring for a comatose plant and derive hope from its recovery and restoration. Kudos to you Dalliah! The world could use many more of your tribe.
Sana Hameed Baba | 10 years ago | Reply Love this, I am surprised people miss commenting on the more important blogs like this one. well done :) May Amal last forever.
Silent Observer | 10 years ago | Reply so far the best blog i've come across which has helped me strengthen my faith & hope to face comes what may in life. i read the following quote somewhere on ET and perfectly describes my feelings after going through this beautifully written blog... its been a long cold lonely winter; here comes the sunshine Two Thumbs up for Daliah Merzaban
Representative | 10 years ago | Reply Nice! indeed it's hope that keeps us going.
Replying to X
Saved ! Your comment will be displayed after the approval.
Error !
Error! Invalid Email.