OPINION Sindh: the mother of lands

Labourers carry sacks of onions from a truck at a market in Lahore. PHOTO: AFP

The economics of Pakistan’s trade

International trade is premised not on the ability to produce an output with lower inputs than other nations but on the appetite to forego the least quantum of the other commodity for the sake of making another. Hence, countries direct resources towards goods they have a comparative advantage in and import ones in which others incur a lower opportunity cost. The net result is a supplemental quantity of all the outputs to consume, leaving the partaking parties better-off.

Countries have a comparative advantage in certain commodities on the basis of variation in weather and resources (factors of production). Some are richly endowed with a distinct natural resource while others possess inexpensive labour. This elucidates why the US exports aircrafts, Saudi Arabia crude oil, and Brazil coffee.

The opinion of academics varies immensely on the efficacy of trade. Free trade proponents assert that trade openness effectuates economic growth in an economy. On the flip side, protectionists consider trade counterproductive to growth. Some also deduce a causal relationship, arguing that trade openness is a mere by-product of growth in the economy’s real side (growth-led trade).

In Pakistan’s case, trade openness and GDP per capita are positively correlated though the correlation remains a meagre 0.008 from 2000 to 2019. Pakistan remains the least open country for trade in Asia (2019) and the second-last performer in the MSCI emerging markets group ahead of Brazil (2019). The average in the MSCI emerging markets category is 72.7%, while the Asian average hovers above 100%. The graph below portrays a murky picture of Pakistan’s trade status over the last two decades compared to China, India, and Bangladesh. 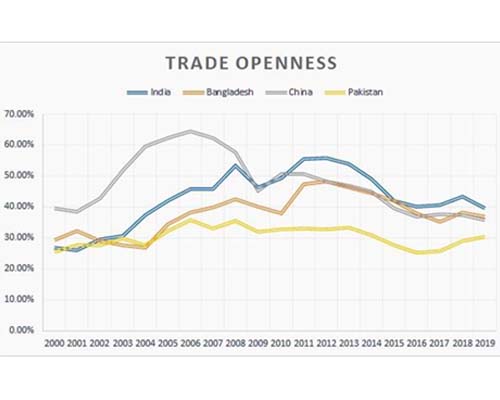 The reason for Pakistan’s appalling trade as a percentage of GDP outlook is that imports have spiralled while the exports remain stagnant. Hence, the overall trade ranges from 30% to 40% of GDP. The import-export FX corridor (trade balance) shrunk recently due to a curb on imports and may be short-lived until a long-term upturn in exports.

But, this import truncate – although inevitable – had a trade-off. It made Pakistan compromise on growth and had trickledown adverse implications on the employment level. It is because Pakistan imports machinery, minerals (petroleum), electrical and electronic equipment, and chemicals that aid in industrial production. Besides, protectionist policies can have repercussions like retaliation. This reprisal is what led to the US-China trade war.

Pakistan adopted import substitution industrialisation to support the local industries. The policy which became famous during the Ayub Khan’s era continued until it was replaced by export-led industrialisation in the early 1980s. Pakistan still witnesses the market failure resulting from this policy as it led to rent-seeking by local players and the citizens had to get along with inferior yet exorbitant products. An example of this is the abysmal state of Pakistan’s Japanese automotive assemblers.

The crux of pro-protectionists’ argument is the potential loss of market share to the local industries, especially the SMEs. However, their contention remains erroneous. International exposure does expose businesses to foreign competitors, but it stages an opportunity for them to integrate into global value chains. This prompts innovation and accords them with a substantial market (within and beyond the borders) to tap.

For relatively smaller economies, trade is more beneficial because the gains from comparative advantage are proportional to relative price differentials in world market and relative prices in the home country without trade. The larger the difference, the greater the benefit for a country, and vice versa.

For instance, Japan has an opportunity cost of $5000 for producing a vehicle while Pakistan has to forego $15,000 for the same vehicle. The relative price for Japan to produce that car would range from $5000 to $15,000. On the contrary, the relative price in Pakistan’s case has to be more than $15,000. So, Pakistan would be worse-off if it continues to produce that car instead of importing it from Japan.

Pakistan also has minimal trade with neighbours like India and Iran unlike what the gravity model suggests in theory. The prime trading partners include the US, UK, and Germany which are located far away. This augments the cost of imports. Moreover, Pakistan’s labour has a dismal productivity level (output/input) on average. The labour productivity not only lags behind neighbours, but also parallels many African nations.

A case of trade liberalisation should be mulled upon to savour from an increment in Pakistan’s real income. However, the industry competing with foreign manufacturers will face the music and the workers employed in those sectors may lose their jobs. In economic terms, the interest groups- protected by the successive governments for far too long- will suffer a decrease in their relative incomes. Hence it is for the government to decide between siding with special groups’ interest or national interest.

The writer is a graduate of IBA, Karachi. He has a keen interest in political economy and financial markets, and he tweets at @zohaib_jawaid.

Why PTI is at an economic crossroads