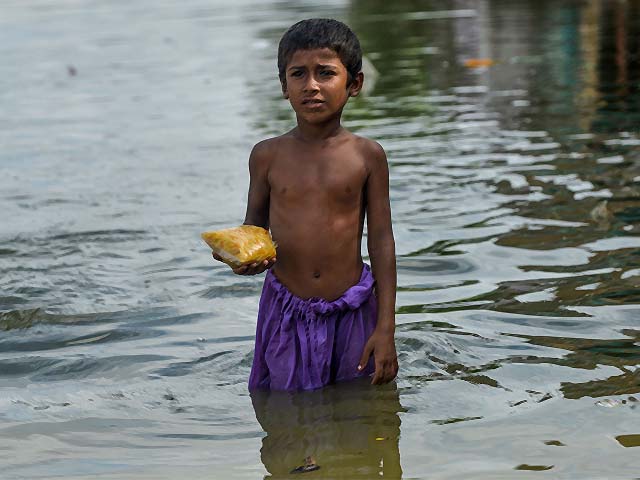 A boy wades through a flooded street in Karachi. PHOTO: AFP

The city needs a comprehensive master plan and a realistic timeline to achieve it
Mirza Ibrahim Baig August 31, 2020

As intermittent rains and urban flooding continue to ravage Karachi, each and every street of the city portrays the grim story of gruesome negligence, incompetence and mismanagement by all the stakeholders at the helm of affairs. It is as heart wrenching as it is alarming to see total chaos in the delivery of all those services that would otherwise ensure access to the basic necessities of life.

Currently, Karachi is one of the least liveable cities as per The Global Liveability Index published by The Economist Intelligence Unit (EUI) in 2019. It is ranked 137 out of a total of 140 cities surveyed based on stability, healthcare, culture and environment, education and infrastructure. Notwithstanding the fact that this spell of rain has been record breaking, the overall situation could have been much better had there not been criminal misgivings in the planning, development and administration of the city over the years. The rate at which the development of infrastructure has been taking place could not keep pace with the rapid and exponential expansion of Karachi during the past five decades. Urbanisation and commercialisation took place rapidly and new settlements evolved without any regard for the up gradation of utility services.

There was no master plan for the overall sewerage system of the city beforehand, due to which the local residents and councillors resorted to temporary arrangements of connecting the household and tertiary level sewers to the nearest natural drains (nalas). As a result, the drain channels which were originally supposed to carry rain water gradually converted into sewerage channels.

A very small percentage of the total sewage generated in Karachi undergoes basic primary treatment while the rest of it is discharged untreated into the sea. In addition to this untreated domestic waste, a huge amount of hazardous industrial waste is released untreated into the water channels, drains and the sea, thus creating health hazards and playing havoc with the environment. This is because most of the sewers don’t link up to the treatment plants, which are already poorly equipped and ill functioning. The S-III project, which was supposed to enhance the treatment capacity, has not yet been fully operational despite 14 years of delay and billions of rupees being spent on it.

Encroachments along the banks of the nalas have made matters worse, considerably reducing their widths. The drain channels have become dump yards for solid waste, while the failure to clean them for years has resulted in them getting silted up and choked. Consequently, even a small amount of rain results in back flow and the flooding of adjoining areas.

A huge sum of the taxpayers’ money is spent on the cleaning of nalas every year before the rain season begins, an activity which seems to bear little fruit since the city still becomes inundated with rain-water. Without a proper waste management system in place, it is impossible to keep Karachi’s drain channels clean. Similarly, without the resettlement and rehabilitation of encroachers, it is impractical to keep the stream-banks clear. Karachi’s problems are deep rooted and can only be resolved if they are addressed systematically.

The city needs a comprehensive master plan and a realistic timeline to achieve it. All works and services must be coordinated, and a coordinated effort can save the city from further deterioration. The implementation must also be fast paced. A great deal of political will is required and all the parties must come on one page if they wish to save the city. Public officials need to be safeguarded against mafias and be allowed to work impartially. Funds need to be disbursed on an urgent footing and their target oriented expenditures must be monitored and publicised regularly. What happens next remains to be seen, but, for now, one thing is clear: the frail infrastructure has surrendered and Karachi is at its lowest ebb.

The writer is a Civil Engineer with experience in the designing and construction of sewerage, water supply and storm water systems. He is currently residing in Canada.

One thing that I would like to add is that for more than 50 years Karachi is being robbed of it's numbers during any kind of census or "mardam shumari". Karachi crossed more than 20 million inhabitants years ago and the resources being allocated to it are short changed even before whatever is there is consumed by corruption or incompetence. Urban planning is done to consider population growth and trends for the following 10, 20 or 50 years. Karachi has always been playing catch up when it comes to any urban planning. We don't have an infrastructure that can support a population of 12 milion. In the 2017 census the population count was capped at 14.91 million whereas independent professional estimates for the population are around 30.4 million!!

A very crisp, clear and comprehensive technical analysis. Suggestions mentioned in the article are call of the day.

Superb and realistic article, but hope that some one comes and correct all the mess.