Faiz proposed a PhD in Urdu from the University of the Punjab...but his offer was rejected.
Intezar Hussain September 07, 2011

One wish Faiz was not granted was a PhD. Faiz Shinasi by Abdur Rauf Malik has the details.

New books on Faiz keep appearing. When Iftikhar Arif published a voluminous tome before leaving the National Language Authority, I thought the collection of essays should suffice for one wanting to know Faiz. But then books on Faiz followed in quick session. Finally, after Dr Taqi Abidi’s illuminating Faiz Fehmi I decided that I needed to read none of the books that might follow. But there are still three months to go in Faiz Year and the books keep getting published.

Malik’s book, it was claimed, sheds light on certain less known aspects of Faiz’s personality. So I thought I could make an exception. One of the book’s great virtues is its un-intimidating size. Also, unlike most of the books on Faiz published this year which are limited to Faiz the poet, this one talks about Faiz’s trade union career, his detention at a Lahore Fort torture cell and his career as a teacher and an educationist.

According to Malik, towards the end of 1939, when Faiz was a teacher of English at MAO College in Amritsar, he thought, possibly encouraged by his learned senior colleagues, of proceeding to London to pursue a research degree. However, the war had made maritime travel quite hazardous. The travel plans were therefore dropped. Instead, Faiz now proposed a PhD in Urdu from the University of the Punjab. An application in this respect, including a synopsis, was submitted to the University for research on the subject of modern Urdu poetry.

From this point on, Malik’s information comes from Dr Ibadat Barelvi. The university turned down the proposal with the remarks that the subject was too broad. The original proposal in Faiz’s handwriting somehow ended up with Dr Barelvi, who seeing it as unbelievable good fortune, preserved ‘an important literary document’.

The era Faiz had sought to focus on as ‘modern’ was from 1857 to 1939. Modern Urdu literature, he suggested, and most scholars will likely concur, started with Sir Syed and his colleagues. But Faiz went beyond that, seeing its seeds in the works of classical era writers.

The Progressive Writers’ Movement was peaking. The modernist movement, too, was flourishing. Both these literary movements had rejected the entire classical literature, particularly the ghazal. Progressive Writers condemned it as a product of a feudal culture and a representative of its decadent values. NM Raashed, the modern poetry pioneer, had declared the literary expression of the entire age obsolete and Josh was up in arms against the ghazal. Faiz, on the other hand, saw early signs of modernism in Mir, Sauda, Inshallah Khan, Mir Hasan, Anees and Nazeer Akbarabadi.

What this means is that while he is himself counted amongst pioneers of modern poetry along with Raashed and Meera Ji, in his assessment of classical writers’ contribution Faiz agreed with neither Raashed nor Ali Sardar Jafri.

Would it not be nice if Punjab University had approved the proposal? But how could it? Is it not just the kind of decisions it is known for?

For its rejection of the thesis proposal Dr Barelvi called it hidebound, stupid and ignorant; but had the proposal received the approval and the thesis been written along the lines, would Faiz not have been called hidebound and ignorant by the rebellious literati of his times? It may have been for the best after all that the blame still rests with Punjab University. 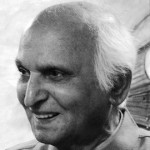 WRITTEN BY:
Intezar Hussain
The views expressed by the writer and the reader comments do not necassarily reflect the views and policies of the Express Tribune.

Cynical | 8 years ago | Reply | Recommend Having known a few Phd holders personally, I feel better that Faiz never had one. Long live his poetry and his spirits.
Replying to X
Saved ! Your comment will be displayed after the approval.
Error !
Error! Invalid Email.