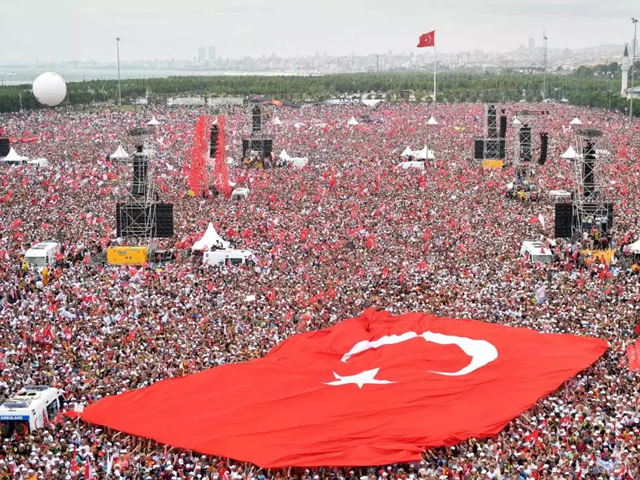 Why re-electing Erdogan will be fruitful for Turkey

Strong leadership is essential for the many challenges confronting Turkey, and no one is more experienced than Erdogan
Nasrullah Ali July 05, 2018
For the first time in history, Turkey has transitioned to a presidential system of governance. Following last year’s narrowly-won referendum with 51% votes in favour, the prime minister’s office was abolished, the powers of the Parliament curtailed, while presidential powers were bolstered.

Following the June 24th election results, Recep Tayyip Erdogan is now back in the saddle with much more power in hand than ever before. He will now rule Turkey once again for the next crucial five years, which will define the fate of the country after a failed coup against his regime a couple of years back.

What does this the new system mean for Erdogan?

With the new system, he will be the head of the government as well as the state, having the powers to directly appoint top officials, including ministers and vice presidents. Moreover, intervening in the country’s legal system and imposing a state of emergency are two other core powers. This means he will have more executive powers than he had before.

The president-elect described his victory by saying,


“Our democracy has won, the people’s will has won, Turkey has won.”

Only the years to come can prove whether Turkey will gain or lose, since it was a tough neck to neck contest, with only 52.5% votes in favour of him, with a significant turnout of 87%.

What’s next for Turkey, under Erdogan’s leadership?

Firstly, as the Turkish army fights against the Kurds in Syria, this time, Erdogan will have a pro-minority and a left-wing Peoples’ Democratic Party (HDP), which is in alliance with the Kurdish Democratic Regions Party to represent the voice of Turkey’s Kurdish minority in the Parliament house. Despite a crackdown on HDP, they were successful in grabbing the 10% threshold to make it to the Parliament. How concurrently Erdogan will tackle Turkey’s fight against the Kurds and HDP in the Parliament remains a huge question mark.

On the other hand, depreciating the Lira – which has fallen since the botched coup – has given a tough time to Turkey’s economy and led to an unfriendly investment environment. Over the last two decades, Turkey’s currency has lost three quarters of its value against the dollar, while inflation rate stands at 11%. Now that the uncertainty is over, this recent victory may provide an environment conducive for Turkey’s economy to perform better, but efforts need to be put in in order to ensure a longer rate of success.

Thirdly, Turkey’s accession to the European Union (EU) is an aim that remains to be achieved, as the human rights violations committed on civilians, military officials, political opponents and media organisations – as reported by NGOs – are looming. In case Erdogan improves the situation and meets the basic EU criteria, will he be able to achieve any success? Narratives do exist that improving its situation won’t enable Turkey to get an EU membership due to two major factors, which EU states are unlikely to accept.

Firstly, Turkey will be the largest net recipient of EU funds, and secondly, it will have more say in the EU’s parliament due to the maximum number of seats it will have, determined on the basis of degressive proportionality. This means that the more citizens a state has, the more seats it will get, but also the more citizens each member of the European Parliament will represent.

Another challenge that remains to be surmounted is over the North Atlantic Treaty Organisation (NATO) alliance. Turkey and the US have clashing interests in Syria. Moreover, Turkey’s recent overtures toward Russia are anathema to the US, especially as Turkey’s contract to purchase long-range missiles from Russia has irritated the US. Though the NATO chief has congratulated Erdogan on his re-election with the hope that NATO’s core values of democracy, rule of law and human rights will remain unhurt in Turkey, now the onus is on Erdogan to start a fresh voyage, albeit a difficult one.

Erdogan has been in power since 2003, initially as the prime minister and then as the president. Many believe he has disturbed the secular roots of the Turkey Mustafa Kemal Atatürk envisioned. After the failed coup in 2016, Erdogan has covered all lengths and has been accused of alleged human rights violations. He dismissed more than hundreds of thousands of people, including police officers, judges, teachers and soldiers, all considered by him to be his opponents. Many are in prison awaiting trial, while few have fled and sought asylum in different countries. Shutting down media houses and curtailing access to free media, cracking down on Pak-Turk schools in Pakistan and similar projects in different parts of the world, all speak volumes of Erdogan’s grating measures and policies.

The international challenges confronting Turkey are of a serious nature, requiring strong policies to be resolved swiftly. For that to happen, strong leadership is essential, and no one is more experienced in Turkey than Erdogan, as he has remained in power one way or another for more than a decade-and-a-half. This is probably one of the main reasons the people of Turkey have chosen him as their president, and given the circumstances, it seems like a good choice.

In case Erdogan continues with his previous policies, it will be difficult for non-governmental and human rights organisations to function smoothly, and at the same time, for the western powers to counter Turkey’s external policies and try to fish in troubled waters. On the other hand, if Erdogan is able to tackle all these issues efficiently, Turkey is going to emerge as a rising Eurasian regional power, becoming one of the strongest members of NATO. Let’s see how much change the Justice and Development Party (AKP) brings this time, with the broadened executive powers under Erdogan’s reign. 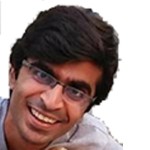 WRITTEN BY:
Nasrullah Ali The writer is a student of International Relations at University of PÃ©cs. He tweets @NAliBaloch (https://twitter.com/NAliBaloch)
The views expressed by the writer and the reader comments do not necassarily reflect the views and policies of the Express Tribune.

Patwari | 1 year ago | Reply | Recommend See, it is pathetic. You had to go back hundreds of years in the past to Mughals. Nothing recent. Lakxibai would not be proud of you. The Damodar would have probably avoided you.
Sunil Aryan | 1 year ago Mamta banerjee, Sitaram Yechury will be happy about you. India had two phases in the last 1000 years muslim invasion followed by christian invasion. If you see the amount of non-government approved deaths its less or close to zero only after 1947 not during muslim and christian invasions.
Erdem Dogru | 2 years ago | Reply | Recommend Erdogan is the greatest tyrant ever, jailing over 80,000, 18,000 women alone, people are dying in prison and now its clear erdogan, his inner circle and the dormant deep state (kemalists) made the coup which was never a coup, the coup came after and is still going on today. Hundreds of thousands have lost jobs and are ostracized from society. Erdogan borrowed heavy to invest in "cement" projects with his cronies, are all becoming wealthy thru system of kick backs. The economy is about to collapse thanks to the bubble erdogan created, 12% inflation 11% unemployment which can double in the next few months. Erdogan is an ignorant tyrant, criminal, liar and hypocrite, supporter of salafist terrorism (Al Qaeda and ISIS) who made syrian even bigger disaster.
VIEW MORE COMMENTS
Ahson | 2 years ago | Reply | Recommend The father of ISIS; he is an absolutely shameless character. He continues his ISIS, Al-Qaeda, FSA and Nusra shenanigans in Syria, even though he has zero hope of success. What a disgrace for Turkey.
Crikey | 2 years ago | Reply | Recommend Erdogan is a disaster for Turkey. He's undoing everything that Kamal Pasha, the founder of modern Turkey, strived for. It's what was done to Pakistan, the vision of its founder, M. A. Jinnah, forgotten. The Turkish military has been emasculated - who will defend the secular constitution now?
vinsin | 2 years ago What was Jinnah vision?
Parvez | 2 years ago | Reply | Recommend You have enumerated many problems that Erdogan is and will face but at the end of the day it will be his handling of the economy and the resultant welfare of his people that will matter......if he fails there he will be swept away.
Erdem Dogru | 2 years ago Too late.... he was elected dictator and tyrant-in-cheif (thief). Erdogan will sit in his palace until our Creator takes his life!
Patwari | 2 years ago You are saying it's OK to have civil evils, as long as a strongman/PM/ President provides jobs, a chicken in every pot, social welfare, with the economy moving along. Then it is acceptable if your civil rights are non existent. It is OK if there are severe human rights violations going on in the country. Meaning Turkey...by extension Pak. So all these socially engineered evils and abuses by Erdogan should not be a problem for the Turks? Unfortunately it does not work that way. You are very wrong. Here is an example for you :- Trump's administration started separating children from their families at the US southern border. A clear violations of human rights. Whichever way you look at it. Plus other nefarious things Trump has done, so far....Muslim Ban... The US economy is the best it has been in the last 50 years!! Jobs available everywhere in the US. YET people came out in the MILLIONS, ALL OVER the country to protest against Trump. To stand up against evil. And do the right thing. Which a civil society does. Erdogan is flaunting human rights. Is aiding and abetting terrorists in Syria. Is helping Saudia kill Houthis in Yemen. And you are condoning all this. As long as a person has a job, food on the table, welfare, then he/she should be happy,... look the other way. Very sad and shocking coming from you. Very surprised. But then you support Trump... Ooops! Forgot. You said "Zia had grand plans for Pakland" ! He nearly destroyed it. Even your contemporary Aurangzeb would be flinching in his grave.
Rex Minor | 2 years ago It is for this very reason that the majority of Turkish citizens gathered around Erdogans vision of independence. Let no one underestimate the will and commitment of this Nation to democracy and the wellfare of ummah/humanity. It is fully aware of its ottoman heritage and committed to association with pan European political ambitions as well as NATO military alliance on reciprocal basis recognising of its dissense and friction with right wing Governments and trumpers.. Rex Minor
Sunil Aryan | 2 years ago | Reply | Recommend One of the moderns sciences biggest m*r*n, want to remove Darwins theory from textbooks and people support him :-)
vinsin | 2 years ago They have the right to do so in democracy.
Syed | 2 years ago | Reply | Recommend Many bad democratically eldcted rullers r better than one good autocratic leader.
Replying to X
Saved ! Your comment will be displayed after the approval.
Error !
Error! Invalid Email.