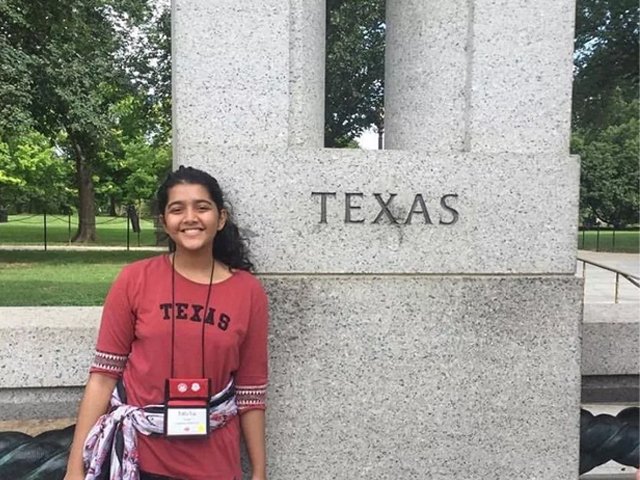 Sabika was killed in the US, she wasn’t killed in Pakistan; her country trusted our country to take care of her, and look what we did. PHOTO: TWITTER 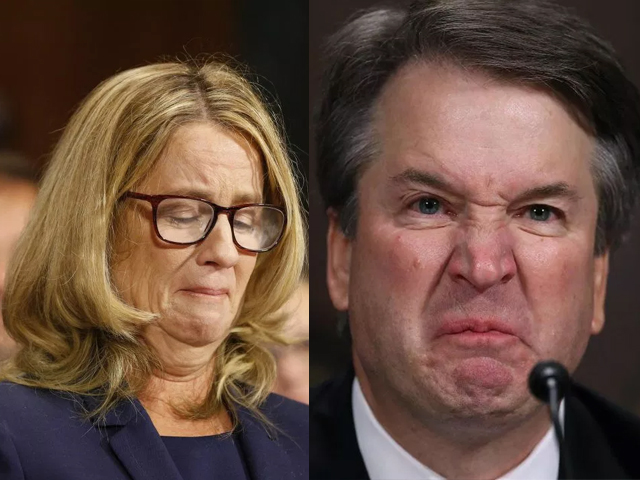 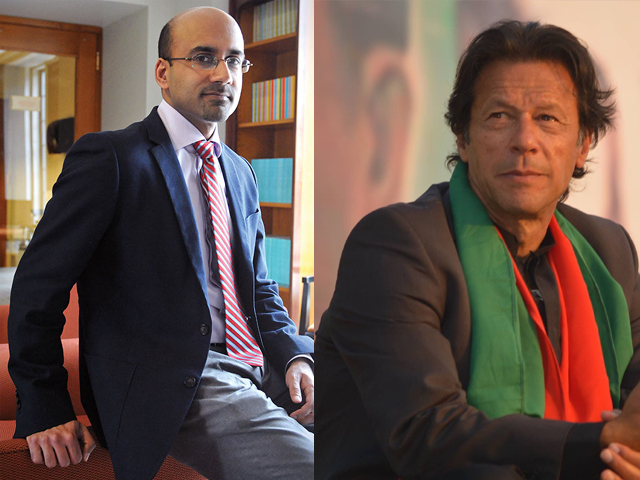 Dear Imran Khan, I understand why Atif Mian had to go

When the gun is the law, how far are you willing to go to save your children?

"Her country trusted ours to take care of her, and we sent her back in a coffin. How hypocritical are we for...
Bisma Tirmizi May 28, 2018
Friday, May 18th.


“A 17-year-old Pakistani exchange student died in the Santa Fe school shooting. I saw it on social media.”

I immediately checked the headlines on leading newspapers from Pakistan, unreported at the time. It was a little after 4pm in the US.

The first thought that crossed my mind was, do her parents know?

What if they don’t?

What if they find out from social media?

Why did this have to happen?

Pakistani Exhange Student Sabika Sheikh was killed today in Texas in school shooting, a terrorist act. May God bless her soul & bless her family with courage to bear this loss. US Guns Laws have made it insecure for all as NRA holds US hostage and denies this act as terrorism pic.twitter.com/NEB0tLWPe7

Shocked & saddened by the tragic death of Sabika Sheikh our Pakistani Honour Roll exchange student in the Santa Fe school shooting in USA. My prayers go to the family - May Allah give them the strength to cope with such an irreparable loss. pic.twitter.com/dqgO8lLSAW

The why has been asked countless times since the Columbine school shooting some 20 years ago, and the answer is so obvious. The solution is easy – ban the damned guns – but tragically, no one wants to do the right thing.

I looked to my daughters – both are high schoolers. They looked pensive, sad, and for some reason, more disappointed than angry.


“Do you want to have a conversation about this?” I asked.

Shaking her head, my 16-year-old answered my question.


“As a Muslim-American of Pakistani descent, whose parents were born and lived there until their marriage, I am heavily impacted by Sabika Sheikh’s death – one of the few in the last half a year or so. It really caused me to think, to mourn, and to want to act. I love my parents’ home country, a place under a lot of scrutiny in the US, and Sabika’s undying desire to learn, to mend relations, and to grow up and become a diplomat should not, and will not be forgotten.

I, as an American teen, have grown numb to the weekly attacks on schools and the idiocy and ignorance of our federal and local governments. Every time I hear of one of these attacks, I know these victims, and kids like me, will be spoken of briefly instead of being avenged.

Sabika could have been my friend or colleague, and more importantly, she is of my culture and people; a very powerful similarity that unites us in a way that America’s people know not how.”

Sabika Sheikh, the foreign exchange student from Pakistan who died from the Santa Fe shooting, was fasting when she died. Her host family also fasted with her and they are fasting today in honor of Sabika. May Allah grant her the highest rank in Jannah iA. 💔

An 18-year-old high school senior of Caucasian descent, responded to my question, well, with a question of his own.


“How are these shootings any different from the shootings in third world countries? You tell me? Sabika was killed in the US, she wasn’t killed in Pakistan; her country trusted our country to take care of her, and look what we did? We sent her back in a coffin – how pathetic are we? How hypocritical are we for judging other countries?” He asked, with tears in his eyes.

Being questioned instead, I told the impassioned youth about the Peshawar school massacre. He looked at me and said,


“How is that massacre any different from the ones we have in the US? The crazed killed children there, the crazed kill children here; countless families were left mourning there, and countless families are left mourning here. However, this time, the Americans let an exchange student die. She came to experience American culture, to learn, to grow. What must the people of Pakistan be thinking? I’m so sorry Pakistan, for not taking care of one of your own. Can you imagine if an American student had been killed in Pakistan in an incident such as this? Apparently America likes its guns more than its children!”

With less than a month until going home to her friends and family, Sabika Sheikh, a YES exchange student from Pakistan, was killed in the #SantaFeHighSchool shooting. If this had happened to me when I was on YES in Jordan it would be "terrorism"-why is it different when it's here pic.twitter.com/CeozGAVSRN

Sabika Sheikh’s host sister Jaelyn Cogburn, who has attended Santa Fe High for less than a year speaks at her funeral: “It was hard when I started school because I didn’t know anybody, but then I met Sabika. She was the most beautiful, loving person I’ve ever met.” pic.twitter.com/ex9EGxoKlp

This exchange took me back to a conversation I had with a friend some three decades ago.

Sitting in her sprawling garden in Karachi in the spring of the 80s, we sat chatting, whiling away our wonder years. She was a big fan of Louis L’amour, the bestselling American novelist famed for writing western novels, while I was a fan of western movies. Therefore, we expectedly were discussing Texas, and that’s when Samira said,

“Oh, I’ll tell you why. Because in Texas, they say the gun is the law.”

I gaped at Samira, aghast.

I wondered, is she this naïve? Does she actually believe the gun is the law in Texas, or the US as a whole?

On returning home, I laughed myself silly, and remember relating the entire episode to my family, adding rather arrogantly and condescendingly,


“Samira is so naïve. She believes the 18th and 19th century US of L’amour is what the 20th century US is like.”

Thirty years down the road, and all I can say is touché, Samira!

And to bring about change, a drastic measure has been suggested by Arne Duncan, the Education Secretary under President Barack Obama. Parents, will you join Duncan? Will you be the change-makers? How far are you willing to go to save your children?

Don’t let children die – be the change you want to see. 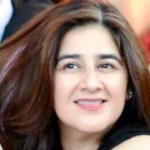 WRITTEN BY:
Bisma Tirmizi The author lives for the simple pleasures and her musings over a cup of tea almost always find a way to be the written word. She also writes for pakteahouse.net. Her book 'Feast With A Taste Of Amir Khusro', published by Rupa Publications, is available in stores now.
The views expressed by the writer and the reader comments do not necassarily reflect the views and policies of the Express Tribune.

Gratgy | 2 years ago | Reply | Recommend From the title I thought the article was about Pakistani tribal areas
Patwari | 2 years ago More like Hindustani Kashmir.
F Muldoon | 2 years ago | Reply | Recommend Regrettably, this opinion piece is factually incorrect and misses what the gun control argument is about. First, guns are not the law in Texas. Second, the gun reform movement is not asking for a complete ban on all guns. That is not a viable solution in this country, which as the writer might be aware, has a culture of legal gun ownership. Sabika's death is a tragedy, just as the killing of any person, especially children in school is. And yes, the shootings in the USA will not stop until something is done about guns. The gun reform movement is asking for common sense changes that will protect innocent lives. In essence, this means (1) a ban on military style assault weapons, (2) universal background checks on the purchase of guns, (3) mandatory waiting periods when purchasing a gun to ensure complete background check takes place, and (4) education of gun buyers to ensure responsible use and storage of their weapons.
VIEW MORE COMMENTS
Parvez | 2 years ago | Reply | Recommend I happened to read somewhere that in 2018 upto date there has been one school shooting per week in America and that is alarming. Lovely, little, innocent Sabika was in the wrong place at the wrong time ..... let us not downplay the fact that along with her 9 other innocent children died. Will something be done about this ? I doubt it because if it were to happen, it would have happened by now. Yes, what we can be fairly certain of, if we are to rely on facts, is that pretty soon another school shooting will happen ....... for a country like America this is shameful.
sterry | 2 years ago It is tragic that so many died and continue to die in school shootings in the US. It becomes even more preposterous when we hardly had the Florida shooting pass and everyone was hopeful that there would be stricter gun laws but no - the gun lobby was able to outmaneuver the kids who were demonstrating for change. We often forget that more people die on a daily basis of guns in an American city compared to any city in Pakistan. Mind you, crime and accidents can happen everywhere. My heart goes out to the families of all those who lost their lives.
Replying to X
Saved ! Your comment will be displayed after the approval.
Error !
Error! Invalid Email.