On the very day speculations over his test future were rife, I telephoned Murali, a routine journalistic call to confirm if these rumours were indeed true. Honest as always, he categorically said, in true Murali fashion “After this Indian test, I am not playing test cricket anymore.” He went on to emphatically suggest that we have not seen the last of him. Of course, as a journalist, you were never away from a great quote any time you interviewed Murali.
Venkat Ananth July 17, 2010
One of the greatest stories of this generation might be coming to an epic end. It’s not just a story of a sportsman’s ability or the undisputed talent that a man can possess, but one which epitomises the triumph of strong human character. It is also a story of a man who knew he was past his peak, his body had gone through 18 years of wear and tear and he was honest enough to decide to walk away from the game, rather than be pushed or even nudged to do so. Muttiah Muralitharan’s illustrious career was one of undisputed talent, unconventional genius, and some wickets to boot. It deserves to be celebrated and cherished.

On the very day speculations over his test future were rife, I telephoned Murali, a routine journalistic call to confirm if the rumours were indeed true. Honest as always, he categorically said, in true Murali fashion “After this Indian test, I am not playing test cricket anymore.” He went on to emphatically suggest that we have not seen the last of him. “If selected, I will definitely continue playing the IPL.”

The story of Muttiah Muralitharan is pretty much the story of Sri Lanka cricket as we know it today. He came at a time when they were undoubtedly a fledgling test-playing nation. Winning the odd home Test or series, it was a familiar story of Asian sides struggling abroad. It took Murali a while to settle down and get used to the demands and questions posed by Test cricket, but once he got going (particularly post-1994) he was hard to stop!

By the end of the famous Boxing Day Test at the MCG, his unique action had became a talking point in world cricket. Umpire Darrell Hair no-balled him for throwing 8 times in 2 overs, and that proved to be a turning point for Murali - the bowler and the person. Romesh Kaluwitharana, Sri Lanka’s  wicket keeper at the time told me that the MCG incident changed Sri Lankan cricket forever. “We were so disappointed with what happened to Murali. If he was really a chucker, why wasn’t he called earlier,” he said. “We wanted justice. He was a young boy who had a big future in the game. After that Australian tour we were desperate to win the World Cup - for Murali.” And they did. On an epic night in Lahore the Sri Lankans won the cup and thus began my admiration for both Sri Lankan cricket and Muttiah Muralitharan.

Some may remember him for his unique, often controversial action, but how can one forget his historic battles with quality players. Through 18 years he took on players like Andy Flower, Brian Lara, Sachin Tendulkar and even Rahul Dravid. Even at his best, Murali had to come up with something special to get the better of these men, who clearly set out to attack him from the outset, which in turn brought out his inner genius - a delivery that came out of nowhere, and did them in. As Michael Clarke said in his tribute:

That sums up the Murali I knew and hope to see one last time -a contest which might for one last time bring out the legend in him, perhaps against the currently ranked number one team in test cricket.

Legends like him, bring the best out of you as an interviewer. Of course, as a journalist, you were never away from a great quote any time you interviewed Murali. I remember one of my interviews for Hindustan Times, where he spontaneously summed up his thoughts about both T20 cricket and the IPL. “T20 isn’t proper cricket... it was just a fun format,” he said which is true - as the game has been shortened for television viewing. On another occasion, which I remember vividly, I interviewing Tillekaratne Dilshan at The Oval Murali came out of nowhere and joked “Beware of these Indian journalists, machan! Never know what they write.” Given the way cricket is covered in the Indian media, I quietly agreed with him.

Let's set the record straight - the blame squarely lies with the ICC and those running the game. If his actions were considered dubious, they should have gone through with the process earlier. The entire mess could have been sorted in a way did not hurt Murali who has not complained through out the affair. What the ICC and member nations must now work towards is clamping down on ibowlers who seek to imitate Murali’s action and seek an easy way to glory. India (Mohnish Parmar) and Pakistan (Tariq Mahmood) have two bowlers who have rightly been condemned and subsequently had their actions remodelled and rehabilitated.

I feel at the bottom of his heart, Murali knew his time was up. For a man who played 18 years of international cricket with incredible honesty and humility, Muttiah Muralitharan made a decision that was timely and in the best interests of Sri Lankan cricket, given his relative decline over the past two seasons. He who overcame challenges - not just the regular pain-barrier, but the hurt of being labelled, abused and disliked by a certain section of people - his was a career that definitely that deserves a place in the cricketing annals. Not just because of the statistics he’s earned in an almost two-decade long career, but because of the way he got his wickets. Indeed, watching a Test match involving Sri Lanka will never be the same again! 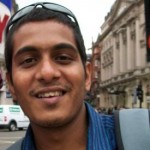 WRITTEN BY:
Venkat Ananth A freelance journalist based in Mumbai. His interests include cricket, football, international relations and blogging at vadapavgleanings.wordpress.com
The views expressed by the writer and the reader comments do not necassarily reflect the views and policies of the Express Tribune. Can we have more intelligent cricket stories, please? Commonwealth Games make us proud (but sometimes they don't) An open letter to Ijaz Butt

Umair | 10 years ago | Reply What a piece! Knocked this blog out of the stadium!
Replying to X
Saved ! Your comment will be displayed after the approval.
Error !
Error! Invalid Email.