Typing with frozen hands in Gilgit-Baltistan

The average power available to a customer in Gilgit is about four hours out of 24 hours in a day.
Shabir Ahmed March 27, 2011
To be a journalist in Gilgit-Baltistan, one requires extraordinary patience not because of the many security threats in the region, but also because of the unfavorable working conditions, especially in winter.
Access to information is not a challenge in Gilgit. It can be gathered under all circumstances ­ be it times of peace or turbulence ­ provided one has sufficient sources willing to cooperate. In fact, the G-B Supreme Court had recently ruled that access to official information is the right of a journalist, making it easier for journalists.

As far as the threats are concerned, a journalist working for an English newspaper is relatively at ease as the readership of English papers is considerably low. Thus, a majority of reports go unnoticed `thanks' to illiteracy and a lack of readership.

However, one major issue is figuring out a way to deal with prolonged power outages, which can often mean that the day's hard-earned material goes to waste, rendering one frustrated and disappointed, to say the least.

Throughout winter, the average power available to a customer in Gilgit is about three to four hours out of 24 hours in a day. If one wants to make the most of these hours, they have to be at their workplace, which is not possible at all times. And to add to it all, one is handicapped if one's workplace does not have enough heating arrangements as typing with frozen hands is near impossible.

The official reason for the rather pathetic power situation in Gilgit is ascribed to the increased consumption in winter and the decrease in glacier water which generates power.

However, the general perception is that corruption in the power department is behind the mess.

According to an Asian Development Bank report, G-B has the potential to generate 42,000 megawatts of electricity. I wonder if this will ever take form. Perhaps, and hopefully, the next generation will witness it happening.

But for now, I need to make use of the short-lived electricity to finish this blog. 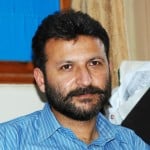 A beacon of hope in Gilgit

Will Imran Khan win hearts (and votes) in Gilgit? andrea | 10 years ago | Reply @M H Nagri: Who have you spoken to? My own relatives in Gilgit City speak of press freedom throughout Gilgit Baltistan but honestly the problem is that our own journalists are not very responsible- they have not yet adopted Western methods of objective journalism- not just in Gilgit but all over Pakistan. Yes local people there are not the most professional in the civilian posts but they have distinguished themselves in the military. The regiments from Gilgit Baltistan fought well against the Indians in every conflict. They have fought the hardest because they know it's their land and they suffered the most under the Dogras. After all, they were the first people to push for freedom against the British and Indians at the time of independence.We need to raise the standard of journalism in Pakistan.
M H Nagri | 10 years ago | Reply It is a matter of concern that the journalists of Gilgit are not enjoying press freedom because Gilgit is besieged and controlled by military as well civil bureaucracy. They are never in favour of Freedom of press. They forcefully amend and mutilate the sensitive and secret news and pressurize the journalists general and the owners of local newspapers in particular.
VIEW MORE COMMENTS
buspur | 10 years ago | Reply excuse me! will you kindly tell me what do you mean by the term journalists when you talk about the profession in gilgit-baltistan. what is being practised in the name of journalism in gilgit-baltistan is not the zillionth part of the prfession. its advertisement in the name of journalism. the one who books highest number of advertisements is termed as the best journalist in gilgit-baltistan. the job done in the name of journalism is that of an advertising exective not a reporter. lets admit it. by the way, how many stories about curroption or social issue has been filed from gilgit-baltistan in any of the print or electronic media over the last 60 years? its a shame that not a singly story about curroption has been filed by any journalist from the region. publishing statements of chief secretery, deputy commissioner and local politicians is not journalism at all. what to talk of the sectarian lines that makes the very foundation for journalism in the region. i wont talk about the mafia that has besieged journalism in the region. being from the region and practising journalism for 6 years in the mainstream media both print and electronic i know the ground reality. i attempted many a times to leave the luxury beats of reportin parliment, interior ministry and other political beats and do something for my own people in gilgit-baltistan but the trend of journalism there was disappointing. the press mafia working on sectarian lines needs a special mention here. reality bites and i am sorry if my words are difficult to swallow.
Mudassir Jehangir | 10 years ago | Reply Its time the federal government implement its development projects in the area so that not only poeple but also tourism can flourish alongside the country
Nargis Baig | 10 years ago | Reply Thats great presentation of GB situation. But who cares?
Replying to X
Saved ! Your comment will be displayed after the approval.
Error !
Error! Invalid Email.