HP on the war path: Touche’ Google and Apple?

Hewlett Packard (HP) may just win the mobile operating war it has entered with Apple and Google by leveraging webOS.
Omair Zeeshan February 24, 2011

Hewlett Packard (HP) may just win the mobile operating war it has entered with Apple and Google. And it will probably be able to do this regardless of whether their operating system (OS) is superior or not.

This is because the computer manufacturing giant is going to leverage all of its power behind webOS, (a proprietary mobile operating system running on the Linux kernel, initially developed by Palm, which was later acquired by HP) the mobile operating system which will be gracing its newly released Touchpad Tablet and two smartphones: the Veer and the Palm Pre3.

Apple introduced the usable smartphone, raising the stakes with its innovative streak. However, Google’s Android came in to the market with a competitive edge, using an ecosystem of integrated services. It used a synergised system where Google contacts, mail, voice, chat and other applications were able to coexist on multiple phones, computers, laptops and tablets at the same time. It was a solution where your e-mails and contacts coexisted on all devices and there was no need to switch.

Now, HP has done something unbelievably smart: they will leverage their ecosystem of devices which they know their customers have in spades.

Vice President and Chief Technology Officer Personal Systems group Phil McKinney said HP will start selling its computers with a layer of web OS running on top of Windows 7. The ramifications of this are phenomenal. Here is the market where they have clear dominance and if they are able to get all their customers to get used to webOS, it could prove to be promising for the company.

Add to this the fact that the PC would be seamlessly running all apps the user has on their phone and tablet, and this may well be the final piece of the puzzle HP requires to deliver on its promise of a family of devices smartly connected and aware of each other, which seamlessly sync data and are connected all the time.

All in all, HP has a recipe that spells disaster for all of its competitors. Moreover, Senior VP Personal Systems Group HP Asia Pacific and Japan Josh Brenkel says that the company sells 120 computers every minute.

That’s a lot of computers and any per centage of this would leave a lot of customers using a webOS layer and getting used to it.

Google’s android uses Gmail to sync data. HP’s webOS could do something different, like using Touchstone, an accessory that allows you to charge your phone by placing it on a dock. Also, if you touch your phone to your tablet or vice versa, the URL you are visiting transfers to the other device.

This could bypass the web for more distance based technology like Bluetooth and WiFi.

All we can do is wait to see how this plays out. 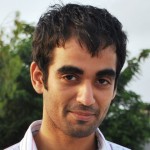 WRITTEN BY:
Omair Zeeshan Corporate Account Manager by day and photographer by night. He can be found on Twitter @OmairZeeshan
The views expressed by the writer and the reader comments do not necassarily reflect the views and policies of the Express Tribune. Qamber | 10 years ago | Reply Does this mean a deal between Micrsoft and HP, because if it is than Microsoft has destroyed Nokia's dreams of recovering as a giant in the smartphone market since HP is coming out with its products earlier.
Replying to X
Saved ! Your comment will be displayed after the approval.
Error !
Error! Invalid Email.