His strategy was simple yet brilliant. He paid nothing for advertising because everyone was already talking about him.
Miranda Peterson November 16, 2016
Build A Wall and Mexico Will Pay For It.
Ban All Muslims From Entering America.
Obama Was Not Born in America.
Grab Her by the P****.
The Election Is Rigged.


Unless you just woke up from a two-year coma, you know exactly who made these bold statements. But did the Donald ever provide details as to how he will actually make these claims happen?

Once you get past the attention-grabbing headlines, there’s no real substance to back them up.

It’s exactly like the click-bait that dominates the internet these days.

Regardless of whether you were outraged or empowered by Trump’s bold statements, you all heard and paid attention to them. His strategy was so simple yet brilliant. He paid next to nothing for advertising because everyone was already talking about him.

And no one clicked harder or faster on this bait than the media. Every single news station and pundit and YouTuber and talk show host jumped on the Trump bandwagon, squabbling with each other for viewers, ratings, likes, shares and clicks when in actuality, Trump was the sole winner all along. He was the kid paying 25 cents to toss a handful of food morsels into a small pond full of hungry koi fish splashing clumsily and clamouring over one another with mouths wide open to take the bait.

We’ve been treating entertainment stories, award shows and celebrity gossip like its noteworthy news for quite a while so we really shouldn’t be shocked that we just elected a bold, brash reality TV star to be our Entertainer in Chief. Quantity has vastly overtaken quality when it comes to just about everything in our society, including our news and entertainment, which seems to have become one in the same.

Trump limped through the real estate crisis of the 1990s so he hedged his bets (and his brand) through entertainment. You’ve seen him in movie cameos, infomercials, product endorsements and The Apprentice. The government was really the last frontier that entertainment (and Trump himself) had yet to conquer. But he has ridden in with verbal guns blazing and slaughtered all the political natives before they even knew what hit them.

On paper, this defies logic. A man with zero prior experience in our government and military was just elected to lead them both.

But logic was not a tool in Trump’s campaign arsenal. He relied on shock and awe and attention and it worked better than anyone ever imagined.

Just as all roads once led to Rome, all conversations have inevitably led to Trump since he announced his candidacy.

For example, we knew exactly what to expect from previous primaries and presidential debates which made them a boring formality. Trump completely changed the fundamental purpose of these debates. People didn’t watch them for information upon which they planned to make informed decisions, they tuned in purely for the entertainment. This is like Steve-Jobs-level reality distortion as well as revolutionary insight.

Americans read more internet memes than newspapers. We watch more reality TV and sports and talk shows than PBS documentaries. We listen to more mindless pop music than mentally-stimulating podcasts. We spend hours on social media barely scratching the surface of social issues. Trump is just a mirror of the American culture that elected him.

Have you seen the list of everything Donald Trump has promised to do on his first day in office? No president has ever accomplished everything he promised on the campaign trail during four to eight years, let alone during the first actual day on the job.

I’d like to believe it’s impossible for him to follow through with all these promises but we’ve already vastly underestimated him on multiple occasions. It’s too late to change our president for the next four years but we can work towards redefining the lines between information and entertainment and make sure Kanye West doesn’t get elected in 2020.

Consider unplugging from everything for a bit and read a non-fiction book. Have a face-to-face conversation that doesn’t involve gossip, music, movies, TV or sports. Or just sit alone in a room and think or write about something without being distracted or influenced by Hollywood, advertising, fashion and the media.

This will make America greater than any political policies, pandering or promises and you don’t have to wait four more years to do it! 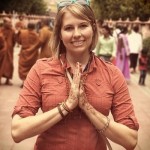 WRITTEN BY:
Miranda Peterson
The views expressed by the writer and the reader comments do not necassarily reflect the views and policies of the Express Tribune.

MR.X | 3 years ago | Reply | Recommend media was all out against trump.i also felt globalists were behind hillary. As a muslim felt trump would be good because hillary is hypocrytes.. I fear hypocrytes more
Parvez | 3 years ago | Reply | Recommend That was an interesting different view but not altogether accurate. You should have said that Hillary actually lost the elections ( due to her own and also external reasons ) and Trump was very visibly there to cash-in. The Democrats should have listened to Bernie Sanders because he correctly was pointing out what was wrong and what needed to be fixed or changed.....Hillary represented ' safe, same old, same old ', something the party was comfortable with and that was their undoing.
VIEW MORE COMMENTS
abhi | 3 years ago | Reply | Recommend This is very escapist argument. Thinking that people voted for Trump did so because of face value of his promise is foolishness. People voted for him because they found that the regular politican do not care about them. Experts and media houses completely supporting Hillary actually reinforced the impression.
AJ | 3 years ago I agree with your last point. I think the same happened in the UK referendum.
Replying to X
Saved ! Your comment will be displayed after the approval.
Error !
Error! Invalid Email.