My life as a Muslim in the West’s ‘Gray Zone’

My daughter wants to be president. I don't have the heart to tell her that Americans wouldn't vote for a Muslim.
Laila Lalami November 28, 2015

Some months ago, I gave a reading from my most recent novel in Scottsdale, Ariz. During the discussion that followed, a woman asked me to talk about my upbringing in Morocco. It’s natural for readers to be curious about a writer they’ve come to hear, I told myself. I continued to tell myself this even after the conversation drifted to Islam, and then to ISIS. Eventually, another woman raised her hand and said that the only Muslims she saw when she turned on the television were extremists.

“Why aren’t we hearing more from people like you?” she asked me.

I wanted to tell her that there were plenty of ordinary Muslims in this country. We come in all races and ethnicities. Some of us are more visible by virtue of beards or head scarves. Others are less conspicuous, unless they give book talks and it becomes clear that they, too, identify as Muslims.

To be fair, I’m not a very good Muslim. I don’t perform daily prayers anymore. I have never been on a pilgrimage to Mecca. I partake of the forbidden drink. I do give to charity whenever I can, but I imagine that this would not be enough to save me were I to have the misfortune, through an accident of birth or migration, to live in a place like Raqqa, Syria, where in the last two years, the group variously known as Daesh, ISIL or ISIS has established a caliphate: a successor to past Islamic empires. Life in Raqqa reportedly follows rules that range from the horrifying to the absurd: The heads of people who have been executed are posted on spikes in the town’s main square; women must wear a niqab and be accompanied by a male companion when they go out; smoking and swearing are not allowed; chemistry is no longer taught in schools and traffic police are not permitted to have whistles because ISIS considers them un-Islamic.

As part of its efforts to spread its message outside the territory it controls, ISIS puts out an English-language magazine, Dabiq, which can be found online. In February, Dabiq featured a 12-page article, complete with high-resolution photos and multiple footnotes, cheering the terrorist attacks of 9/11 and claiming that they made manifest for the world two camps: the camp of Islam under the caliphate and the camp of the West under the crusaders. The article ran under the title “The Extinction of the Grayzone.” The gray zone is the space inhabited by any Muslim who has not joined the ranks of either ISIS or the crusaders. Throughout the article, these Muslims are called “the grayish,” “the hypocrites” and, for variety, “the grayish hypocrites.”

On November 13th, men who had sworn allegiance to ISIS struck the city of Paris, killing 130 people at different locations mostly in the 10th and 11th arrondissements, neighbourhoods that are known for their multiculturalism. As soon as I heard about the attacks, I tried to reach a cousin of mine, who is studying in Paris. I couldn’t. I spent the next two hours in a state of crushing fear until he posted on Facebook that he was safe. Relieved, I went back to scrolling through my feed, which is how I found out that my friend Najlae Benmbarek, a Moroccan journalist, lost her cousin. A recently married architect, Mohamed Amine Ibnolmobarak was eating dinner with his wife at the Carillon restaurant when an ISIS terrorist killed him.

It was probably not a coincidence that the Paris attacks were aimed at restaurants, a concert hall and a sports stadium, places of leisure and community, nor that the victims included Muslims. As Dabiq makes clear, ISIS wants to eliminate coexistence between religions and to create a response from the West that will force Muslims to choose sides: either they “apostatise and adopt” the infidel religion of the crusaders or “they perform hijrah to the Islamic State and thereby escape persecution from the crusader governments and citizens.” For ISIS to win, the gray zone must be eliminated.

Whose lives are gray? Mine, certainly. I was born in one nation (Morocco) speaking Arabic, came to my love of literature through a second language (French) and now live in a third country (America), where I write books and teach classes in yet another language (English). I have made my home in between all these cultures, all these languages, all these countries. And I have found it a glorious place to be. My friends are atheists and Muslims, Jews and Christians, believers and doubters. Each one makes my life richer.

This gray life of mine is not unique. I share it with millions of people around the world. My brother in Dallas is a practicing Muslim — he prays, he fasts, he attends mosque — but he, too, would be considered to be in the gray zone, because he despises ISIS and everything it stands for.

Most of the time, gray lives go unnoticed in America. Other times, especially when people are scared, gray lives become targets. Hate crimes against Muslims spike after every major terrorist attack. But rather than stigmatise this hate, politicians and pundits often stoke it with fiery rhetoric, further diminishing the gray zone. Every time the gray zone recedes, ISIS gains ground.

The language that ISIS uses may be new, but the message is not. When President George W. Bush spoke to a joint session of Congress after the terrorist attacks of 9/11, he declared,

It was a decisive threat, and it worked well for him in those early, confusing days, so he returned to it.

This polarised thinking led to the United States invasion of Iraq, which led to the destabilisation of the Middle East, which in turn led to the creation of ISIS.

Terrorist attacks affect all of us in the same way: We experience sorrow and anger at the loss of life. For Muslims, however, there is an additional layer of grief as we become subjects of suspicion. Muslims are called upon to condemn terrorism, but no matter how often or how loud or how clear the condemnations, the calls remain. Imagine if, after every mass shooting in a school or a movie theatre in the United States, young white men in this country were told that they must publicly denounce gun violence. The reason this is not the case is that we presume each young white man to be solely responsible for his actions, whereas Muslims are held collectively responsible. To be a Muslim in the West is to be constantly on trial.

The attacks in Paris have generated the same polarisation as all previous attacks have. Even though most of the suspects were French and Belgian nationals who could have gained entry to the United States on their passports, Republican governors in 30 states say that they will refuse to take in any refugees from Syria without even more stringent screening. Barely two days after the attacks, Jeb Bush told CNN’s Jake Tapper that the United States should focus its efforts only on helping Syrian refugees who are Christian.

Ted Cruz went a step further, offering to draft legislation that would ban Muslim Syrian refugees from the United States. When he was asked by Dana Bash of CNN what would have happened to him if his father, a Cuban refugee who was fleeing communism, had been refused entry, he implied that it was a different situation because of the special risks associated with ISIS.

As it happens, I am married to a son of Cuban refugees. Like Cruz’s father, they came to this country because America was a safe haven. What would have been their fate if an American legislator said that they could not be allowed in because the Soviet Union was trying to infiltrate the United States?

The other day, my daughter said to me, “I want to be president.” She has been saying this a lot lately, usually the morning after a presidential debate, when our breakfast-table conversation veers toward the elections. My daughter is 12. She plays the violin and the guitar; she loves math and history; she’s quick-witted and sharp-tongued and above all she’s very kind to others. “I’d vote for you,” I told her. And then I looked away, because I didn’t have the heart to tell her that half the people in this country — in her country — say they would not vote for a Muslim presidential candidate.

I worry about her growing up in a place where some of the people who are seeking the highest office in the land cannot make a simple distinction between Islam and ISIS, between Muslim and terrorist. Ben Carson has said he “would not advocate that we put a Muslim in charge of this nation.”

Right now, my daughter still has the innocence and ambition that are the natural attributes of the young. But what will happen when she comes of age and starts to realise that her life, like mine, is constantly under question? How do you explain to a child that she is not wanted in her own country? I have not yet had the courage to do that. My daughter has never heard of the gray zone, though she has lived in it her entire life. Perhaps this is my attempt at keeping the world around all of us as gray as possible. It is a form of resistance, the only form of resistance I know. 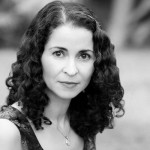 WRITTEN BY:
Laila Lalami Laila Lalami is the author, most recently, of â€œThe Moorâ€™s Account,â€ a finalist for the Pulitzer Prize in Fiction.
The views expressed by the writer and the reader comments do not necassarily reflect the views and policies of the Express Tribune.