What’s with the football craze these days? Cricket or football, please choose? Well, for all those football-lovers out there aren’t these questions just so annoying? Why do some of us in Pakistan take offence if there has been a recent liking for football among the youth? Regardless, there is no denying that hockey remains our national sport, and cricket our nation’s pride. Sports in general are becoming a great source of television entertainment and with our cricketers not providing much, and footballers making for better eye-candy, it is indeed becoming the preferred sport among the youth. So for all those cricket apologists who do not buy into the whole football hype, and consider those who are avid watchers and players of the game as ‘westernised’ and  ‘unpatriotic’, sit back, relax and sip some iced coke because its the Fifa World Cup fever this summer. And why not?

Club football and its broadcasting in Pakistan has made the sport ever so popular in our country. Perhaps it is a change in the entertainment aspect too, but most young people are now glad that Pakistan has become more globally integrated and ‘modern’, rather than the one-track bat-and-ball mindset, which denounces any other sport as more entertaining than our very own, cricket. People who already follow club football, have an affinity with the players, and are die-hard fans of Arsenal, Chelsea, Manchester United etc., considering the world cup a real test for their favourite players. According to a poll conducted by tribune.com.pk, Pakistanis, as we would suspect, are conservative in picking their team and are going with tradition: to chose the already five-time champions, Brazil.

A friend thrillingly said during the Brazil vs Côte d'Ivoire match: “Watching the games is more than patriotism. The entertainment value is huge because of the upsets that always happen.” They say cricket is the metaphor for life. I agree. But football is its merriment. 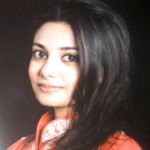 WRITTEN BY:
Sadia Ahmed The writer is a graduate of Mount Holyoke College and SOAS University, currently working for the Editorial pages at The Express Tribune.
The views expressed by the writer and the reader comments do not necassarily reflect the views and policies of the Express Tribune.

The importance of being heard Weddings: Taking it to the next level