The ground beneath his feet

For his solo exhibition, Farrukh Addnan turns ground of his hometown Tulamba into an enduring source of inspiration

Many of us walk the earth with our gaze held in front and our thoughts in the clouds. But Farrukh Addnan makes the ground beneath his feet the subject of a multilayered enquiry. He has an abiding connection to the land of his birth, namely, the town of Tulamba in the Punjab. The ground of Tulamba, quite literally, becomes an enduring source of inspiration for his refined and meditative art,which maintains a strong focus on drawing and mark-making.

Farrukh’s current solo exhibition at Chawkandi Art, titled The Past is Another Country, reveals the artist in full control of his highly abstracted narrative style, conveyed through mark-making. 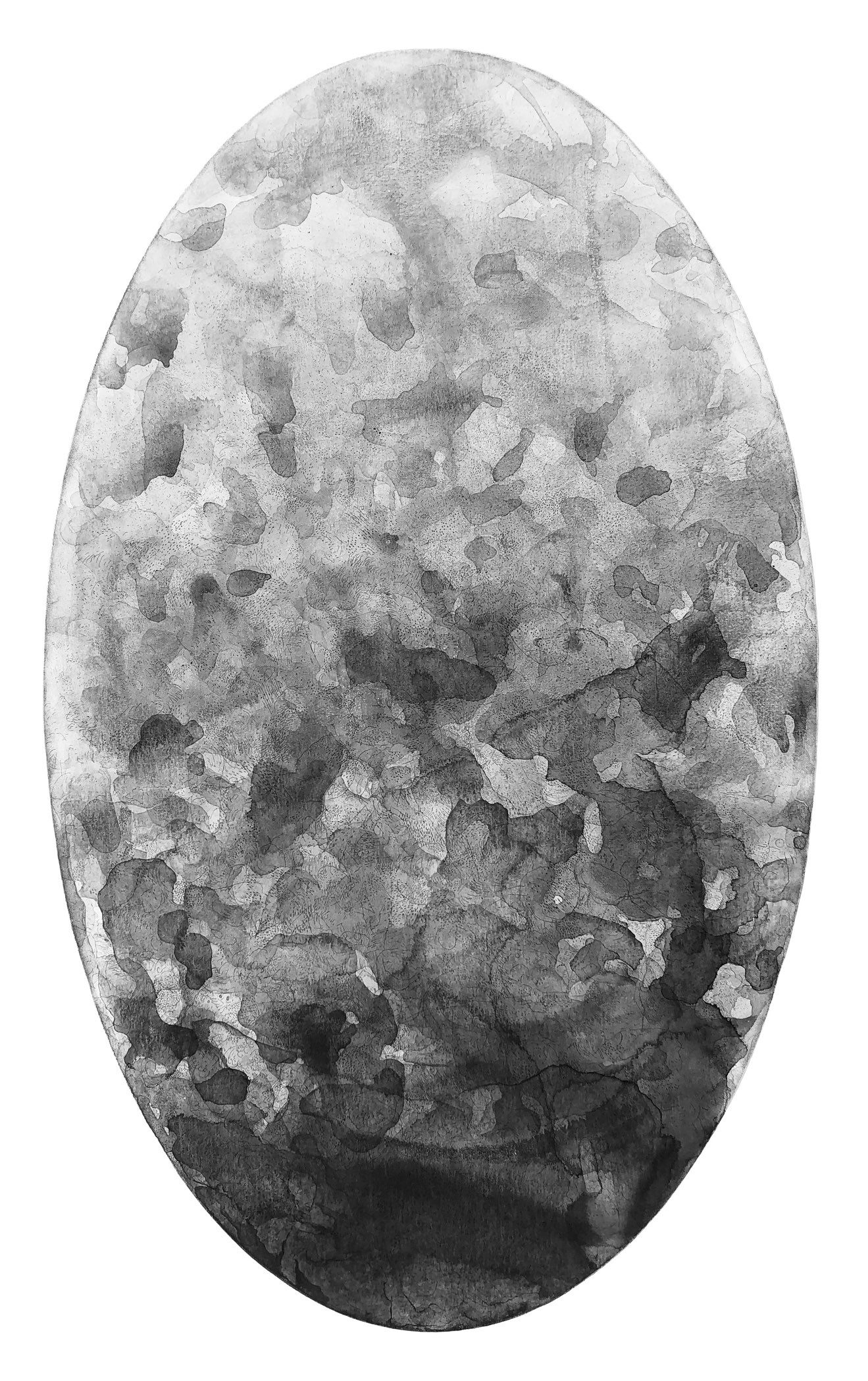 Farrukh’s artistic inclinations have led him to explore the terrain of Tulamba in the manner of an archaeologist or cartographer. The artefacts he recovers from his explorations are not physical remnants. Rather, they are impalpable artefacts of memory, recalled over time and space, revitalized by every visit to Tulamba from his current base in Lahore.

Farrukh has studied the topography, the soil, the curves and contours of the land. By walking, Farrukh recharges his connection to it with each step. This artful exploration is sublimated into symbols that constitute a unique language. Using dots, dashes, and hieroglyphic marks, Farrukh “maps” his reading of the land in the manner of a cartographer. The physical attributes of the terrain undergo a transformation from their material condition into a symbolic representation of his perceptions.

The symbolic representations in Farrukh’s art may be understood as having undergone a process of encoding. The encoding involves subjective aspects of cognition such as emotion, memory, recall, and intellectual curiosity. With these ingredients, Farrukh creates an extraordinarily personal narrative that is abstracted in symbolic form, much like an algebraic equation.

Farrukh creates a map of an individualized cosmos that comprises natural elements combined with cognitive processes. In The Past is Another Country the idea of the cosmos is brought to attention by the “egg” shaped ellipse which is a dominant feature in the artwork. 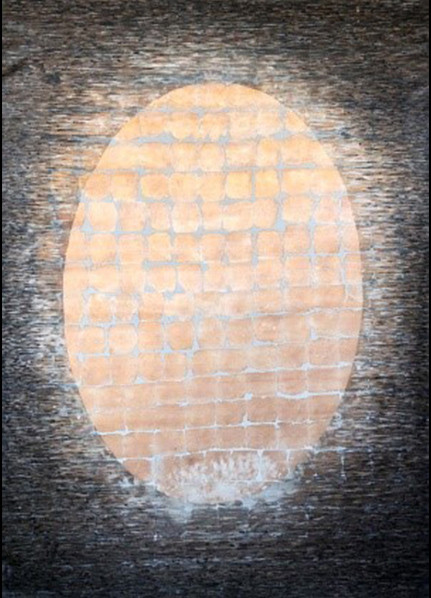 The cosmic egg, one may recall, is a universal symbol in origin myths of many cultures. The elliptical egg is a primal form that encodes the stories related by diverse cultures regarding their own origins. The ellipse is also reminiscent of the shape of galaxies in the universe.Using this powerful shape, impregnated with ancient significance, Farrukh tells a story of his own origin in Tulamba.

Farrukh works primarily with pen and ink. He prefers a monochromatic palette, occasionally adding a color or two. The variation in his pattern-making technique relies on tiny strokes of the pen. Works such as Perception and Tranquility– and Oral Lore II in particular - when examined at close range, reveal the diverse patterns that have been incorporated in building shapes. Although the surface of the paper or canvas is flat, the work conveys a textured feel. The texture has dual resonance. It serves as a stand-in for the rich textures of the earth; it also represents thetextures of memory which form the abstract layer in Farrukh’s representation. 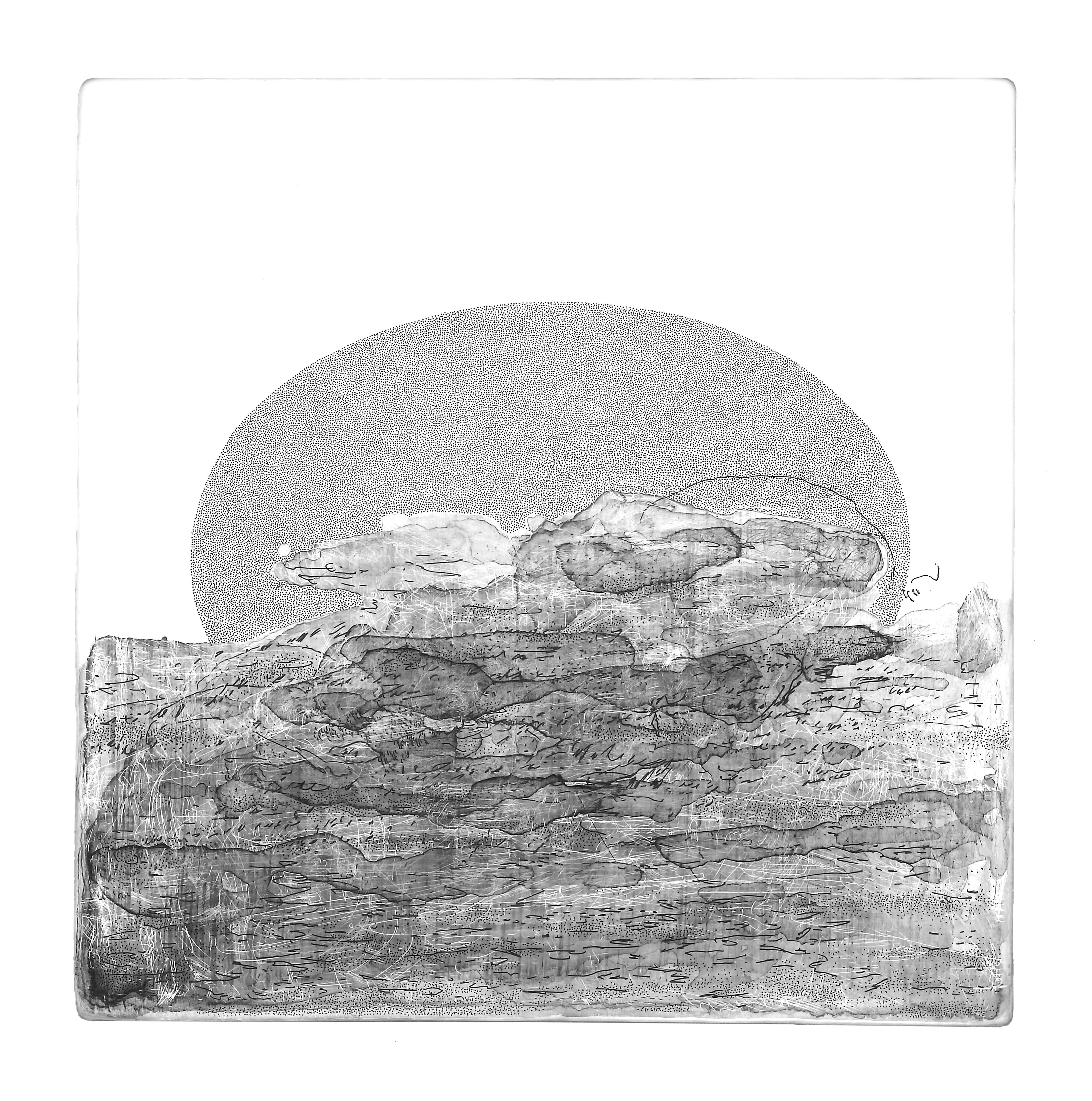 Decussate I to IX is a series of nine small works in pen and ink wash on canvas, enclosed in box frames. They consist of two elements: the ellipse or ‘egg’ form, which is overlapped by irregular mounded segments in the foreground. The word ‘decussate’ which means crossover or intersection in the shape of an ‘X’, suggests that Farrukh may be hinting at the crossover of memory with space and time. Some enigmatically titled works such as A portrait of past meeting the present underscore temporal and spatial connections.

Gleam I and Gleam II are large works on canvas that incorporate the use of oxidized silver leaf, as does the series Sounds from the Landscape. The silver leaf bestows a glowing patina of coppery rose and golden tints. One may compare the transformative process of oxidization to the transformation of an actual landscape (Tulamba) into a symbolic one (art).

Such analogies are integral to the layering complexity which invites discovery in Farrukh Addnan’s work. His self-reflections radiate from his point of origin to encompass multiple investigations. The origin is not an end in itself. It is a springboard that spans biography and cosmology through the language of signs. The past may be another country, but its echoes constitute the bedrock of future recollection.

Farrukh Addnan’s solo show ‘The Past is Another Country’ was held at Chawkandi Art from 22nd December 2022 to 2nd January 2023.

Nusrat Khawaja is a freelance writer. All information and facts are the sole responsibility of the writer.