The mystical and the mythical

The unseen seems to hold a greater influence on man and nature than given acknowledgment for. Woman’s hidden nature, from his fellow creatures and surprisingly to himself also, unfolds in dramatic and mundane forms to create a tapestry which he then tries to keep up with, not always to his liking or conscious making, yet a print he has to keep up with. Added to that is another power that seems to guide destiny, fate and the creation of Life, a power greater than man, one that is eternal, one that has guided life on the planet and the greater cosmos. And in this great unfolding man tries to grapple with the harness of life, mistakenly placing his lot with his fickle ego and the greater blinders of power and resource.

The two-person show of Zafar Ali and Ali Gillani explores this theme under the title of Darvesh – Warrior. Darvesh, a mystic, a being that walks in surrender to a higher power, in communion with a calling, with a path unseen by most and surprisingly incomprehensible to most. A warrior on the other hand seems to have no problem being understood by even the youngest child, in all of its different forms of conflict. Yet it is the true warrior who can look within him/herself and win or at least address the conflict within themselves, the unresolved polarity that then finds expression in the material.

Both trained as miniaturists, evoke their subject matter in different forms. Zafar Ali painting on the small scale of miniatures evokes a silence, a quietude in his work. Working with flat colours for a background, he portrays an inner journey, an inner quest. Using mystics who have walked the path of Universal love, defying creed and custom and living on a plane of inclusivity that involves all created beings. He unfolds this incredible inner journey that covers a struggle for detachment and independence. Detachment from the material form and the inner clamourous voice of the personality as typified by the ego and it’s attachments. The slow but sure evolution from this state to a state of Love, an all encompassing empathic quality, and to the evolution of the state of Unity, where the mind works with the heart quality of the human to respond to a higher calling, a calling receptive and received by the Heart of the created being.

The Calling by Zafar Ali

The artist uses a simplified format to portray this. The East with its long tradition of mysticism has borne mystics across its continent and our land has been a refuge for mystics over many centuries and a welcome haven for them. Zafar Ali delicately paints the mystics, the darvesh, the Sufis in their differing modes of quest and understanding, in their communion and clothing. From the scholar, the thinker and contemplator of the created universe. A cosmos as rich internally as without in the realm of stars and in the infinite array of life on the planet. To the renouncer of worldly goods as he ponders the intricacies of the created life, to the rebel saint that listens and gaze into discord, for resolution. He paints the different moods and states of the mystics in their inner journeys and quests.

Zafar Ali’s little palettes are delicious and bright, the quietude livened with the brilliant background and the cosmos, the inner and outer, and the natural world represented by myriad birds of vibrant and brilliant plumes. These birds either in solitary communion with the mystic or in a myriad flock of blazing colour represent the unfolding journeys of the mystics, of the ordinary created being in his quest for resolution, purpose and meaning. A journey fraught with peril as man looks at his fragile created state, at the vulnerability of surrender and his immense responsibility as a caretaker and interpreter of the natural world and those without a voice.

Valley of understanding by Zafar Ali

While Zafar Ali has portrayed man’s inner ascent, Ali Gillani portrays the shadow aspect of man. Working with a monochromatic palette, black and white or shades of blue or sepia red. He creates fantastical mythical beings. Using an etching style, he crafts his images into silhouettes. In this palette, in this layout he crafts an elaborate imaginary realm of pennants and monarchs, horned beings, serpentine beasts, winged heavenly figures and equestrian warriors.

To gaze at his large-scale world is to slip into an imaginary world, a shadow world, an alternate reality. The textured surface of etching, the parchment style background provide a facile conduit into this alternate reality, where man’s real battle wages. In his inner being, the lust for power, the envy, the greed, the insurmountable fear and the inevitable battle. This battle that rages within man’s heart is what has been the history of the world, with it’s unending wars, imperialist interventions and conquests, subjugations and conflicts ending in perpetuity. This battle finds seed within man, within his being, with his struggle with his base needs and a higher calling, with demons passed from one generation to the next, from the distortions of governance, of colonialism, globalization, loss of cultural context. In his work as the horned being sinks into the sea, wading in loss and confusion, as the warrior holds up a pennant as though announcing his identity and purpose in vain as he wades thigh high. Yet the horned beings seem more at loss than with malice, a state of primitive consciousness seeking to rise, the warrior with pennants, looking up as though for an way out against the oppressive cultural and state narrative. The enthroned monarch on his royal seat, as though fortified against fear, fear of loss, fear of a very mortal life. Twin beasts turned in search and quest of more, yet most of his portrayed beasts have a halo of gold, a halo of light around them as though were they to lift their heads from their primitive quest and look up there was chance at deliverance. As the though the halo was a citadel of safety, a chance for self governance and cognition, a chance for self assertion and self thought, the halo of light both a protecting circle and a citadel to draw light and understanding from. In his work the atmosphere is dark with high lights of gold, a landscape reflective of life, where to turn to the bits of light and understanding is to dispel the dark. 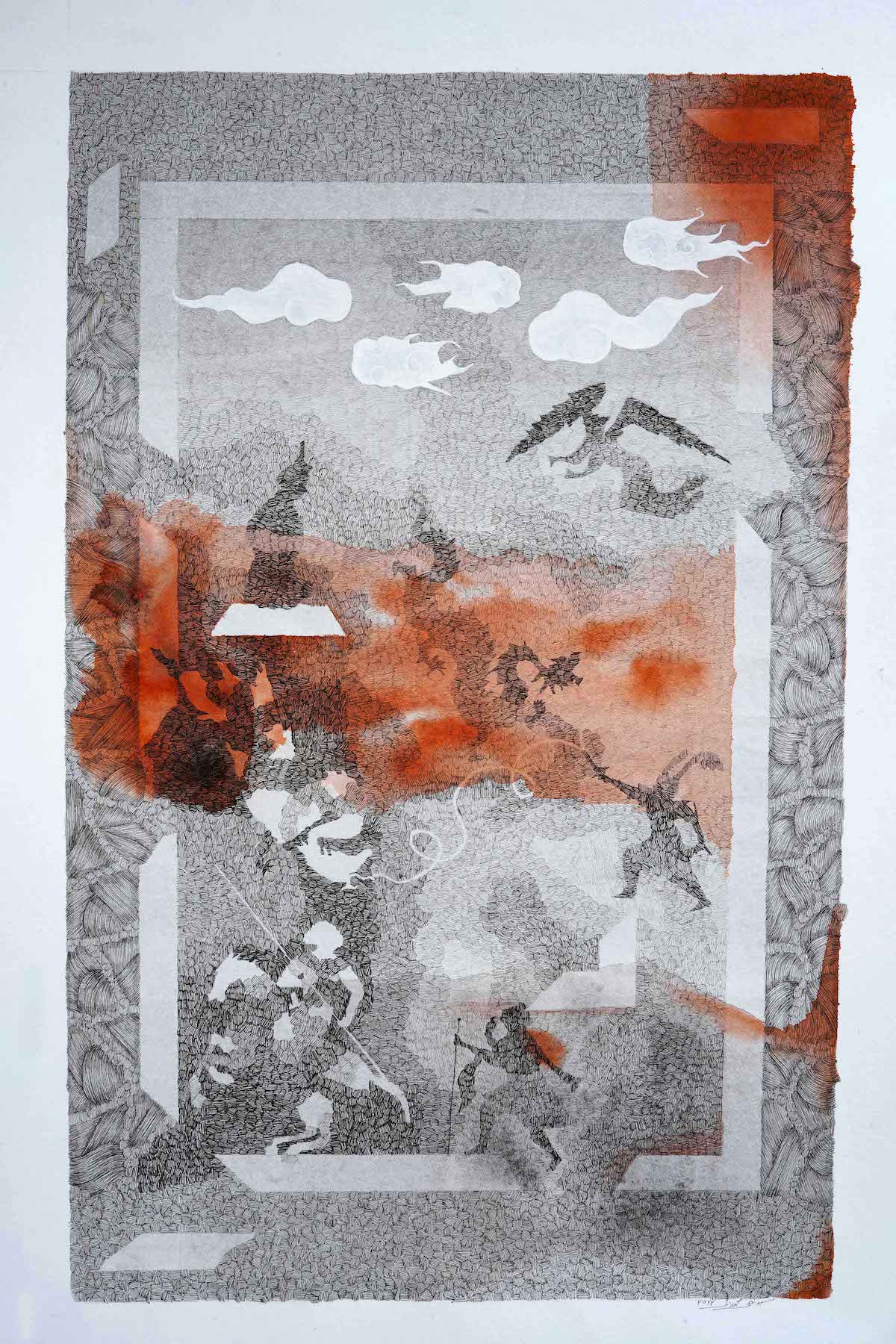 Memoirs of an Ordinary Soul by Ali Gillani

Ali Gillani’s figures dance in the shadows, sinking in the sea, flying in the heavens and at all times fighting on the mortal plane. He evokes man’s struggle, his daily fight for survival and his inner demons with facile ease. The shadow dance a veneer thin on his face.

Zafar Ali and Ali Gillani have collaborated on two pieces, one a lunar piece depicting the duality of man’s nature, his struggle to conquer his base nature, and the shadow aspect that sits festing in him. Their styles and narrative complement each other, while Zafar Ali’s is brilliant and shows man’s ascent, Ali Gillani’s is dark portraying his shadow aspect. The other is a piece depicting man’s successful ascent, a sensitive, delicate portrayal.

The show was curated by Irfan Gul Dahri, an artist and curator who is inclined towards the portrayal of the fantastical, bringing together two young artists for an engagement in the nuances of humanity.

Darvesh – Warrior curated by Irfan Gul Dahri at the Sanat Initiative, September 13 to 22, 2022

Asma Ahmad is a freelance writer. All information and facts provided are the sole responsibility of the writer.