Thirst for knowledge knows no bounds

With no public or private school available, Safarabad's residents look to an informal school to fill the gap

Skardu is surrounded by beauty: nestled between the Himalayas and the Karakorum in the Indus Valley, spotted by blue-water lakes and white sandy deserts, with tall slender trees lining the city’s streets and ancient forts crowning its hills. Tourists from near and far flock to Skardu every summer season and mountaineers from around the world consider the town the base for their climbing adventures. Mesmerised by the splendour of the scenery it is easy to overlook local people and the hardships they have to deal with. The travel guides do not inform us of the poverty, lack of access to education and displacement. Travelling from one tourist attraction to the other we might not see – or fail to notice – out of school children and displaced people struggling to make the ends meet. But Skardu’s true beauty is its people, their resilience and perseverance, their generosity, and the smiles that brighten their faces despite adverse circumstances.

At the edge of the Katpana Desert, a high-altitude cold desert located just next to the city of Skardu, there is the town of Safarabad, so named after its leader – Safar Khan. He and his family, as well as many other families that made their homes here, migrated to Skardu from remote valleys to seek better life, better job opportunities and better education prospects for their children. Skardu is the district capital, a gateway to the eight-thousanders and a tourism hotspot but life is far from easy here. The city is accessible by plane from Islamabad but majority of the visitors come in summer season. Winters are harsh – with the average temperature around -10 degrees celsius and snowfall disrupting the communication by road. The electricity production and supply depend on flowing water, and when the water freezes in winter the locals have to deal with power outages. It is cold and dark here during winter months.

But summers are beautiful. When I visit Safarabad at the beginning of August the gardens in front of the small houses are in full bloom. The corn and potato patches are interspersed by flowers. It is hard to believe that when the current residents came here it was part of the desert. Now the desert is greening up. The migrants dug the wells and filled the water tanks. They sowed the seeds and planted the trees. They constructed houses and mosques and settled in the new place. They slowly rebuild their lives but what bothered them was that their children had no education, as there was no government school available locally, and the private and public schools in the city were unavailable due to distance and financial constraints.

There are out of school children living all over Pakistan and according to UNICEF as much as 44 per cent of children aged 5-16 are missing out on education. And while there are many and often complex reasons why children do not go to school, it boils down to the problem of access. There are simply not enough schools to accommodate all the children, there are no schools available for kids living in remote areas and no schools constructed for migrant communities in the cities. The government officials acknowledge the problem but with limited resources there is just so much they can do. The gap in public services provision is partially filled by a plethora of third sector organisation – big and small NGOs reaching out to neglected communities and opening informal schools where no formal schools are available.

Today, I am here to visit one such school. The teacher, Nusrat Fatima is awaiting me. She shows me in a large classroom situated below the prayer hall of the mosque. The building was constructed by her in-laws – the family of Safar Khan, and the lower ground floor was designated as a space for learning. The classroom is cheerful – there are charts and posters on the walls, the floor is covered with a colourful mat, the kids sit cross-legged on the floor busy with different activities. Some are occupied by their studies, others are absorbed in artwork or preparing decorations for the Independence Day celebration. They look happy, if a bit shy but they respond to my greeting, and when asked, explain what they do. Children from KG and Garde 1 group are practicing their letters writing. Class 2 and 3 are doing some Maths and the eldest in the group – grades 4 and 5 – are preparing posters. Nusrat Fatima assisted by supporting teacher keep their students involved in work and happy. “If I told them that school would be closed tomorrow the children would keep on asking why, and if they could come anyway. They love coming to school!” explains the teacher. And I can see how much students love her and how happy they are here in this one-classroom informal school. 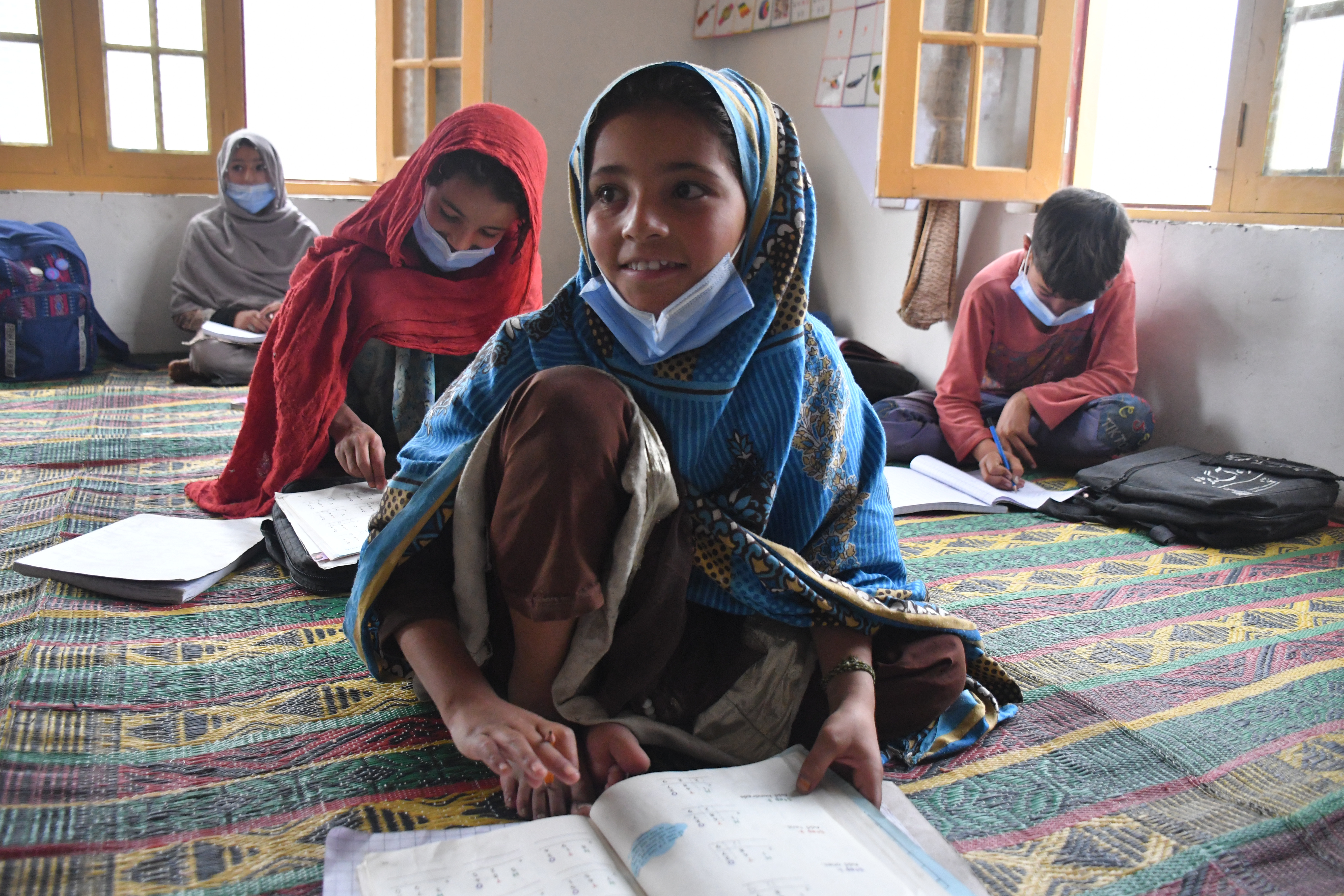 The school was opened with the support of Alight Pakistan – a non-governmental organisation working in collaboration with Central Asia Institute to spread the access to education among the children of the Gilgit Baltistan region of Pakistan. Alight Pakistan trained the teachers and supplied the school with textbooks and other learning materials, as well as a tablet and LCD TV for multimedia sessions. The NGO is also assisting in curriculum development, assessment and the management of the school. The local community – involved from the beginning in establishing the school, donated the space and run enrolment campaign. But local community didn’t need much convincing. Soon, there were more kids wanting to join the school that could fit into the single classroom. And sadly, some had to be turned down. Nusrat Fatima explains that the informal school that she leads became extremely popular with the community. “Parents can see that children do make progress here. Some, who have some children at government school, say that here children learn more and better. But we cannot deliver for all the children who need education. It’s only me and the teaching assistant here and we only have one classroom. We need more schools like this one here.”

Nusrat Fatima is passionate about her work and about the cause of spreading literacy in her community. She knows all her students very well and supports them in best possible way. She can speak two of the most commonly used local languages: Balti and Shina. She is well educated and very dedicated – always ready to walk the extra mile for her students. And some of her students do need that extra support. Like Fouzia – a girl with a beautiful smile that I meet in the Safarabad school. She sits with the older girls helping them prepare the decorations. But she is actually a grade 1 student, and she is 18 years old, even though she doesn’t look her age.

Fouzia’s family has only recently moved to Skardu from Gultari valley – located south of Skardu, near the Line of Control. It’s been a long journey for them – the villages in the Gultari Valley are scattered over huge area, and there is no proper infrastructure so to reach Skardu they had to travel for several hours and across the Deosai Plains. Fouzia will probably be the first one in her family to get education, as her parents and grandparents had no access to any educational institutions back home. There are no schools in Gultari and no hospitals. During cold snowy winters, when the valley is cut off from the rest of the world, the villagers who need emergency help seek the assistance of the army. During summers they work hard in the fields growing barley and looking after their goats, sheep and cattle.

People arriving from Islamabad see Skardu as a remote mountain settlement but for villagers from far-flung valleys Skardu is the centre – the true capital. Fouzia’s family came here to seek better life but they thought it is too late for her to go to school and the girl was reconciled with her faith. But then she met a brilliant teacher and that meeting changed everything. Nusrat Fatima gently convinced Fouzia that she could still join school, and learn how to read and write and count. She convinced her, and her family, that she should try to learn how to write her name, to read the labels and prescriptions, to speak some Urdu to better communicate with other people. Fouzia was hesitant – because of her age, she felt she could not join grade 1 attended by five-year-old kids. They would make fun of her! And they did a bit, at the beginning, but Nusrat Fatima stood firmly by the girl and convinced rest of the class that it is the duty of all of them to support Fouzia and help her learn the basics. Fouzia is happy now and slowly she is gaining confidence in the classroom. She has made friends but still the person that she looks up to in the school is her teacher – her hero.

I am yet to meet another hero – Dawood, who enlisted his family to the cause of educating the displaced community of Kargil war refugees living in the Mujahir Colony at the outskirts of the city of Skardu. He is running an informal school supported by Alight Pakistan in a classroom that is adapted from the living room of his brother house. In the mornings, he works as an Urdu teacher in a private school in Skardu – with a Master degree in Urdu he is a sought-after language specialist. In the afternoons, he and his wife take turns teaching a large group of children whose parents were forced to leave their villages and move to Skardu in the aftermath of the Kargil war. The children in Dawood’s class speak many languages – he knows several, too and does his best to reach out to each child and support them in best way. It is only passion for education and dedication to the cause that drive his work – but he tells me that the best possible reward is to see kids learn and progress, and become more confident and happy.

“Their families still relive the tragedy of the war and of the displacement,” he explains. “But for these children education is the best hope for the future.” Dawood’s daughter is one of the students at the school. While we discuss the challenges that he and his informal school face, she chats with her friends. The kids are happy sitting in this brightly decorated classroom, “It’s to a large degree my wife’s effort. She decorated the school for the kids. We share passion for social work,” explains Dawood.

The teachers are agents of change. Their work makes a difference in lives of many young people but their heroism is unsung. They do not get the appreciation they deserve. When at the end of our meeting Dawood asked me for advice on how to improve his school, I couldn’t give him any. Rather, I felt there was so much I could learn from him.

According to a report from 2016, some 20 per cent of children in Skardu district are out of school. In comparison to the nationwide statistics this figure is not very high but it still means that one out of five children is not getting the education they should, and it is those most disadvantaged – the displaced communities and the villagers from far-flung settlements – who have the most limited access to education. The parents want their children to get educated and there is no shortage of dedicated educators – people like Nusrat Fatima and Dawood but they need support and financial aid to open more schools and reach out to the kids neglected by the government administration. It takes a village to raise a child, as the saying goes. Living in a global village we are all responsible to make sure that each child can get educated and reach their potential.