Saigon redux: A predictable end to the longest war

Nearly two decades after the first shot was fired in Afghanistan, the war has ended in an embarrassing fiasco for the United States with the stunning take over of the country by the Taliban, its former rulers.

In a recently released review of the US mission in Afghanistan, a Congress-created watchdog, has painted a bleak picture of Washington's efforts in the country over the past two decades. While the meltdown was a slow-motion disaster, the scathing report by the Special Inspector General for Afghanistan Reconstruction (SIGAR) highlights innumerable critical faults in Washington’s approach and policy in the country – many of them due to “a wilful disregard for information that may have been available.”

Instead of making any new recommendations, in its final evaluation, the SIGAR poses several questions to US policy makers. Reflecting on Washington’s long engagement in Afghanistan, which historians commonly refer to as the ‘graveyard of empires’, the watchdog blames the US for ignoring the drumbeat of warnings from experts.

Despite telltale signs about the US-backed government’s fragility and its inability to survive, the US government continued to support it – both militarily and monetarily.

Released a day after the Washington-backed Ashraf Ghani administration capitulated, the document which is based on more than a decade of oversight work, 760 interviews with experts such as policymakers and military officers states that there were obvious signs over the past decade – particularly during the drawdown that the government in Kabul would not be able to survive on its on nor will it be able to provide for its own security, which alone cost the US taxpayers a whopping $83 billion.

The sudden yet predictable demise of the government in Kabul comes as no surprise to experts who have been monitoring the situation in Afghanistan. Washington’s failure to install a stable and functional administration in the war-torn nation’s capital, experts believe, has been a slow train wreck coming. 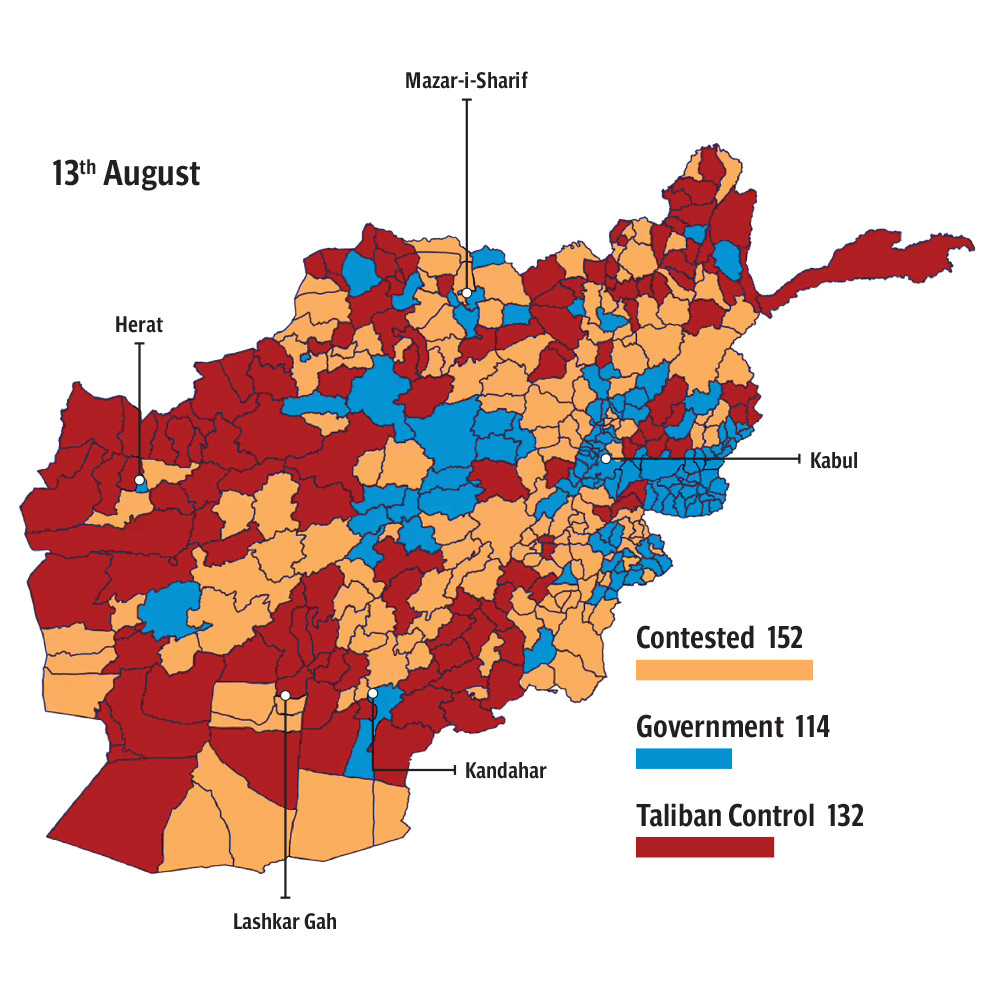 “The Afghan government had no popular legitimacy. The people in Afghanistan saw it not as their representative but as a regime propped by the US,” said Dr. Ashok Swain, a professor of Peace and Conflict Research at Uppsala University. Known for his vocal criticism of several governments in the region, the Sweden-based academic was quick to describe the Afghan government as ‘corrupt and faction-ridden’.

Out of the several key areas of failure in the US response in Afghanistan, the SIGAR also raised serious questions about Washington’s ability to execute its ambitious reconstruction plan – for which the US taxpayers dished out $145 billion.

“If the goal was to rebuild and leave behind a country that can sustain itself and pose little threat to the US national security interests, the overall picture is bleak,” the watchdog wrote in the report, titled “What We Need to Learn: Lessons from Twenty Years of Afghanistan Reconstruction.”

Responding to a question about the US reconstruction efforts and its overall report card after twenty years in Afghanistan, Dr. Swain bluntly said the benefits fall short of the cost “The US government’s nation-building project in Afghanistan failed miserably.”

“It did not take more than two weeks to collapse what the US was boasting to build for 20 years,” Dr. Swain said by email from Uppsala.

When asked to comment on the reconstruction efforts in Afghanistan, Michael Kugelman, who serves as the Deputy Director for the South Asia Program at the Wilson Center said: “The dysfunction and corruption within the Afghan state were too great for US policymakers to resolve–no matter how much money was spent on trying to fix them.”

The Washington-based expert, who has authored several articles on Afghanistan said: “The US was well aware of just how serious and deep-seated Afghan state weaknesses were.”

Washington, Kugelman said, must have known that these weaknesses were too entrenched and complex to be solved simply by throwing money at them and working with people in Afghanistan it thought could be helpful.

Critics in the US, including former president Donald Trump, who at one point was hoping to sign a deal with the Taliban, to ensure the exit from Afghanistan took place on his watch, are blaming President Joe Biden for the embarrassing exit and the chaos that followed. 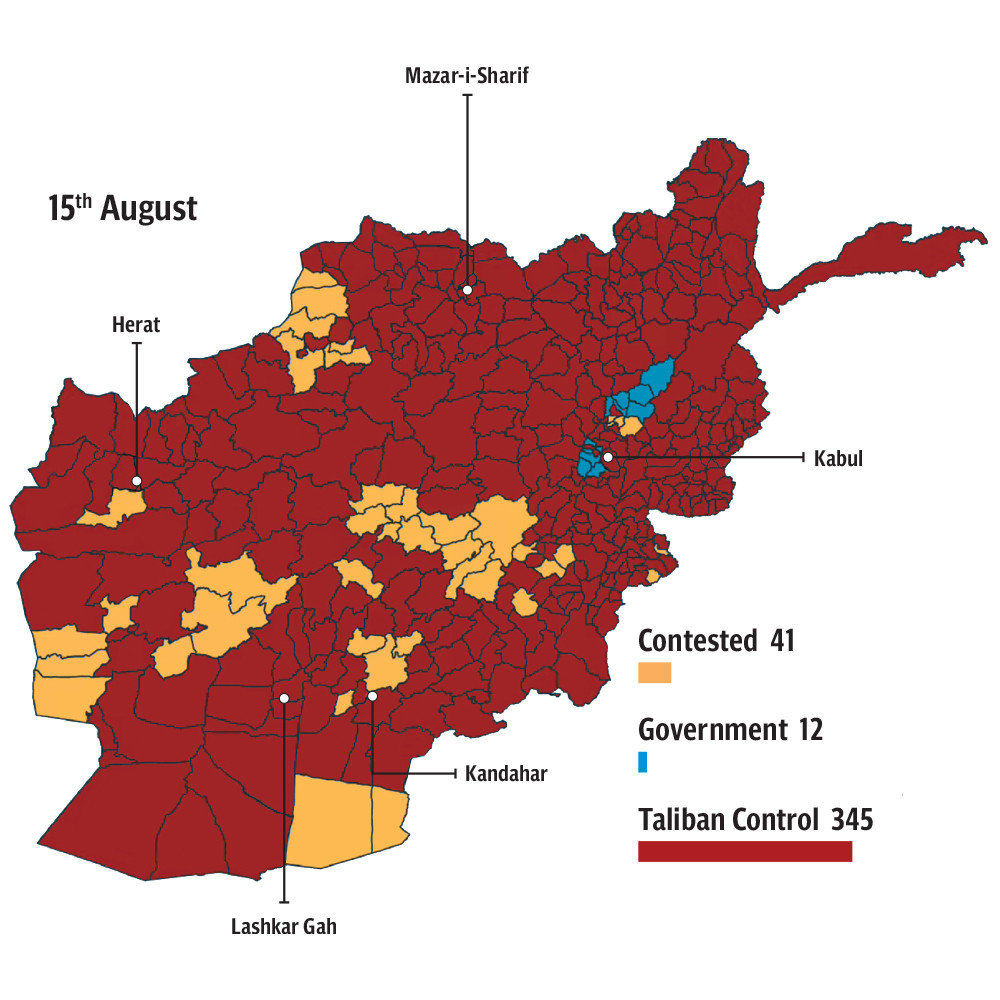 Biden, who is the fourth occupant of the Oval Office since George W Bush, in a policy speech, a day after the horrific scenes began to unfold in Afghanistan, defended the move by saying he ended America’s longest war because he did not want to pass it down to a fifth president.

While Biden may not be responsible for everything that has gone wrong in Afghanistan, the SIGAR report said the US government “continuously struggled to develop and implement a coherent strategy for what it hoped to achieve and it did not have an understanding of the Afghan social, economic and political systems at the local level and therefore failed to tailor its efforts accordingly.”

On Washington’s ability to understand the dynamics in Afghanistan, Dr. Swain said: “The US never understood the country; rather, the US never wanted to understand it.” Shortly after defeating the Taliban, the Sweden-based expert said the policy makers in Washington should have planned an exit from Afghanistan.

“The next best thing the US could have done after defeating the Taliban in 2002 would have left Afghans to run their country, and it should not have engaged in its so-called nation-building project, which was destined to fail,” explained Dr. Swain.

While historians and experts debate the final inscription on the tombstone, the report by SIGAR presents a dim view of Washington’s performance in Afghanistan. The watchdog, in its report, linked the Afghan government’s downfall with the corruption that directly enabled the Taliban resurgence. But apart from the corruption, it said each of the four US presidents who had some role to play in the conflict failed miserably in creating a policy that was fit for Afghanistan. Experts, too, believe that George W. Bush’s nation-building, Barack Obama’s surge, Donald Trump’s deal, and Biden’s end-of-the-month withdrawal plan – all failed. 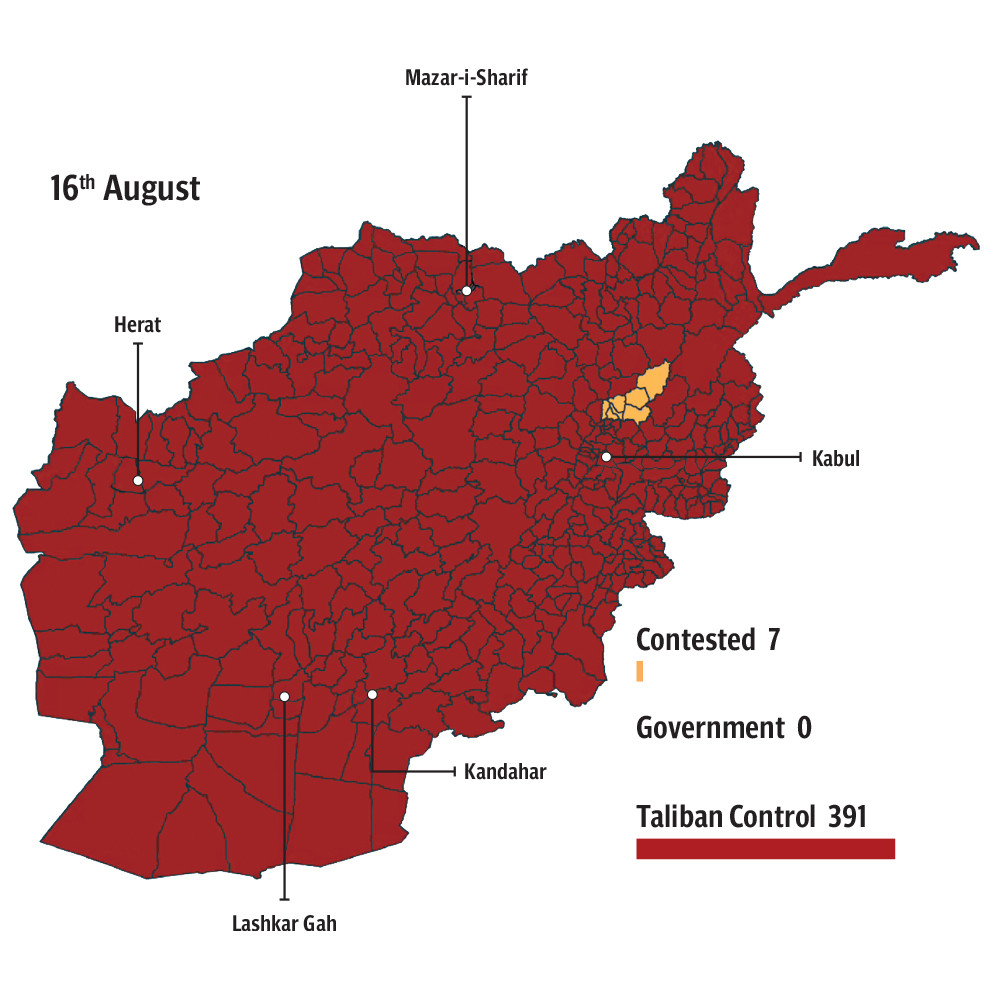 Contradicting the rosy progress reports that frequently surfaced during the past two decades to glorify US efforts, the SIGAR said that any gains that were made during Washington’s lengthy occupation of Afghanistan were not sustainable – and that became reality after its abrupt and unplanned departure on August 15.

In its long charge sheet, the SIGAR which has spent almost two decades examining the progress in Afghanistan, also highlighted unrealistic timelines and expectations that prioritized spending quickly. According to the report, such practices were responsible for a system of government that was weak and plagued by ineffectiveness.

On the defence front, the report criticised Washington for creating and supporting an army that was unable to protect itself without the constant support of the US.

When questioned about the defence spending in Afghanistan, National Security Adviser Jake Sullivan acknowledged that despite investing billions the Afghan army was unable to prevent the Taliban from taking over.

According to Dr. Swain, the collapse of the Afghan forces was inevitable. “The Afghan military had modern arms and ammunition, US air support, and four times more troops than Taliban ragtag fighters. Still, it failed to stop the insurgents from taking the country in less than two weeks,” he said.

“That shows the Afghanistan government and security forces had no plan or willingness to stop Taliban advances. They accepted the defeat and engaged in deal-making for which they are (in)famous for,” quipped Dr. Swain.

The Sweden-based expert is not the only one who hammered the US efforts to train Afghan forces. A day after the collapse of the government in Kabul, the head of SIGAR said: “The speed with which the Taliban overtook might be a bit surprising. But the fact that Afghan Security Forces could not defend themselves should not surprise anyone.”

During the interview with the National Public Radio on August 16, John Sopko, who heads the Congress created watchdog that has maintained an independent oversight on the billions of dollars Washington appropriated for Afghanistan's reconstruction since 2002 was extremely critical of the US approach in Afghanistan.

All said and done, the US efforts in Afghanistan will always be defined by the chaos of the moment. Images of Taliban fighters posing before abandoned US military equipment have not only allowed the group to further humiliate the former Afghan and American governments, but also expose the weaknesses in the system that was created to keep them out of power.

Wilson Centre’s Kugelman was of the opinion that Washington had many talented and knowledgeable officials managing policy on Afghanistan since 2001. “However, it's clear that there wasn't enough of an understanding of what could realistically be done, and what could not.”

US policy gurus, the Washington-based expert said, frequently seek the advice and inputs of outside scholars and analysts. “But one can argue that had such expert views been sought more frequently, things wouldn't have turned out as bad,” he explained.

“And of course, this includes above all seeking the inputs of Afghans–and not just those in government or in the political class,” Kugelman added.

All in all, the situation in Afghanistan, experts believe, would not have been so humiliating for Washington, if the warnings from the troubled country had not been ignored during the past 20 years. 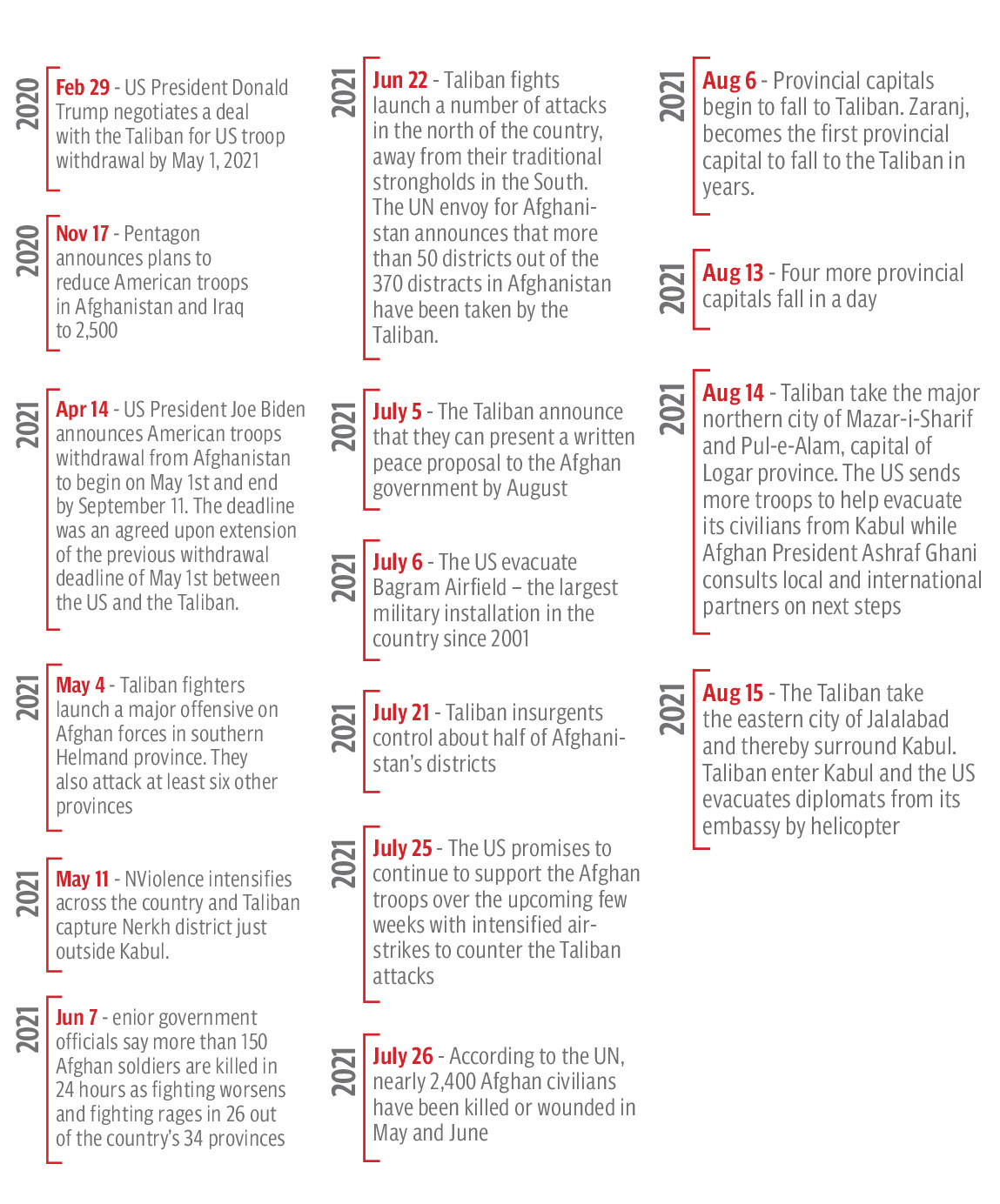