Carved over a hard cliff, the ‘Yatchini’ of the Kargah Buddha has a lot to say about man-devouring evil. At first glance, the carving seems like a naked female figure. However, upon a closer look, the Yatchini has broad and squarish face with distended ears, a flat nose and a broad mouth. With his right hand raised, he stares back at you in a fearless pose.

A series of holes create a boundary around the Yatchini. These pinholes are believed to be holding ogress in place. The 13 holes are fixed on all four sides of the ogress. Later the saint declared that she would not bother them as long as the saint was alive and if they buried the saint at the foothills of the rock, she would never be freed. The saint was said to have been buried right below the Buddha statue.

According to local tradition, Yatchini means a female demon or djinn for evil spirits.

Kargha Buddha is a famous heritage site situated a few kilometers from Gilgit city. The rock carving beside the Kargah Nala just west of Gilgit along the road to Punial is the most popular short outing resort from the Gilgit city. Kargha Buddha was carved in the 7th century. The local legend about the Buddha tells of a man-devouring ogress, called Yatshini who lived at Kargha.

Every year thousands of Buddhists from Korea, Japan and other countries visit the Buddhist site for a viewing of the statue of Yatchini.

According to famous Japanese scholar Dr Haruko Tsuchiya, “This is a chambs style figure. The only other figure of the same style is found in Mulbelandakh. The sort of figure is known as Buddhaisatta vs Maitreya, which has nothing to do with Gandhara Art.”

A former British political agent DLR Lorimer stationed at Gilgit from 1920AD to 1924AD also collected and published this Yachani tale in his book, Gilgit, Chitral and Yasin.

As written on the board fixed at the entrance of the Kargah Buddha site. Once upon a time, there was a devil woman called the Yatchani. If two men went off from Gilgit to fetch wood, they say, she used to eat one and let one to go. If two men went off, she would eat two and leave two to go. In this manner, she gradually ate and finished off all the people living on the countryside.

To dig out a solution of the man-hunting devil, the people took counsel among themselves, saying “How can we kill her, or how shall we bind her?” One among them, someone said, “In Bagrot, there is a Daiyal Khimito. He will bind her.”

When they had the DAIYAL fetched from Bagrot, he said to them.

“Oh you folk this is nothing to worry about, I will bind her for you, and I give you this advice: After she has been bound, wherever I may go and die bring my body thence and prepare a grave below the Yatchani and bury me there, then she won’t come to life again.”

The people accepted his advice and then, Daiyal Khimito drove iron pegs into the face of the cliff, climbed up and arrived at the door of the Yatchani’s dwelling. Upon hearing him, she came out of her house and to the door. “Oh Yatchani,” said Khimito. “Alas your brother has died in Kashmir. When he said this Yatchani pressed her open hand on her breast and Khimito drove an iron peg into it. Once a jain, he said, “Alas your father has died in Paltistan.”

Yachani pressed her thigh with her other hand and Kimito drove a peg into her thigh and let it in. The Yachani now was fixed to the spot. She said to Kimito, “What am I to eat?”

“Eat gravel off the earth cliff above the Basin,” he said. 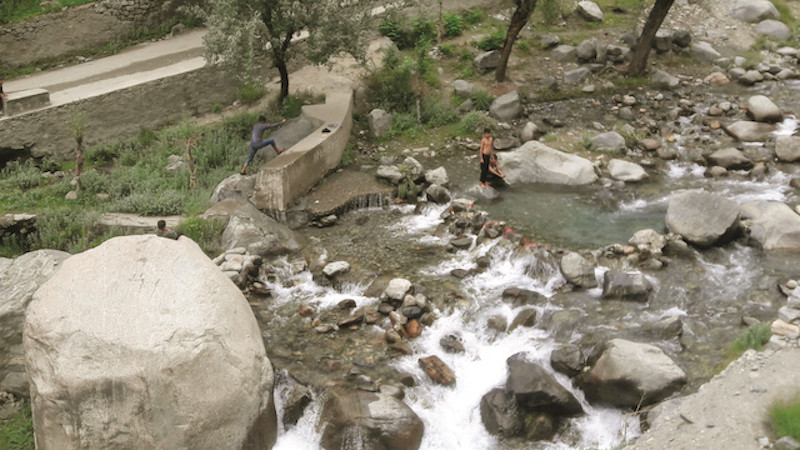 The heritage site has great potential to attract a large number of national and foreign tourists if the government invests money in the infrastructure building as the road leading to the site needs repair and security to be deployed to safeguard it, said Raja Zaheer Wali, contractor of the Kargah Buddha site.

According to Wali, in the year 2018 and 2019, more than half a million tourists visited Gilgit to see the Buddha.

There are many archeological sites in Gilgit Baltistan, which should have preserved and protected much earlier however, this has not been done so far. “It’s the government responsibility to protect and develop these heritage sites to promote heritage tourism,” Wali added.

In September 2018, a group of Buddhists Monic from Korea visited this site. They performed their worship in their complete religious dress as they dressed up themselves properly to perform their religious obligations, he recalled. “I had heard that they had signed an agreement with the Gilgit-Baltistan government and according to it, they will visit the site for worship every year,” he said. However, he was unaware about any further update in this regard.

The followers of Buddhsim from different countries around the world, including China, visit the site, he added. “We also offer tracking facilities to visitors in the nearby mountains,” said Wali. Besides, we also facilitate tourists who want to visit the heritage sites located in different parts of the city.

Talking about national tourists’ response, he said a large number of tourists from different cities of Pakistan, including Karachi and Lahore, visit the heritage site.

The entry fee for local visitor is Rs50 for elders and Rs20 for children. Nationals have to pay Rs100 while foreign tourists pay Rs500 to visit the site.

“There are many locals who don’t pay even this minor entry fee but still we allow them to visit inside and learn about the history of the Buddha,” said Wajid Ali. “Although local residents are cooperative and they never attempted to incite violence here, the site is vulnerable due to many pushes and pulls.”

Talking about security measures, Wajid Ali said there is no security guard deployed by the government to protect them from potential damage to the structure. Ali said that he has made various attempts to draw the concerned authority’s attention in this regard but so far to no avail.

“We face many problems due to lack of government attention towards the protection and promotion of religious and heritage tourism in the city,” he added.

The tourism department never paid attention to this heritage site despite the fact that it is a great resort to promote religious tourism and generate revenue to strengthen the Gilgit Baltistan economy as well as to create job opportunities.

A Tourist Resort of Int’l Fame

Senior journalist Shakila Jalil while visiting the site said, “The Kargah Buddha needs the attention of the tourism and archaeological departments of Gilgit-Baltistan for preservation and safeguarding.”

The heritage sites, particularly Kargah Buddha have great potential to attract foreign tourists and generate revenue for the national economy. Jalil further said that the road leading to Buddha site from Gilgit city is in poor condition and needs immediate attention so that the historic site can be accessible for tourists easily.

It is an amazing place to visit with family and friends as you can not learn more about the history behind the Kargah Buddha but you can also enjoy the icy cold water flowing down at the site as well as the chilling wind, said Anam Asghar, a resident of Rawalpindi. “I have visited the site twice before and yet I am here once again, enjoying the pleasant environment of this historic place,” she said.

“A little attention from the government can make this heritage site into an international standard tourist resort,” she added.

“I often visit the site as it is located at the walking distance from my home,” said young Ismail. We [friends] come here to listen to the tale of Kargah Buddha.

“On our way back, we also take a bath in the nearby stream, '' said Majid, another local boy. “Though, the stream water is too cold to take a bath but we still enjoy jumping in the deep water from rock and then swimming under the heat of sun.”

The heritage resort has a traditional boundary wall, a stream grinder machine, some huts and a stand to view the Buddha status easily with close eyes.

The apex court also directed establishment of a separate police force comprising trained and qualified security officials from religious minorities to ensure protection of places of worship and visitors.