A tale of two tournaments

This year witnessed two of football’s most prestigious tournaments, the Euros and the Copa America, held side by side

Two of football’s most prestigious tournaments after the World Cup, the Euros and the Copa America recently concluded with some predictable outcomes and some unexpected occurrences.

England failed to bring their first silverware home in nearly 60 years as Italy flew away to Rome with the Euro 2020 trophy after a penalty shootout heartbreak for the hosts of the final. With a packed stadium watching, England scored, then conceded and then saw the Italian goalkeeper make two stops and see one hit the crossbar as they lost yet another big match on penalties.

Meanwhile, in Copa America, history was made as Barcelona star Lionel Messi won his first-ever major international trophy with Argentina. Brazil were beaten 1-0 by Argentina in the final at the Maracana stadium in Rio de Janeiro, all thanks to a goal from Angel de Maria.

The two tournaments had their ups and downs, their high and low moments, but one thing is for sure that the Qatar 2022 World Cup organisers would have kept a keen eye on the event and taken important notes to prepare for the global event.

The stars that shined 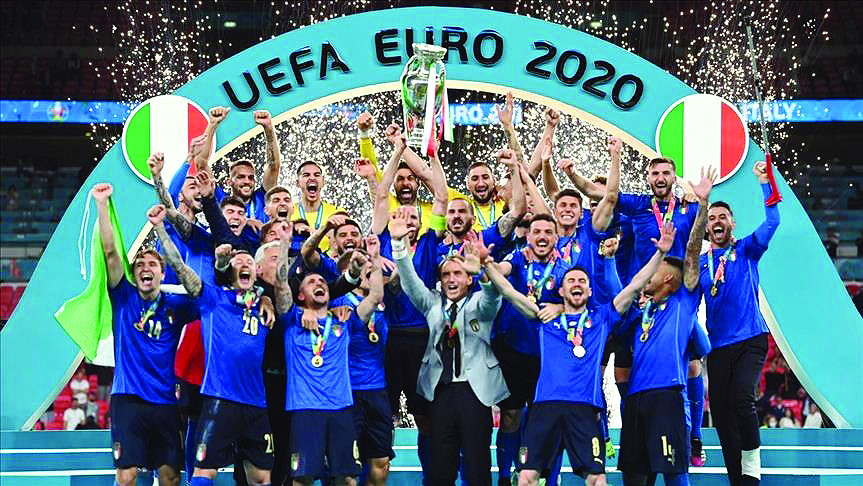 Euro 2020 had some epic moments with both youngsters as well as experienced players making a mark on the tournament.

First and foremost, no one can talk about Euro 2020 and not start with 22-year-old Italian goalkeeper Gigi Donnarumma. The shot-stopper, who has now joined French giants PSG, was instrumental behind the Italian defence. His two saves in the final against England helped him earn the player of the tournament award at Euro 2020, after inspirational performances throughout the tournament.

Next on the list should be the player of the final, Italian centre-back Leonardo Bonucci. The defender has received criticism for playing more as a mid-fielder for his club, but when it came to Euro 2020, Bonucci was inch-perfect in defensive execution together with his back-line mate Giorgio Chiellini. The 34-year-old Bonucci also proved in the final that age is just a number and class is ageless as he first scored the equaliser and then successfully converted the spot-kick in the all-important penalty shootout.

Another Italian, Federico Chiesa, may have spent half of his time at Euro 2020 on the bench, but whenever he came on the pitch, his attacking runs caused problems for the opponents. In the final against England, Chiesa was one of the reasons that England had to push all their 11 players back into their own box, which eventually resulted in the equaliser scored by Bonucci. The 24-year-old will surely be a transfer target for many when the European leagues kick-off.

Other players who made their presence felt at Euro 2020 include England defender Harry Maguire and attacking winger Raheem Sterling. While one made sure that England didn’t leak away any goal throughout the tournament, the other was instrumental in creating and scoring important goals for England.

And if Donnarumma’s confidence and skill in the goal was matched by any other goalie, it was England’s Jordan Pickford and Denmark’s Kasper Schmeichel.

At the Copa America, one usual suspect was the top-scorer and provided most assists – Argentina’s Lionel Messi. The left-footed maestro was unstoppable throughout the tournament, slightly outshining former Barcelona teammate Neymar.

While Messi did what Messi does, during Argentina’s semi-final against Colombia, the Copa America winners’ goalkeeper Emiliano Martinez stole the limelight from the striker. Martinez was the star in the goal as he helped Argentina beat Colombia 3-2 on penalties in the semis. The Arsenal goalie, with his Copa America performance, has proven that Argentina are one of the favourites to go on and win the World Cup in 2022.

Neymar was also a force to be reckoned with at the Copa America and proved that he has matured into a playmaker apart from being a goal-scorer for Brazil.

Some players who were nobodies before the Copa and will now be on the scouts’ radars are Ecuador left-back Pervis Estupinan and his compatriot centre-back Piero Hincapie. Colombian forward Luis Diaz was also the standout performer at the Copa, which helped him make it to Copa America’s team of the tournament.

Racism has to be one of the most discussed topics in the past few years, with the Black Lives Matter movement bringing the topic at the centre stage of the global conversation and footballers never received any exception from racist slangs.

England’s three players who missed the penalties against Italy in the final were all non-white individuals and were subjected to merciless racism on social media after the match.

Former footballers had to jump in to douse the hate being spewed against Marcus Rashford, Jadon Sancho and Bukayo Saka, but the damage was already done to footballers and also to the game.

The Premier League, which operates from England, and the English Football Association has been running year-long campaigns to promote anti-racist behaviour from fans and others, but the racists found their opportunity once again after Euro 2020.

Meanwhile, racism wasn’t the only vice which was practiced at Euro 2020.

When Hungary hosted Portugal first and later France for the group matches, their fans brought homophobic banners to the stadium. They later also demanded players to stop taking the knee in support of the Black Lives Matter movement through banners. UEFA had to sanction the Hungarian football association at the end of it to make a statement against discriminatory and racist behaviour, but even that didn’t deter English fans at Wembley during the finals from booing during Italy’s national anthem. The absence of sportsmanship shown by England fans even before the final started was only outdone by the hooliganism after the match.

Hordes of fans broke through the blockades set up by the police and stadium management to enter Wembley. Meanwhile, the streets in London were also showing glimpses of the dark ages as football fans’ enthusiasm turned into vulgar protests after the match as defeat became difficult to digest for some.

All in all, Euro 2020 painted a clear picture of the dark side of football fans, not only in England, but everywhere else. 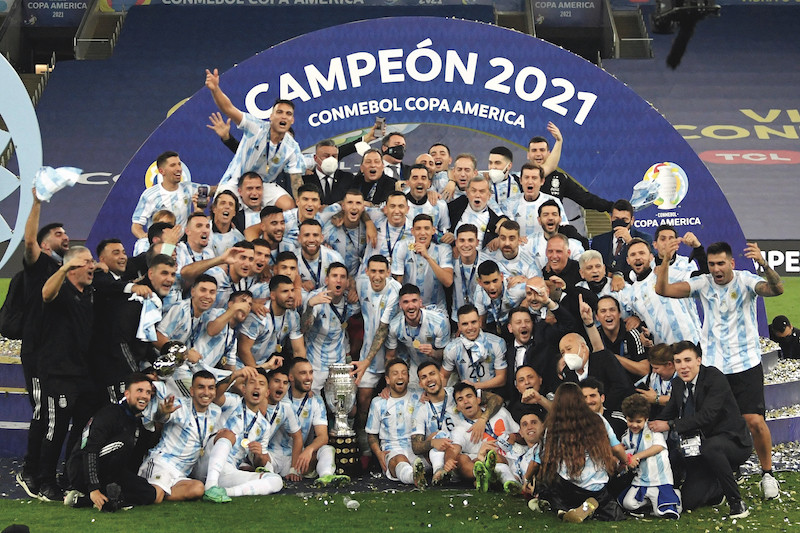 Meanwhile, Copa America had its own demons to slay. Even before it started, controversy marred the tournament as the hosting rights were given nearly two weeks before to defending champions Brazil. Colombia and Argentina were selected to co-host the Copa America, but Colombia pulled out citing unrest, while CONMEBOL dropped Argentina due to rising Covid-19 cases in the country. But the decision to give Brazil the hosting of the Copa America, where Covid-19 numbers were even more drastic than Argentina, brought a lot of criticism for the organisers.

And if that wasn’t enough, the Brazil Supreme Court was asked by players to rule against hosting the Copa America, owing to the increasing number of Covid-19. The Court didn’t rule in favour of the move and hence Brazil prepared to host the Copa America with only two weeks left to prepare, which brought another problem to the fore.

Brazil coach Tite, just moments after losing the final to Argentina all thanks to Angel di Maria’s lone goal, criticised the pitches used throughout the tournament. Tite said CONMEBOL and specifically their president was responsible for giving Brazil the hosting at the last minute, which led to sub-standard pitches. Tite was worried about the players’ safety throughout the tournament, and despite the Maracana being prepared well for the final, other stadiums were a risk to the players well-being.

Qatar is already under-fire for exploiting and abusing migrant labourers, who makes up 90 per cent of the work force responsible for the construction and upgrade of the football stadiums, and if Euro and Copa are any evidence, the hosts will have many other problems to deal with too.

Amnesty International has dubbed the 2022 event the ‘Qatar World Cup of Shame’ in a published report consisting of real-life accounts of workers as they unveil the inhumane working conditions.

According to the report, nearly 1.7 million migrant workers are currently in Qatar and nearly 3,200 individuals work on the Khalifa Stadium alone. With such a big workforce at their disposal, Qatar had to sign an agreement with the International Labour Organization in 2017, promising to tackle widespread labour exploitation and ‘align its laws and practices with international labour standards’. However, many still believe nothing is being done in that regard.

While Qatar will be busy fighting human rights activists as they raise their voices against the 2022 World Cup hosts, they will have to also fight Covid-19 and the havoc it will cause when fans plan their travels to the Middle East to support their respective national teams.

One lesson that Euro and Copa would have provided to the Qatar 2022 organisers is that they will have to enforce strict measures to control the fans, but only if spectators are allowed to travel to Qatar to watch the World Cup. Covid restriction on one side, disciplinary restrictions will also be needed in Qatar to stop the fans from colliding inside and outside stadiums.

Another problem for the Qatar 2022 organisers would be to create a bio-secure bubble for all participating teams and their players. This is the first time in the history of the game that a football World Cup will be held in the Middle East. While Qatar may boast immaculate preparations, it doesn’t have the experience of hosting such a big sports extravaganza, and more so with Covid-19 still at large.

The event will do one of the two things for Qatar: announce them as one of the emerging sports hosts for the next few decades, or kill their dream to ever host anything as big as a World Cup ever again. Qatar would be hoping it is the second option, but if Euro and Copa are any evidence, it is wise to expect unruly behaviour from fans. Meanwhile, they should also be ready to stage the World Cup in front of empty stadiums as the Tokyo Olympics are now going to be because of the uncertain environment created by Covid-19.

In conclusion, racism, booing anthems, controversial switching of hosts and dangerous pitches may have taken some fun out of both Euro and Copa, but the football-tainment was still exemplary in the two events. Last-gasp winners, breathtakingly close penalty shootouts and most importantly great players doing great feats with the ball was delivered as promised, even with the virus ravaging the globe.

Also, the two events provided teams with the opportunity to measure their oppositions when the 2022 World Cup starts. With finalists of the two events – England and Italy at Euro, and Argentina and Brazil at the Copa – showing off their game, the World Cup promises to be yet another football fiesta. However, teams like defending champions France, former champions Germany and other dark horses such as Denmark and Croatia can’t be counted out to win the World Cup.