In a world made of cardboard

There is an episode of the Justice League Unlimited animated series where the characteristically reserved Superman ‘cuts loose,’ for once. “I feel like I live in a world made of cardboard,” he tells the tyrannical cosmic super-villain Darkseid, “always taking constant care not to break something, to break someone. Never allowing myself to lose control even for a moment, or someone could die.”

“But you can take it, can't you, big man,” he adds. “What we have here is a rare opportunity for me to cut loose and show you just how powerful I really am."

Avid readers of comics are well aware and somewhat annoyed at a tendency on the part of writers that has come to be known as ‘power creep.’ Perhaps ‘geekdom’ is itself to blame, what with the schoolground debates we have had on which character is stronger or more adept. Can Batman defeat Superman given enough time or is Superman simply too powerful? What about DC versus Marvel? Whose characters are stronger?

Absurd questions really, it does not take more than a little thinking to figure out it is all in the hands of the writer. Fictional characters are simply as smart or strong as a storyteller wants them to be. In the case of Superman, for instance, the character could not even fly in his original incarnation. He simply leapt over tall buildings.

Which can tell you a lot about the sensibilities of the time, in fact. We live in a world where tall buildings are marvels of engineering no more. For us, even in the third world with all the media we consume from the first, tall buildings are sort of what signify a sprawling mega city. But imagine living in the early half of the previous century. A skyscraper suddenly means a whole lot more than what our modern deconstructive obsession would reduce it to.

Speaking of sensibilities, how we view superheroes, to a lesser extent, also reveals much about modern ones. There is an interesting parallel here with attitudes towards religion. Both have been ‘reduced’ to something or the other – among believers and non-believers, fans and skeptics alike – and subverted ad nauseum by those who would like to scoff at them. 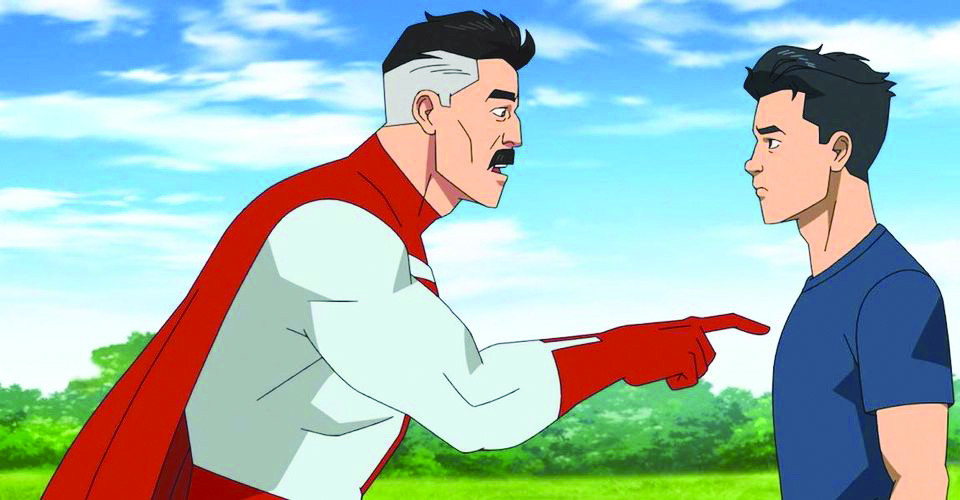 There was a time when the anti-hero seemed like a novel concept. Maybe it wasn’t in reality; I was probably 5 or 6 at the time. The same goes for subverting the superhero. Superman occupies a strange space in this regard. I would be willing to bet that in most people’s minds, he is a ‘beloved’ character – by others. But no one these days actually likes him, thinking him ‘boring’ and ‘too powerful’.

‘Too powerful’, for us, triggers questions about morality and motivation. We live in times of mass cynicism, through no fault of our own. We live in times of unprecedented power concentrated in the hands of a select few and how we have seen them and continue to see them wield it leaves a lot to be desired. How can then heightened sense of right and wrong coexist with absolute power for us? There must be more than meets the eye. If not than Superman is just ‘boring’.

This brings us to the series I intended to discuss: Amazon’s Invincible, the last episode of which was released on the online streaming service just towards the end of last month. The series and the comic book it is adapted from run much in the same vein as another one, namely The Boys, which incidentally is also an Amazon original. The original comic book in both cases was first published in the same decade, the 2000s, although Invincible, while late to the small screen, predates The Boys in print by more than three years.

There is, of course, much different in the way both stories unfold, but a key element that the two series share is in their handling of superheroes. On the surface, at least, both attempt to approach the genre with a ‘modern grittiness’, presenting the very idea of heroes as necessarily and inevitably flawed. Some would even go so far as to mistake it for ‘realism’, although the very notion of realism and superheroes is absurd.

The Justice League/Avengers stand-ins in The Boys, particularly the Superman doppelganger who leads them, are presented narcissistic hedonistic sociopaths with no fear of accountability on account of their powers. Invincible, in contrast, still retains some sense of nobility in its flawed heroes, for the most part. Save for ***SPOILER ALERT*** its own central version of Superman.

Omni-Man in Invincible – the father of the titular character – is a more overt Superman clone, in contrast to Homelander from The Boys. While being an alien is simply a cover story for the latter, for instance, Omni-Man is supposed to be an actual visitor from the far reaches of space.

The initial story arc also sets him up more identifiably as a Superman parallel for the impending twist. As the story unfolds, we find that his upright character is part of an insidious ploy to gain people’s trust and lull Earth into a fall sense of security for a planned takeover by an intergalactic empire.

In either case, a major similarity in themes is the idea of whether morality can exist with a power that guarantees absolute impunity. The Boys takes a more concrete position on one side while Invincible will – going by the comic – explore both sides as it goes forward.

The question of mortality is another important theme subverted in both series and explored a bit more in Invincible. There was a running joke among avid readers of Marvel and DC that nobody stays dead in comics, save for Uncle Ben, Gwen Stacy, Bucky and Jason Todd. To drive home the irony, the latter two would go on to be resurrected in the current century. The two comic book pantheons do have a serious problem, in any case, when it comes to dealing with the consequences of superheroing and that hasn’t been amiss on a modern generation of writers and readers who’ve seen the genre reach mass consciousness.

Mortality is very much a thing in both series. In Invincible, it is explored by means of contrast. The initial story arc sees Omni-Man murder the Guardians of the Globe, this world’s Justice League/Avengers. The deed is carried out with the utmost gruesomeness and mortality, evoking Superman and his world of cardboard. Omni-Man himself, and the race of Viltrumites he belongs to are shown in contrast to be all-powerful and nigh indestructible. Omni-Man, coming clean to his son, also reveals that they live millennia before showing the slightest signs of aging.

An interesting conversation takes place, when Invincible asks his father about his love for him and his mother. “She is like a pet,” he replies. I find the line interesting, given how what mortality would seem to someone near if not completely immortal. We live with creatures with naturally shorter lifespans all around us. Some even accept them as members of the family. Perhaps the disparity in our levels of sentience has a key role. But we would never know lest one is immortal surrounded by mere mortals. It may have been intentional or unintentional, but there is something very ‘ancient Greek’ evoked by this exchange. Greek mythology, after all, is full of tales of gods that toy with the affairs of mere mortals. Troy is sacked in a sequence of events that begins with three goddesses arguing over their beauty. There is a possibility we cause wars among the animal kingdom all the time and never know about it. Our sense of morality exists in parallel with obliviousness.

Coming back to the topic of subversion, and one can accuse me of an unfounded nostalgia, but there is to me an alternate way to view both religion, and by extension superheroes. There are some who argue taking any story, whether you believe it to be true or not, at face value misses the point. Religion and its narrative underpinnings, in many ways, provide moral shorthand for navigating day-to-day dilemmas. We can argue what is dated or not, but the historiography of events may be irrelevant. In modern times, inadvertently, I feel fictional heroes did the same. Perhaps it is time to subvert the subversion and see if a return to old narrative tradition can lead to more positive ethos.