The transgender community struggles to earn a dignified living

By YUSRA SALIM |
Since the opening of the shop at the end of March 2021, coincided with a rise in Covid-19 cases in the region, it once again led to more challenges for the shop. PHOTO: NISHA RAO
KARACHI:

Deep in the middle of the third wave of coronavirus, as people all across the country are suffer financial losses due to lockdowns and curfews, a marginalised community - whose struggles are only deepened by the pandemic.

Advocate Nisha Rao began a tailoring shop for transgenders in Saddar area in March however, her shop has temporarily shut down due to an adverse response from the market and customers. The shop has been rented out by Jinnah Complex apartments to Rao’s group named Trans Pride Society but the markets and unions have not been very receptive to the initiative. “At first, soon as they found out we were transgender, they refused to rent out a shop to us,” Rao shared. “We struggled quite a bit as many people were not open to the idea of transgenders running a tailoring shop however, when everything was finalised, we finally opened our shop but now lockdown and the overall Covid-19 situation has made it difficult for us to operate.”

Rao who by profession is an advocate and works for trans rights came to Karachi 12 years ago from Lahore in search of her identity but since she didn’t know anyone in the city, just like most other transgenders in the city, she ended up begging on the roads. However, her passion and determination to change and better her life led her to completing her Masters in International Relations and then her LLB from Sindh Muslim Government Law college. “I saved money from begging and completed my education so that I wouldn’t have to earn from dancing and begging like most of the people from my community do,” she said. Rao completed her law degree in 2018 and since then she has been working to help better the lives of other struggling members of the transgender community too.

Since the opening of her shop at the end of March 2021, coincided with a rise in Covid-19 cases in the region, it once again led to her facing more challenges for her shop, especially as it was a new business and had yet to make an impact. “As soon as the workers started working in the shop the timing and days of markets were changed and we were barely able to get any customers, which was very disappointment for them as they had all left begging and dancing behind them to come and earn money from stitching but when they realised there isn’t any work in the shop, they started leaving one by one,” Rao explained.

After almost all the transgenders began leaving the shop and started begging again, Rimmel who was heading the shop, which involved taking orders and managing the shop, was left alone to run the entire shop by herself and thus it fell on Rao, to close the shop temporarily till Eid.

“Mostly people from our friend’s circle used to give us orders for stitching whereas we hardly received two to three orders from other customers,” said Rimmel, sharing how people were reluctant in coming to their shop and taking their services. “The shop was not exclusively run by transgenders. We also gave space to a woman and her husband work her as well so that if anyone was not comfortable with transgenders taking their orders or measurements, those customers could be tackled by the other two tailors but even that didn’t help much.”

The other main issue behind the closure is that Rimmel and the rest of the transgender were continously facing harassment from young men over the phone as well as in person. “Our number which was available on our page for online orders was constantly being used by young boys who would call us and say uncomfortable things and harass us,” said Rao. At the shop, every now and then spectators would stop outside and just stare at them.

What does the future hold?

The tailoring shop has been closed temporarily but Rao plans to give the shop another chance once the lockdown has eased. “After Eid we will either re-open the shop at the same place and shop or else, we will shift the machines and workers to our community centre so that the problem of catcalling and harassing can be controlled,” she said. “Working in the market would’ve given them exposure and they would have learned more but the safety of my employees is important so we may shift to the community centre. However, we are also considering another location that may be better in terms of location and attracting customers, so that may be an option too”

The shop is funded and supported by independent resources and despite the shop rent, machine expenses and utility bills and even the salaries of the workers, money was not a problem. “We are supported by an independent donor who showed interest in our idea and initiative, and has agreed to support the business for a year until it its stable and the shop can start earning profit and can manage its own expenses,” said Rao. She also that the charges for simple stitching were minimal with Rs 800 for a simple shalwar kameez and some additional charges if further detail and design.

The problem lies within 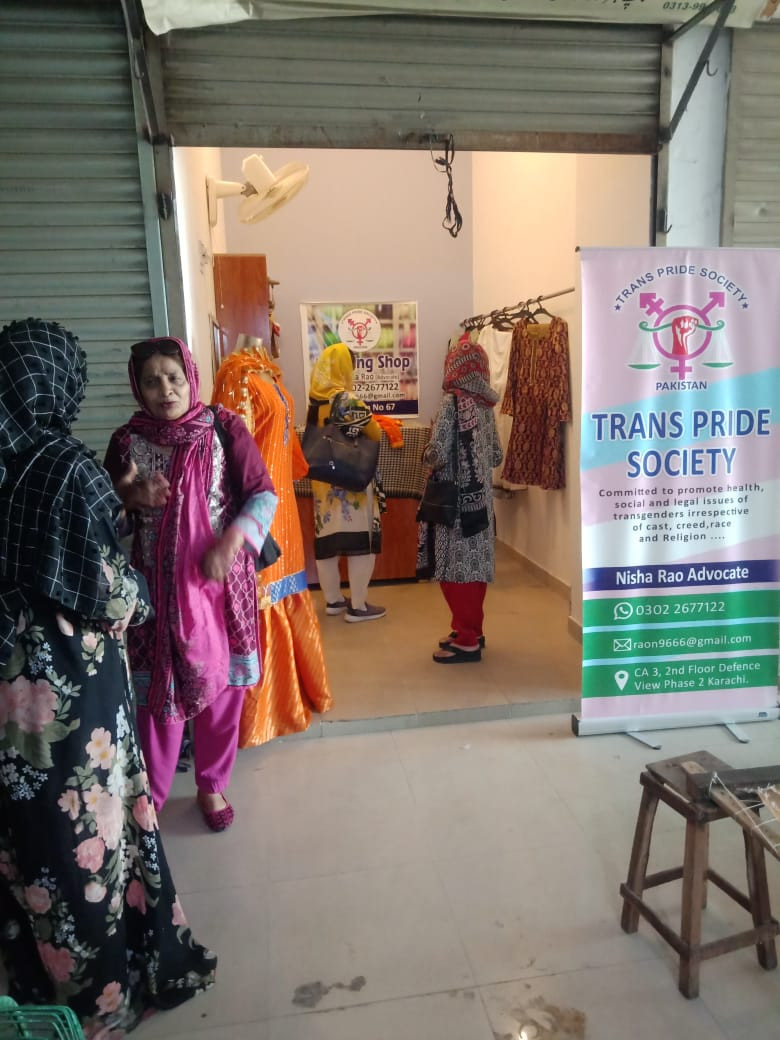 Between all the issues such as harassment, shortened work hours and lack of acceptance from people, what remains constant is the lack of will of transgenders themselves to work and earn a dignified living. “Most of them went back to begging and dancing because that’s easy money and they don’t have to work hard for it or struggle to earn in a respectable manner,” said Rimmel. “Begging and dancing doesn’t bind them anywhere and it allows them to enjoy while sitting at a shop and working there means they have to endure harassment and staring just to prove themselves.”

The two shops of well-equipped machines, storage racks, and a small seating place with 10 tailors is now was left with just her. “In the beginning the media highlighted our effort however all that did was stir curiosity in people to come and see what we were doing but that didn’t lead to us getting any work,” she said.

Every business needs time and effort, says Bindiya Rana, who reminisces that her father told her when she was young that nothing can just start with a boom and each business incurs a loss before it eventually picks up pace. The Pakistani transgender activist and founder of Gender Interactive Alliance (GIA), Rana was of the view that such initiatives take a while before they can do well as people need time to accept them. “It has hardly been two months; this work needs patience and determination given the situation of Covid-19 and especially since transgenders have to fight an extra mile for them to be recognised.”

Rana who has been advocating for the rights of transgenders on every platform has more than 18,000 transgenders registered in GIA from a total of 20,000 residing in Karachi. With this huge number of transgenders working under her, she thinks that besides begging and dancing, they appreciate everyone in their community to learn at least one skill of their own to support themselves in the future so that they can earn with respect and dignity. Sharing about the issues they face, she said that whenever any transgender is hired the news reached the media and after few months either they are asked to leave or the circumstances become so hostile and they feel compelled to leave the job. “All they have to do is earn enough to feed themselves as most of them don’t have families supports or help. They just need enough money to make ends meet, which is even difficult for a common man so then how do you expect it to be easy for us,” she said.

To build a better structure and system for transgenders, they need training and help which can only be possible with the help of provincial and federal government along with the civil society. “Just a few days ago, I read in the news that transgenders will be taught marketing skills however, the opportunity is only available to those who are educated. This is not practical as from thousands of us, hardly 100 are educated so these trainings can hardly make a real impact. What about others who really want to learn and live a better life?” she said.

Suggesting and sharing what she and her community centre has planned, Rana said that the government should initiate a training programme to teach stitching, make up, driving and any such skills which do not require degrees so that they can contribute to the economy and not squander their potential. “We will be starting a training process for 40 transgenders on our own after Eid for which we have already registered 22 people for make-up, driving and tailoring courses,” she said adding that after the six months training, they will be providing them with sewing machine equipment’s worth Rs 35,000 and another Rs 50,000 to Rs 100,000 to start their small set up. Other than stitching the ones who will learn to drive can buy a bike or become a driver and even use it in any ride hailing service. For the transgenders who are older and do not have anyone to earn for them, Rana plans to help them acquire road side stalls with the permission of the Commissioner Karachi so they can earn their living by selling any edible items. For this training project an International Muslim not for profit has been supporting GIA however, training 40 members from a community of 20,000 is clearly not enough and more trainings are required to cope up with this issue, which is not possible without the support of the government and civil society.