Slum evictions: ‘I was born here. How am I not a local?’

Slum evictions: ‘I was born here. How am I not a local?’ 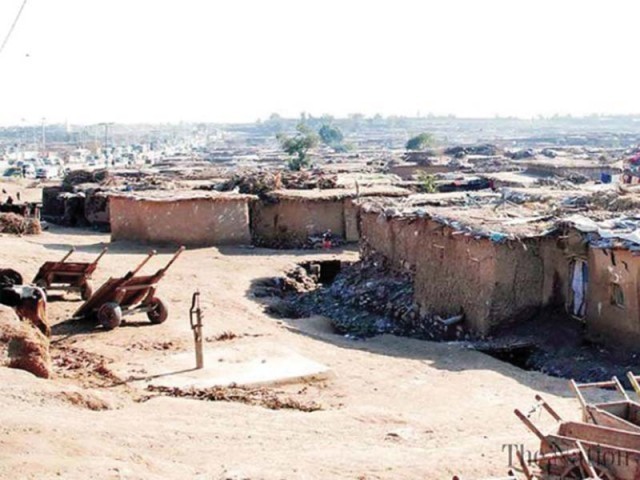 Pervez Khan is 35. He was born in a slum in Sector I-11. Khan still lives there. He earns a living by the sweat of his brow, moving fruits and vegetables in the nearby Sabzi Mandi market.

Born and bred in the city, Khan is as much a citizen of Islamabad as one could be, but there is a caveat. His ancestry is from Peshawar, and that is enough for the local authorities to push for his eviction. They claim he is not a local.

“I was born here. I grew up here. I work here. They are kicking us out because they say we are not locals. How am I not of this town?” he asks, worrying that the police might pick him up for talking to the media.

Perched on the stoop of the shop he works at, Khan admits that criminal elements do reside in the area. “But they are one per cent of the population. Most of us are good hard working people. Our only sin is poverty.” He added that ‘the big [criminal] fish live in big houses, while small fry live in slums”.

On plot allotments, he said “Yes, the people who were allotted plots have a right to those plots, but we also have a right to a roof over our heads. We don’t want big plots or anything like that, just a place to live.”

When asked about the option of moving to a hypothetical low-income housing development, he opined that locals would happily agree to such a proposal as long as they could easily and affordably get to work from their hypothetical homes.

“We have a legal right to housing from the government,” he said, referring to Article 38-b of the Constitution, which is interpreted to mean that the state shall provide “reasonable” housing for every citizen, along with employment and leisure opportunities.

He added that the men held and arrested were almost all locals or at least Pakistani, and the only border that any of them had crossed was the one separating Punjab from Khyber-Pakhtunkhwa.

Where can they go?

Meanwhile, Awami Workers Party (AWP) Islamabad Information Secretary Ammar Rashid told The Express Tribune that the Sabzi Mandi Police detained around 100 residents of the slum in I-11 who were going to work early on Saturday morning.

The AWP leader said residents of the slum were continually being harassed by the local police and were being asked to sign eviction agreements.

He said that the high court decision did not absolve the government from its responsibility to provide shelter to citizens and to make resettlement arrangements prior to evictions.

He noted that there was a shortage of 10 million housing units in the country. “There is next to no public housing scheme in the country for low and middle-income groups.”

He said that around 25,000 people were currently living in the slum, 10-to-12 thousand of them being children. Rashid said that in the absence of alterate arrangements, they would all become homeless. He said three schools were being run in the slum by various non-governmental organizations, and eviction would also leave these children without access to education.

Rashid agreed that anyone involved in any criminal activity must be prosecuted according to the law, while noting that making people homeless would make people more susceptible to criminal elements.

Meanwhile, at the Sabzi Mandi Police Station, just across the road from the slum, SHO Maqbool Khan said with reluctance that arrests made by police on Saturday were part of “routine activity” against criminals and anti-social and were not linked to the court-ordered eviction drive. He said he could not share any information beyond the fact that they have been booked for loitering and suspicious behaviour.

But a lower-ranked official at the station told The Express Tribune on the condition of anonymity that 35 to 40 people were arrested, processed and shifted to Adiala Jail after orders from Assistant Commissioner Rabia Auranzeb.

While the cops say the arrests were unrelated, CDA Spokesman Rizwan Sajid said, “It was a joint operation against slum dwellers on courts order. He said a meeting was held among Islamabad Capital Territory (ICT) and CDA officials on Friday to discuss Saturday’s action.

Advocate Sardar Arshad Anwar explained the legalese, saying that under the clauses in the FIRs, the police may conduct snap checking of pedestrians, vehicles and motorbikes and access their personal records through unstructured supplementary services to address street crimes, but the police exploit this power by arresting law-abiding citizens, mostly slum residents and others from low-income groups.

Meanwhile, as light drizzle began and the area immediately began getting waterlogged, it became more and more difficult to call the squalor in which slum residents are forced to live, based on their limited means and with no assistance from the state, “reasonable”.

Primary education: 64 schools merged with other educational institutes in Pindi