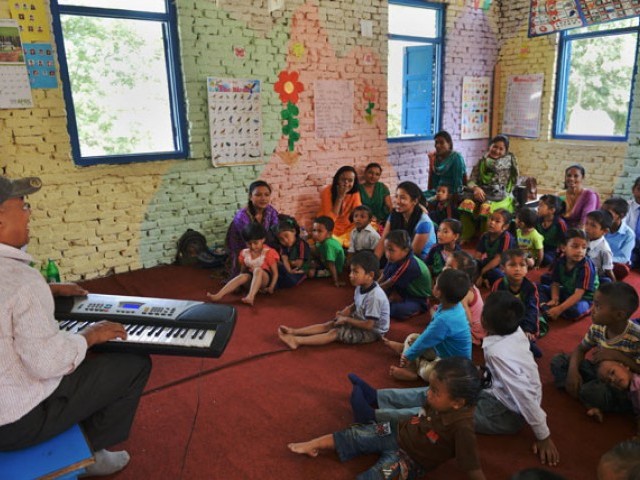 Nepalese students sing a song in the classroom of a school in Bhaktapur on the outskirts of Kathmandu on May 31, 2015. PHOTO: AFP

KATHMANDU: Many children attended lessons in temporary classrooms made of bamboo or in tents on playing fields after their schools were destroyed or badly damaged in the quake that struck on April 25. Nepalese schoolgirl Ankita Kapali (L), 11, prepares food before leaving for school in Bhaktapur in Bhaktapur on the outskirts of Kathmandu on May 31, 2015. PHOTO: AFP

Eight-year-old Sahaj Shrestha clung to his father as they walked together through the gates of state-run Madan Smarak School in the Kathmandu valley.

Sahaj’s mother Mina Shrestha said their son has been too terrified to leave their side, even to go to the toilet, since the quake destroyed their home and forced them to live in a tent.

“Aftershocks are still continuing. It is difficult not to be nervous about sending the children to school again,” Shrestha told AFP.

“But the teachers have assured us that it is safe here, and at least his mind will be fresh if he meets his friends and studies,” she said.

Classrooms made of bamboo have been built on the school’s football field, while some lessons were held in buildings marked “safe” since the quake by engineers.

Teachers sat with the younger children as they drew or played, some relieved to return to some semblance of normality. Nepalese schoolgirl Ankita Kapali, 11, cleans her shoes as she prepares to return to school in Bhaktapur in Bhaktapur on the outskirts of Kathmandu on May 31, 2015. PHOTO: AFP

“We’ve been staying home for so long, it is nice to play here and meet my friends again,” said nine-year-old Muskan Bajracharya.

In senior classes, students were encouraged to talk about the quake or share stories about what happened to their families. Nepalese parents walk with their children past damaged buildings to school in Bhaktapur on the outskirts of Kathmandu on May 31, 2015. PHOTO: AFP

“We are not holding any formal classes and have trained the teachers to help the children overcome the trauma of the quake and adjust to (being back at) school,” said  principal Govinda Poudel.

The 7.8-magnitude quake damaged nearly 8,000 schools, while some 90 per cent of them are estimated to be have been destroyed in the worst-hit rural districts of Gorkha, Sindhupalchowk and Nuwakot.

The quake struck on a Saturday afternoon when schools were closed. Many had been preparing to open the following week for the new semester.

“I don’t even want to imagine what would have happened if it was a school day,” said Sakuntala Bhlon, 37, whose two children study in classes five and eight. Nepalese schoolboy Jaswoba Chheakna, 4, looks out of the window of a schoolroom in Bhaktapur on the outskirts of Kathmandu on May 31, 2015. PHOTO: AFP

The reopening had been declared for May 17, but was delayed after a second major 7.4-magnitude quake rattled the country on May 12.

For some schools, however, reopening so soon after the quake has proved impossible, with temporary classrooms still being built, and continuing concerns about safety and space.

“It is impossible for me to reopen right now. The school ground is filled with debris and we don’t have an open space,” said Lila Nanda Upadhyay, principal of Rupak Memorial International School in the Kathmandu valley.

“We understand that not all schools have the resources to reopen,” he said.

“But education is an important part of the recovery and we need to begin the process.”