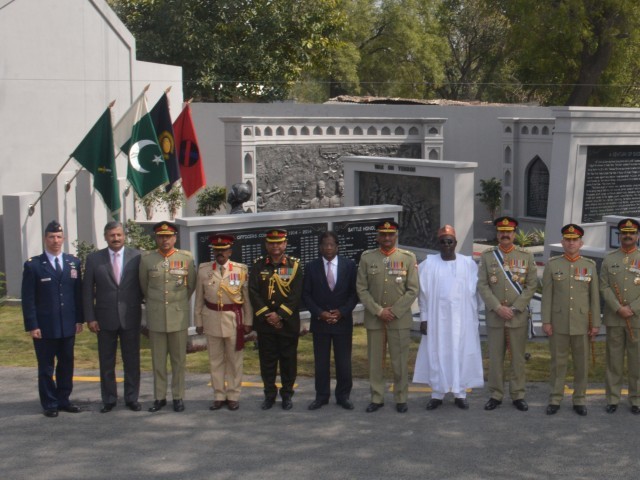 General Raheel Sharif in Lahore to commemorate 100 years of raising of the Infantry Division. PHOTO: ISPR

In remembrance of 100 years to World War I, Chief of Army Staff General Raheel Sharif highlighted on Monday the significance of deterrence, and need for operational preparedness to avoid war.

According to DG ISPR Major General Asim Bajwa, the army chief was speaking in Lahore to commemorate the Infantry Division of the army, which was raised 100 years ago during WWI.

He also paid a tribute to the tradition of soldiering.

#COAS at Lhr to commemorate infantry Div's raising 100 yrs ago duringWorldWar-1.Tribute to tradition of soldiering1/4 pic.twitter.com/rExHILMPTg

General Raheel underscored the need for robust conflict resolution mechanism, an absence of which led to the devastating war 100 years ago.

The army chief said WWI serves as a reminder that the international community needs to show urgency in resolving long standing, international disputes that await resolution.

#COAS speaks on 100 yrs of WW1;underscored need for robust conflict resolution mech,absence of which led to devastating war 100 yrs ago-2/4

#COAS:100 yrs of WW1;Highlights importance of deterrence &need for op preparedness,not to promote war but to preserve peace-3/4

Pakistan committed to strengthen economic ties with US: Nawaz