Since we don’t read, we become easy prey for the disinf­ormati­on that goes around on such critic­al issues.
By Shahzad Chaudhry
Published: August 11, 2013
Tweet Email 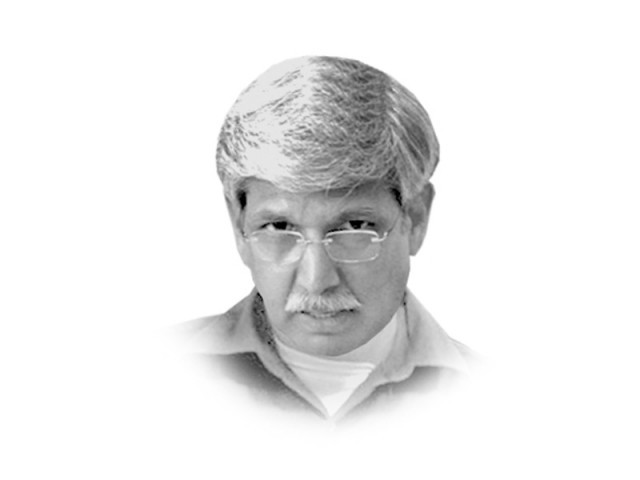 Ask anyone in Pakistan: what shall the two neighbours, India and Pakistan, fight their next war on, and you are likely to get a consensus on the answer: water. Not that it is necessarily true, but that is the current creed, built on a half-baked and semi-literate discourse pedalled on a daily basis in the mainstream media.

Why is this done? And, why is such a narrative successfully entrenching itself? The answer to both dilemmas lies in the domain of partial inquiry that beguiles this developing thought. Those who pass as experts are only half that. None is taught the field of hydrology or even has basic education in water. In such a barren landscape, shorn of water wit, if the dominating belief is that India is selling Pakistan’s electricity extracted from stolen Pakistani waters, or even more insidiously, is sending our way water minus its electricity, show me the way to Mars.

This Martian existence has other dimensions, too. The present adviser on water and power to the government is a pharmacist by training. The PPP government had a medical doctor as the minister in charge for petroleum and natural resources for most of its five years, who reportedly had something to do with inducting the pharmacist. Not exactly a reassuring lineage. But listen to the current adviser on water talk of the power travails and his prescription for alleviating the curse of persistent power cuts, and you are likely to come out singing his praises. Whether he has ever been close to a real grid station though, is another issue altogether.

With premier slots in the government open to glib fly-by-night experts, competition is bound to rise. That, in essence, is the underlying causality for the current band of water warriors spewing venom at one another and on anything that emerges from the inner sanctums of government as the way forward out of the power morass.

The basic construct of the Indus Basin Water Treaty, which governs water relations between India and Pakistan, was luckily constituted in English — translations, too, are available — and anyone with a basic sense of science and geography should be able to understand the essence of what this excellent piece of agreement contains as the guiding principles to keep waters flowing. The treaty has stood the test of three-and-a-half wars, and many near ones since, when all else failed between the two states.

The problem is, not many have opened up the treaty and its various annexes to correctly define and identify the rules for run-of-the river projects and permitted levels for domestic, consumptive, non-consumptive and agricultural use. Similarly, what is India permitted as ‘pondage’, as against ‘storage’ that she is frequently indicted for in the Pakistani narrative? Cumulative storage in ‘pondage’ is not to exceed 3.6 million acre-feet (MAF). Do we know how much India is actually storing? A recent figure suggested over 200 MAF in popular discourse in Pakistan. Pakistan’s total share of the three western rivers averages 117 MAF. From where is India managing to store more than 200 MAF from the same rivers? And these are Pakistan’s rivers. Since we don’t read, we become easy prey for the disinformation that goes around on such critical issues.

India and Pakistan each store roughly the same amount of water (16 MAF) from their allotted rivers in the Indus Water Treaty; yet, India produces 12,700MW of power from their three rivers, compared with Pakistan’s 6,717MW only from the three western rivers. From Chenab alone, India recovers 8,700MW, while Pakistan extracts only 14MW. It is a dynamic of finances — of which India has plenty more — and of topography that India exploits better. Our woes are many; in water, too, but we must begin by husbanding our resources better.

A recent television discussion on water wars counted a civil engineer, a fighter-pilot, a man who runs a private security company and two journalists as experts. Pity the listening audience. The landscape is droughty and barren and the impostors have an easy ride. Ferret out the water-literate and put them to work.

Selection blunders by the PCB