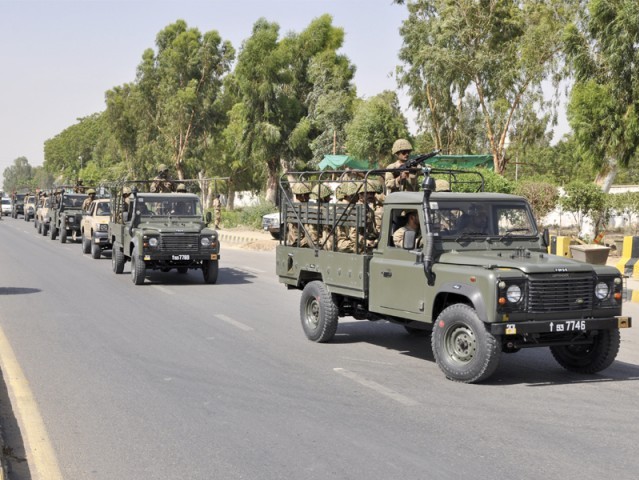 The army has deployed close to 70,000 troops for the elections. PHOTO COURTESY ISPR

The army on Wednesday finalised security plans for the Punjab‚ Khyber-Pakhtunkhwa and the tribal areas for the upcoming elections, Radio Pakistan reported.

Army Chief General Ashfaq Pervez Kayani said the army will play its due role for ensuring peaceful‚ free‚ fair and transparent elections. Presiding over high-level security meetings in Lahore and Peshawar on Wednesday, he said the army will provide all possible assistance to the civil administration for maintaining peace around polling stations on election day.

According to the Inter-services Public Relations (ISPR)‚ the Army Chief was briefed about the security plan and deployment of troops in both the provinces and tribal area to assist civilian security forces for ensuring peace on the polling day.

Director General ISPR‚ Major General Asim Bajwa told the media after the meeting that the high command of the army had expressed satisfaction over the election arrangements and also took some decisions to further improve the situation. He added that a quick response force of the army will remain standby to tackle any law and order situation.

Bajwa said that Gen Kayani had directed to effectively impose the security plan.

The military’s chief spokesperson said that ballot papers have been supplied to all concerned returning officers in all parts of the country under strict security measures.