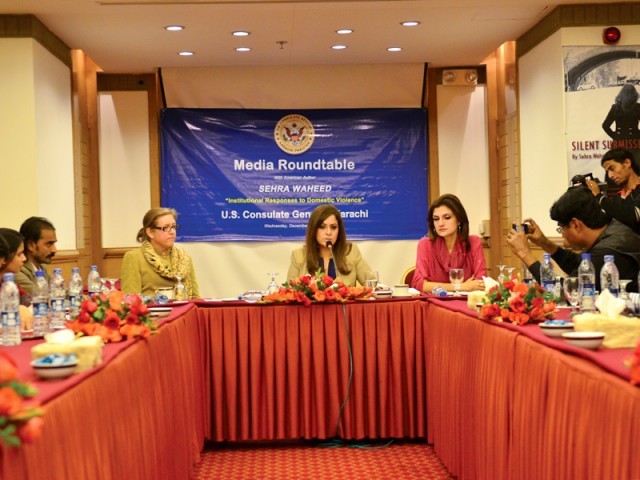 Pakistani-American author Sehra Waheed has transcribed her pain at the hands of her abusive ex-husband on the pages of her first book, Silent Submission. PHOTO: EXPRESS

While many survivors of domestic violence find it difficult to speak about their traumatic experiences, Pakistani-American author Sehra Waheed has transcribed her pain at the hands of her abusive ex-husband on the pages of her first book, Silent Submission.

A woman who is beaten up by her husband every day and desperately wants to end the vicious cycle seems to have little or no social, legal and familial support in Pakistan, Waheed says.

Speaking at a media roundtable organised by the US Consulate on ‘Institutional Response to Domestic Violence’, Waheed highlighted the issues survivors of domestic abuse face in Pakistan.

“If a woman in Pakistan goes to file a complaint against her husband or in-laws she is harassed and told to resolve the matter within the four walls of her house,” she said. “Men need to fear the law and know there are repercussions for their savage behaviour.”

Waheed was born in Karachi but moved to the United States at an early age. She met her husband in 1997 as a teenager. “Six years later we got married, after which he not only inflicted me to emotional, physical and financial abuse but also [marital] rape.”

“In our society we have the concept that once a girl is married that is the end of it,” said Zara Sethi, who also survived an abusive marital relationship. “Then if she is being abused she must not say a word nor does her family support her in any way.”

Sethi tried to hold back tears as she explained what, exactly, an abusive relationship is.  “When we talk about getting beaten up, we are not just talking about a slap or a shove. We are referring to a half-hour long beating in which belts, hangers and chairs have been broken after being ruthlessly inflicted on us. We are talking about merciless beatings where the domestic help begs the man of the house to stop so we don’t end up dying as a result. We are talking about times when children run to form a protective shield around their mother who is being beaten up before their eyes as a daily routine.”

Sethi had no saviour, not even her family. She decided that she could not live that way and left her house – but at the cost of leaving her children behind. “My only consolation is that my ex-husband is a good father and looks after my sons so I left them to live with him.”  She refused to name her ex-husband, a high ranking official, as she says she fears for her life if she does.

Waheed and her husband divorced four years ago, but she says it took her a long time to move on from the traumatic experience.” Women need to put their foot down and decide ‘Enough is enough, I won’t subject myself to this anymore’,” she said. “Some women think well he is bigger and stronger how will I fight back. Maybe you can’t hit back but you can walk away and end what he is putting you through.”

She also stressed the need for stronger legal protection for survivors of abuse. Quoting Aurat Foundation, Waheed said 136 cases of domestic violence were reported in Sindh in 2010. Many other cases go unreported.

Waheed and Sethi urged women to come forward. “It is only when we unite and not only pass bills but also implement them that we can truly protect ourselves and other women suffering the same fate.”