“You are free to go to your mosques…”

“You are free to go to your mosques…” 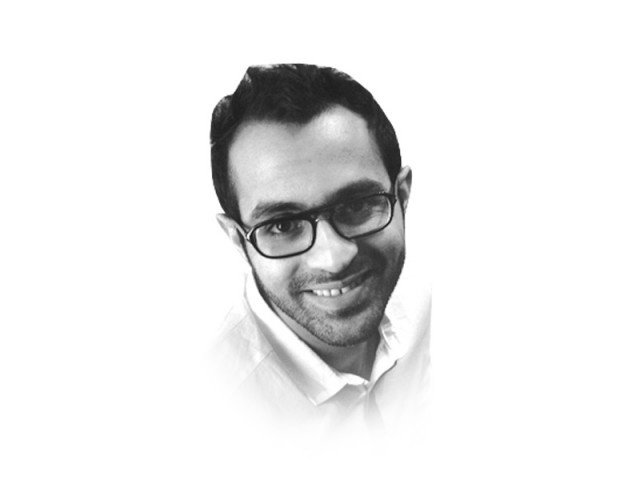 Coffee-drinking liberals in the increasingly Islam(ist) republic often quote the oft-quoted. And I dare not preclude myself despite the fact that I prefer tea to coffee — only black though. Some like me find refuge in nice-smelling cafes where, while reeling from the ongoing metropolitan battles, i.e. of designer lawns, we pepper our conversations with all that has gone wrong in Jinnah’s Pakistan. Others, the more savvy ones I mean, have turned a new leaf, to put it literally; they are to be found rallying on pages of the world wide web. Nice-smelling cafes provide us with proof of a ‘progressive’ Pakistan, one that we have managed to neatly secure in our airtight islands. Social media pages are also useful as they too come with walls (and privacy controls). And I am, of course, not one of those who think that people like us live in our own bubbles. I have two good reasons to believe otherwise. One, the bubble, if there was any, has long burst. Two, living on an increasingly marshy terrain like a ‘progressive’ Pakistan requires that we incessantly swim from island to island. And it is in commuting back and forth across what lies between such islands that we experience a Pakistan that, perhaps, Jinnah failed to foresee. Governor Salmaan Taseer was not assassinated in the comforts of his home, neither in the secure environs of a café where he presumably took his last meal, but out in the marshes where he couldn’t stand his ground amidst souls he could not discern. Shahbaz Bhatti, too, amongst other martyrs, fell between homes on unfamiliar territory. If Jinnah envisioned a nation where religion would not be a matter of the state, as many would argue, he clearly failed to spot the crevices in his own argument.

But Jinnah, despite the portraits where his suits are painted over as sherwanis, is an image, we, the liberals of this country, can relate to with much ease, so much so we now have some signs of ‘wear a Jinnah cap day’. Distance to ritualised religion; foreignness to tradition, including his propensity to the new, perhaps makes an ideal template for the liberal Pakistani. But, more importantly, the image provides a suitable background against which our persistent colonial hangover continues to make some sense.

In a rather revisionist spirit, Ayesha Jalal has attempted to resurrect a Jinnah few in the Republic would endorse. Amidst a well-put-together audience of liberals at the Mohatta Palace last year, Jalal offered a fascinating thesis. Jinnah, in her opinion, did not originally envision Pakistan as a separate country, instead he imagined national sovereignty and self-governance for the Muslims of the subcontinent under the all-embracing Indian umbrella. Correct or otherwise, Jinnah, if given another chance, would perhaps willingly have aligned himself with the sophisticated position of Jalal. I am not concerned here with the particular form his vision took, neither do I stand to pass a judgment on history, though his own humanist position was hardly shared, let alone understood by the masses he commanded. My discontent then is not with Jinnah or with Pakistan, as it may seem. In fact it stems from the intellectual poverty of its liberals, who seek to resurrect inconsistent parts of an ideology that has long sunk into the Bay of Bengal. In response to the growing intolerance in our society, we often quote Jinnah from his admirable address of August 11, 1947: “you are free to go to your temples, you are free to go to your mosques or to any other place of worship in this State of Pakistan. You may belong to any religion or caste or creed, that has nothing to do with the business of the State.” What is worth questioning, however, is how to wish away religious difference in a territory that is founded on the very discourse of cultural and religious difference, the Two-Nation Theory to be precise.

Wary of what seemed to unfold in August 1947, in a poem titled Subohe Azadi (The Dawn of Freedom), Faiz famously wrote “yeh woh sahar toe nahi” (lit: this is not that dawn). Quratulain Hyder, on the other hand, weaves a millennia of a narrative to question the cultural uprooting of Indian Muslims in her epic Aag ka Darya (The River of Fire). First published from Lahore in 1959, the novel challenged the exclusionary stance furthered by the All India Muslim League. Yet, in the new country, there was a desire to make something anew. But little space was left when it turned to those who sought to further purify this land of the pure.

In our impoverished attempts to reclaim this space, we continue to unearth the remains of a twentieth century ideology; we are eager to present history as a meaning-making whole, in narratives that espouse the grand and the romantic at the expense of the fragmentary and the marginal. Inheriting distaste for diversity and difference, and in our fear of local and ethnic grammars, we have enforced vocabularies of assimilation. If at all, we have inherited a notion of identity which is constructed on the very premise of its distinction in its opposition to an imagined Other. The Other-ing as we are witnessing has since not ceased.

To persist on the discourse that Pakistan was meant to be a secular state is to feign a belief that we have some recourse to an original moment whereby the dream can be salvaged. This is but a false pretence for hollow ideologues. More so, it is an ahistorical reading and a glossing over of various ideological forces that since its inception have fought for recognition in the State of Pakistan.

To hold on is to linger; to persist is to resist change. If there is a befitting answer to the ideology of those we fear losing our freedoms to, it is in the intellectual pursuit of an emancipatory vision, shared by all and owned by us, which is no longer tethered to the original bias of our foundation. For in Jinnah’s Pakistan, some are not even allowed to call their mosques, mosques and some not even free to go to their mosques, let alone their temples.

Nawaz Sharif gets it right on India