Confus­ion prevai­ls about when and where they will receiv­e the food pledge­d by the govern­ment
By Hafeez Tunio
Published: March 31, 2020
Tweet Email 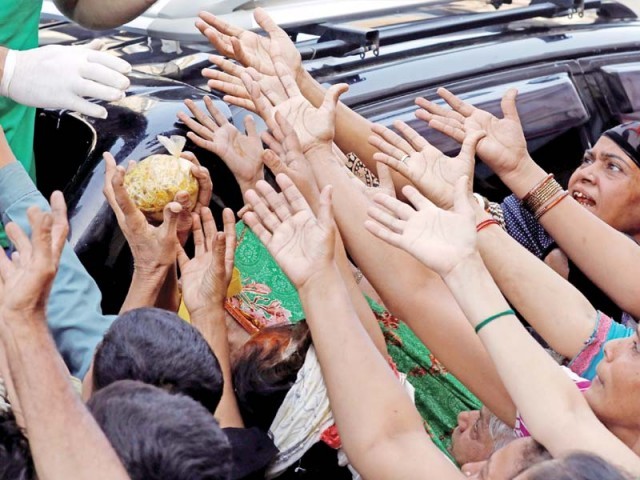 People reach out to get a packet of ‘biryani’ from a charity worker in Karachi. The ongoing lockdown has left many unable to afford meals for themselves and their families. PHOTO: REUTERS

KARACHI: As confusion prevails over the distribution of rations to the needy over a week after the Sindh government imposed a lockdown on the province, many daily-wage workers are losing hope of ever receiving the promised food.

Following the outbreak of coronavirus in the province, Sindh Chief Minister Syed Murad Ali Shah on March 23 had announced a Sindh-wide lockdown, pledging to provide 2 million bags of rations to the doorsteps of those who needed them.

A committee comprising representatives of welfare organisations, social activists and government officials was to expedite the process to provide relief to the poor who were confined to their homes and could not afford meals without the wages they earned on a daily basis.

Nine days later, the people who needed this aid from the government are still wondering when and where it will be provided to them.

“I run a pushcart. For the last nine days, I have been sitting idle at home. When I go to the union council (UC) office to ask about rations, they tell me to go to Larkana because of the permanent address on my ID card,” narrated Irshad Ali, who lives at Lyari’s Niazi Chowk.

Though the officials tell him to go back to Larkana, there is no train or bus service to take him to his native village. “I live here with five kids. Who will answer when my family sleeps on empty stomachs?” he asked.

Ali is not alone in this dilemma – even those with permanent residence in the metropolis face the same situation.

Azhar Baloch, from Lyari UC, was initially told to approach the UC nazim for registration, but the officials kept telling him to be patient and wait for the proper time. “I don’t know when the proper time will arrive. Will they provide rations to the needy when the lockdown is over?”

According to government data, there are around 10 million people – or 1.4 million families – of daily-wage workers in the province. Of this, 25 percent are associated with the construction industry and 35 percent with the textile and ancillary industry. These are covered under the Employees’ Old-Age Benefits Institution (EOBI).

The remaining 40 percent of workers, though, work in small and medium enterprises, cottage industries, roadside shops and the transport industry. They are not registered with any organisations like EOBI or the Sindh Employees Social Security Institution.

Earlier, the Sindh government released Rs20 million to each deputy commissioner in Sindh, telling them to work with UC nazims and other local elected representatives to list down the needy people in their areas and provide them with rations.

However, this process was suddenly halted on Sunday. The DCs in 29 districts of Sindh were asked to temporarily suspend this exercise. Instead, they were told, the government was going to launch a mobile application to register needy people, while funds would be distributed through local NGOs.

“Sindh has now established a Sindh Relief Initiative Application with a URL address. Under this, social welfare organisations interested in working with the government will have to get themselves registered to distribute rations to daily-wage workers at their doorsteps,” the CM’s spokesperson said in a statement on Sunday.

According to the latest decision, the daily-wage workers, too, will have to get themselves registered through a mobile application before they can get the rations. Government officials claimed that the app would ensure uniformity in disbursement by registering CNICs, so that no duplication could occur.

“The government has principally decided to register people online and give them funds through Jazz Cash Transfer,” said Sindh Energy Minister Imtiaz Ahmed Shaikh, adding that this decision had been made to discourage people from crowding in one place to obtain funds or food. He said that one person from each family would be entitled to receive the government’s help.

In a letter to the federal Interior Ministry and the Finance Division, the Sindh Home Department had also explained this scheme, adding that the provincial government planned to use the assistance of the National Database and Registration Authority, Federal Board of Revenue, Federal Investigation Agency and State Bank of Pakistan to help disburse cash to those who truly needed it.

Opposition parties, though, called the government’s initiative a joke with the people.

“The government should know how many of the poor own mobile phones or know how to register themselves online,” pointed out Pakistan Tehreek-e-Insaf’s Haleem Adil Shaikh, addressing a press conference.

He added that 10 days of the lockdown had passed already. “When will the government finish its process? This is nothing but a drama to play with the lives of poor people,” he insisted.