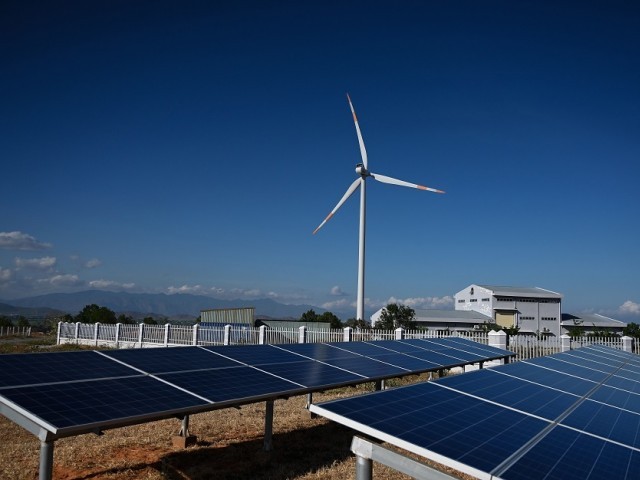 LAHORE: As Punjab suffers both a power crunch and high levels of air pollution, the provincial government is looking into cleaner alternatives for meet its residents energy needs. However, before it can embark on a slew of renewable energy projects, it needs the centre to remove one hurdle.

Speaking to The Express Tribune, senior Punjab officials said the provincial government has asked the federal government to remove a ban on renewable energy initiatives imposed by the previous regime. According to them, the matter will be taken up in the next meeting of the Council of Common Interests (CCI).

The previous Pakistan Muslim League-Nawaz government placed the ban on the directives of then premier Shahid Khaqan Abbasi. Although the exact reasons were unclear, some suspected the ban was imposed to pave the way for RNLG initiatives the PML-N wanted to introduce.

The request to overturn the ban was sent on the advice of Punjab Energy Minister Dr Akhtar Malik. “We are looking into introducing various renewable energy initiatives in the province. There is immense potential for solar power in the country but previous governments were uninterested,” he said. “The initiatives we are planning can save billions of rupees. We also want to encourage domestic consumers to go solar and are preparing a technical assistance initiative in this regard.”

According to Punjab officials, the province’s energy department is in the midst of preparing feasibility reports for a plethora of solar energy initiatives. One of them envisions converting a large number of the province’s tube-wells to solar power.

They said Energy Minister Malik has already held meeting with the housing minister and secretary in this regard. The energy department has also asked the Water and Sanitation Agency (Wasa) to conduct a survey of tube wells so find out which ones are optimally suited to being converted to solar power.

Speaking to The Express Tribune, Punjab Energy Department Managing Director Adnan Mudasir said they were working on the feasibility for transferring the lowest capacity tube-wells to solar power. Punjab Housing Secretary Naseem Sadiq said surveys are being conducted in Mianwali, Dera Ghazi Khan and Khushab at the moment.

“In our meetings with the energy department, we determined that Wasa tube-wells would have to switch back and forth from solar power to the national grid in order to function at night.

So the energy department is devising a system based around time relays that will switch the wells from solar to grid automatically,” Sadiq added.

Mudasir, meanwhile, said they were also looking into the financial aspect of the proposed initiative. “We want to figure out how much money we can save and how much subsidy we would need to offer to farmers.”

Punjab Agriculture Secretary Wasif Khursheed voiced skepticism, however. “Our department has some reservations as we believe the proposed solar system could lead to an unusual reduction in ground water,” he said.

$9.25b summary sent for expansion, reconstruction of tracks