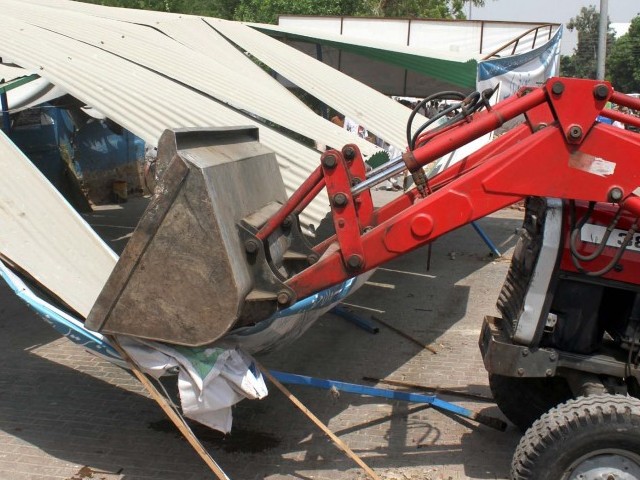 The court ordered the committee to determine whether the building was safe or not. It also suggested giving the building under the commissioner's control until the report was submitted. PHOTO: FILE

KARACHI: The Supreme Court ordered on Friday the National Accountability Bureau to submit a fresh report regarding the construction of a building on an amenity plot, located near Aladdin Amusement Park, in two weeks.

A three-member bench, headed by Justice Gulzar Ahmed and comprising Justice Faisal Arab and Justice Sajjad Ali Shah, was hearing the case at the SC’s Karachi registry. National Accountability Bureau (NAB) Investigation Officer Ramesh Kumar submitted the report. The court expressed annoyance with the NAB officials, with Justice Ahmed observing that the NAB was now siding with the accused. NAB is also presenting a fake report on illegal allotments, the court remarked. The allotment of this building was against our orders. That means NAB is also on their side.

Justice Sajjad Ali Shah questioned how a Qatari national was given the land of the Evacuee Department. Justice Ahmed questioned how many more Qataris will be born to run the country? Land was allotted to how many Qataris? What services has this Qatari offered to Pakistan for which land was allotted to him? “Don’t do this. Look what has become of our country. Don’t submit such a fake report to us,” remarked Justice Ahmed. He questioned what the NAB chairman was up to and whether the accountability watchdog had teamed up with the accused too. A brief report has been submitted instead of examining the records, the court observed.

The court rejected the NAB’s report and ordered it to submit a fresh one in two weeks.

The SC summoned the Attorney General, federal finance secretary and planning secretary and ordered them to present video recordings of the Karachi Circular Railway’s route, its land and the anti-encroachment drive.

Justice Gulzar Ahmed headed a meeting in the Supreme Court’s Karachi registry, where the Sindh chief minister presented a detailed report regarding the KCR and other upcoming mega projects in Karachi.

According to the report, the Sindh government has opposed the restoration of the KCR. It states that is impossible to restore the old circular railway. There were 24 stations of the circular railway and almost all have been encroached upon.

The city would be torn if the KCR was restored, the report reasons, adding that bridges and the Green Line project has been built on the land of KCR. Other big projects are being started instead of restoring the KCR, which would have the capacity to accommodate 600,000 commuters daily. The Sindh government, therefore, requested the court to review its orders regarding the tram and circular railway.

In a separate case, the SC formed a committee, comprising experts of the National Engineering Services Pakistan (NESPAK), Pakistan Engineering Council and Sindh Building Control Authority (SBCA) to examine the building of Sea Breeze Plaza and submit a report in two months.

The same bench was hearing the case regarding the declaration of Sea Breeze Plaza unsafe. SBCA and Karachi Cantonment Board (KCB) officials submitted a report which states that the judicial orders have been complied with. The SBCA has formed a panel and its own engineers will examine the building.

Justice Ahmed remarked that the NESPAK should determine if the building is safe or not. “What is NESPAK’s procedure to examine a building? What assistance can Pakistan Engineering Council provide?” questioned Justice Ahmed, adding that a panel should be formed to examine the structure.

The court expressed annoyance with the KCB for submitting an unsatisfactory report. The court inquired who had given the permission to construct the building and where were the details. The court also questioned why the KCB didn’t have a system to examine its own building.

The court ordered the committee to determine whether the building was safe or not. It also suggested giving the building under the commissioner’s control until the report was submitted.

The SC directed on Friday the K-Electric and Karachi Metropolitan Corporation (KMC) to settle the issue regarding payment of bills in two weeks.

A two-member bench, comprising Justice Mushir Alam and Justice Munib Akhtar, was hearing the case at the Supreme Court’s Karachi registry. The court remarked that it would be better for the Sindh government and other parties to decide the issue themselves, otherwise the court would look into the matter and make a decision itself.

The court questioned if it was their job to settle such issues. Justice Alam remarked that if the Sindh government couldn’t run the province’s affairs, it should just leave.