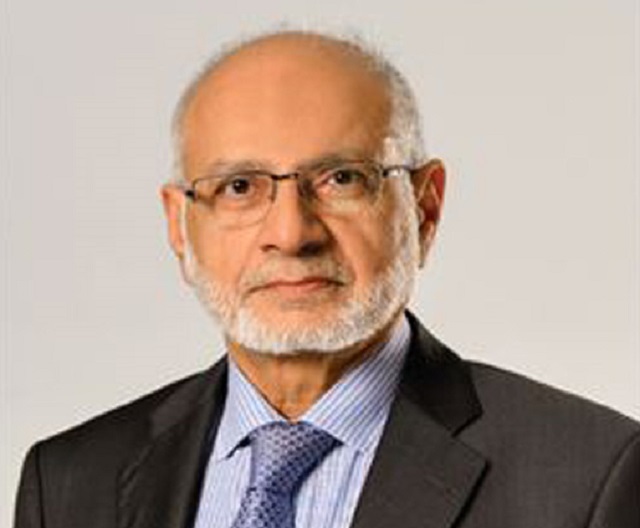 Chairman of the PSX boards, Hussaain Lawai is facing charges of laundering over Rs25b through 29 fake accounts. PHOTO: FILE

Hussain Lawai, a prominent banker who is also chairperson of the Pakistan Stock Exchange and has served as head of the Summit Bank, was taken into custody by the Federal Investigation Agency (FIA) in connection with alleged illegal bank transactions worth billions of rupees.

Earlier on Tuesday, Lawai was barred from travelling to Dubai and was directed to approach the FIA, Karachi office for recording his statement in an inquiry. Lawai was taken into custody when he reached the FIA’s zonal office for the purpose on Friday.

According to Express News, FIA, Sindh Director Munir Sheikh while talking to the media said, “Lawai is facing charges of laundering money through 29 fake accounts. The employees of the Omni Group of Industries operated the said accounts.”

The FIA said another senior banker, Raza Hussain, was also taken into custody in connection with the case. They said the FIA had initiated an inquiry into this scam in 2015 and issued notices to responsible persons, including Lawai.

“Twenty nine (29) accounts belonging to at least seven people were used to launder around Rs25 billion in Sindh and these accounts were opened in three banks, including Sindh Bank and Summit Bank, and were being operated by the employees of Lawai and Omni Group,” claimed an FIA source.

He said the FIA had investigated and found at least four ‘benami’ companies about three to four years ago through which Rs20 billion transactions were made; however, the FIA investigators found the addresses of the three companies fake while the fourth one was owned by a Tariq Sultan, who is an employee of a sugar mill tycoon Anwar Majeed.

The official said the ‘benami’ accounts at the Summit Bank were allegedly opened in 2013, 2014 and 2015 and transactions worth billions of rupees occurred through these accounts.

“Such transactions were made for corruption purposes. The accounts were made in the Summit Bank and the Sindh Bank which were being used by the operatives of Anwar Majeed and Lawai’s employees,” he added.

The source said so far they had found at least 29 accounts of the Summit Bank and Sindh Bank and the accounts were reportedly used by a close confident of ‘the head of a political party’ and employees of the Omni Group.

When contacted, the local PPP leadership was unaware about the developments while senior PPP leaders Sherry Rehman and Farooq H Naik could not be reached as they did not answer their cell phones.

In December 2016, a section of the media had reported that the Pakistan Rangers conducted raids at the Karachi office of the Omni Group of Companies and the residence Anwar Majeed, a close aid of Zardari. The Omni Group had later issued a statement denying the reports.

Last month, the Rangers had arrested former special assistant to Sindh government, Ismail Dahiri, in a raid on his residence and fuel station in Benazirabad district. Dahiri is also considered a close aide of Zardari and an office bearer of PPP Nawabshah chapter.