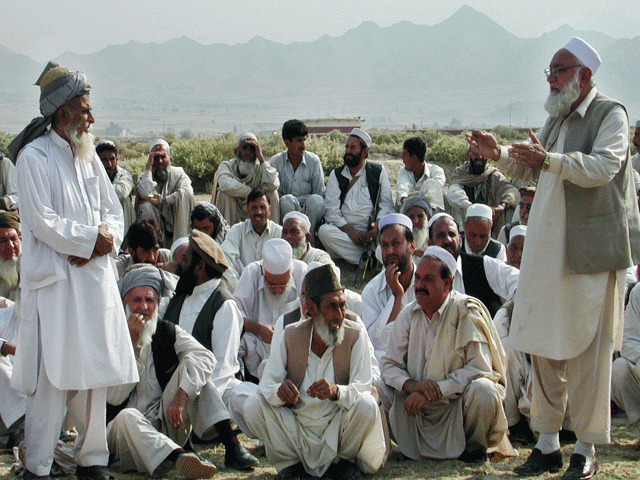 PESHAWAR: To improve public-government contact and boost the latter’s confidence in the state machinery, the Khyber-Pakhtunkhwa government has decided to set up a new means of reaching out.

Open forums or the ‘Intra-District Khuli Kutchehris’ (town halls) will be held to allow the public to raise their concerns over issues. On the other hand, the concerned government departments authorities have been directed to listen to the issues of the public carefully and ensure that they are solved immediately on the ground level.

On October 27, the provincial government had notified a standard operating procedure (SOPs) for organising the Kutchehris to create a sense of ownership amongst the public.

An official notification, a copy of which is available with The Express Tribune, directs all provincial administrative secretaries, all divisional commissioners and all deputy commissioners in the province to thoroughly study the SOPs and to make sure they participate in these forums at least twice a month.

The SOPs state that the Kutchehris would demonstrate how services are provided at the doorstep of the public. It also mentioned that apart from listening to and resolving public complaints it also the duty of concerned officials to convey government views points on any particular issue.

Moreover, the SOPs stated that the deputy commissioner of the area would be responsible for making arrangements for hosting the forum and enable the concerned officials to participate in it.

If the officials are unable to participate in the Kutchehris physically, they can join the proceedings either by phone or Skype.

Apart from directions on attending the Kutchehris, all the relevant officers have been asked to focus on key issues such as the shortage of or unavailability of health and education facilities at hospitals and schools respectively.

It would tackle problems such as staff shortage, non-availability of teachers, books, missing basic facilities, absenteeism, and corporal punishment in the education sector, Moreover, it would address complaints of not lodging FIRs, ill-treatment and misuse of power.

Moreover, two types of Kutchehris would be held, a regular one where the deputy commissioner along with the heads of all the concerned departments would participate in person to face members of the public at tehsil buildings, council halls, government schools or in public parks.

In their private capacity, officials can also utilise hujras, mosques, madrassas, Eid-gahs and even police stations.

The other is an e-Kutchehri where the deputy commissioner would go on-air, either through an online portal, the local cable channel or a local FM radio channel at the prime time where the people can phone in with their queries and get answers live.

These will be held twice a month on a rotation basis.

Further, officials will have to submit progress reports of each Kutchehri to the concerned divisional commissioner as well as to the Performance Management and Reforms Unit (PMRU).

Locals have appreciated the initiative and have asked that the government properly implement it with a focus on resolving public issues on the spot. “I appreciate the K-P government for this initiative which would provide an opportunity to the commoners to interact with officials face-to-face and resolve their issues,” said Sardar Ali, a resident of Mardan.

He asked the government to direct the concerned officials to take the open forum seriously and ensure that the officials attend it on time so that locals can have the maximum time to voice their complaints.

Talking to The Express Tribune, PMRU Coordinator Adil Safi shared that over the past six weeks, around 70 Kutchehris have been held across the province.

Asked about the difference between Kutchehris in the past and those initiated by the incumbent government, he explained that this was the first time that attendance of officials had been made mandatory while the deputy commissioner was bound to hold at least two such Kutchehris every month.

The coordinator further said that the top complaints received at the Kutchehris are about municipal services, followed by health and education and then load shedding.