The army is the only altern­ative when civili­an govts stop functi­oning, say judges­
By Naeem Sahoutara
Published: December 1, 2017
Tweet Email 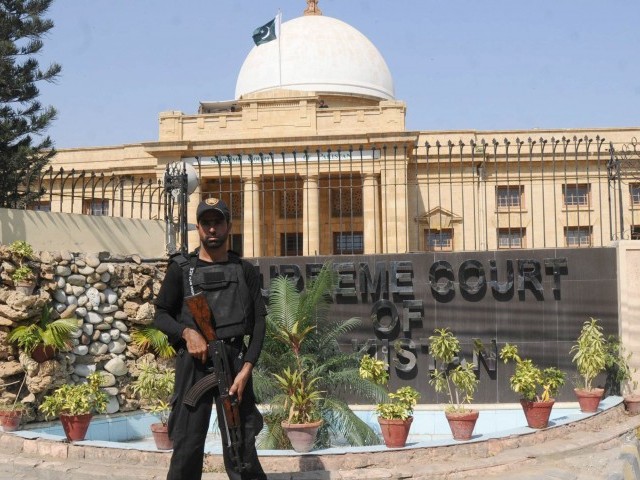 Eight policemen with patchy records were terminated while 84 others were forcibly retired, the court was told. PHOTO: EXPRESS

KARACHI: The Supreme Court (SC) observed on Thursday that the army remains the only alternative when the civilian departments stop performing their functions.

The apex court’s two-member bench further observed that the army will be everywhere if the civilian departments will not work.

These strong observations were made by a bench comprising justices Gulzar Ahmed and Sajjad Ali Shah during hearing of a petition seeking the court’s order for the Evacuee Trust Properties Board and the Sindh Building Control Authority (SBCA) authorities to get illegal constructions demolished and occupants of a plot evicted.

The top court had passed directives and orders time and again to demolish illegal constructions and get the Evacuee Trust’s properties retrieved from illegal occupants since last year, but the officials concerned failed to implement the same.

At the outset of Thursday’s proceedings, the judges observed that no solution to the problem had been found by the SBCA and the Evacuee Trust Properties Board. They looked into the concise report filed by the board.

The bench inquired from the lawyers representing the provincial government, the board and SBCA whether the illegal constructions had been demolished and the premises been retrieved, as previously ordered.

The bench members expressed their extreme displeasure over the poor performance of the federal, provincial and local governments.

Justice Ahmed remarked that the whole city had been defaced due to the SBCA’s poor performance.

Taking exception to the attitude of the officials of shifting their responsibilities on each other, he noted that the SBCA officials seek help from the police, while the police seek assistance from the Rangers.

The top court’s judge noted with concern that the whole state machinery has been destroyed.

A police official presented a report, showing that the Hindu claimant of the subject property, Shankar Lal, had a criminal record.

The additional advocate-general, Muhammad Sarwar Khan, conceded that the SBCA and board were not performing their duties. He pointed out that the police had recorded the statements of the occupants of the building, which they had alleged that they had purchased from the petitioner, Abdul Karim, and had paid a substantial amount to him.

The law officer argued, however, that under Article 187 of the Constitution, the court may exercise its authority to get its orders implemented.

The law officer’s reply visibly irked the bench members, who noted that the officers of the Sindh government had turned so apathetic that they were not even performing their duties honestly. It further observed that the government officers were not willing to work.

The judges ordered: “In the circumstances, where statements of occupants of the building are available with the police authorities, the in our view the police should take immediate action against the petitioner, Abdul Karim, and to ensure that whatever illegal money he has obtained from the occupants, same be deposited by him in the government treasury and thereafter disbursed the same to the allottees against vacation of respective premises by them.”

They also ordered the police to take the petitioner, who was present in court, to the police station where necessary compliance will be made in accordance with the law.