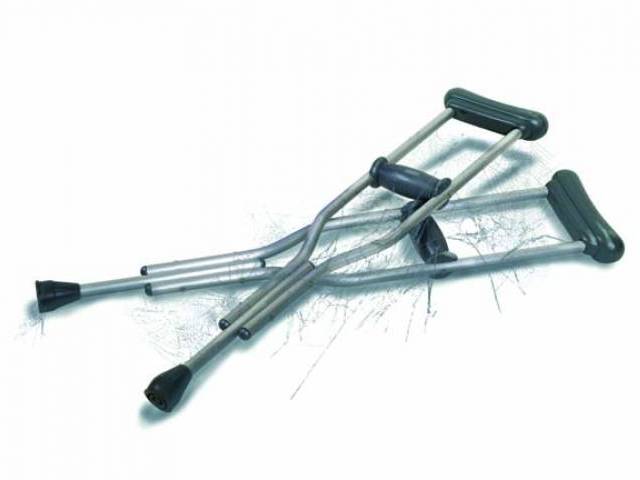 ISLAMABAD: Due to poor implementation of road safety laws, reckless driving as well as crumbling infrastructure, accidents have become common in Pakistan.

Driving a vehicle is seen as a routine task for commuters, yet it is one of the most dangerous things one can do. As road accidents cause myriad of fatalities, not to mention the number who are left disabled from their injuries.

Living a life dependant on others is just as painful if not more than knowing that your aspirations will never become a reality after a life-altering event.

“I never thought that my life would take such a turn of unfortunate events, which would shatter all my dreams,” said Komal Nisa, 21.

Her leg was recently amputated after sustaining a grievous injury in a road accident.

Nisa was waiting at Margalla Chowk for her university bus last May, when a reckless car driver hit her, leaving her with severe injuries and multiple fractures.

She was hospitalised at Shifa International, where she underwent surgeries but despite the doctors’ best efforts her leg was amputated as an infection was spreading.

Though, people at the scene of the incident captured the reckless driver, Muhammad Azad, and handed him over to Golra police, he was released on bail the very next day as the suspected man had links with an influential person.

The case was registered with the police but no development has taken place in the case till the time the report was filed.

Nisa said that “Loss in terms of money can be recovered but a human body can never be repaired.”

She added that “I wish our people would drive safely and more carefully”.

Nisa quite poignantly added that “I had heard that people pray more in hospitals than at the mosques, and now I realise that this saying is true.”

Nisa’s brother told The Express Tribune that she was in a state of shock since her amputation and had now begun recovering.

She was enrolled as a student of doctor of physical therapy (DPT) at the University of Lahore, Islamabad campus.

Nisa was always a brilliant student throughout her academic career and aspired to become a doctor one day.

In her first semester in DPT, she secured the top position with a 4.0 GPA.

Nisa’s father is a retired airman of the Pakistan Air Force and the family is finding it difficult to manage her costly treatment.

“So far we have spent around rupees three million on her treatment,” said Babar Hussain, the victim’s brother.

Babar said that initially they had asked for compensation but the accused party refused to pay all the expenses and promised to pay rupees one million, adding that so far they had received only Rs0.5 million.

Quaid-i- Azam University Sociology Department Head Muhammad Zaman says “If Pakistan will not control road accidents it will be its own worst enemy.”

He said that in the country over Rs100 billion were spent annually in repairing damaged vehicles and in the medical treatment of accident victims.

The average number of deaths due to road accidents is an astounding four per day in Pakistan.