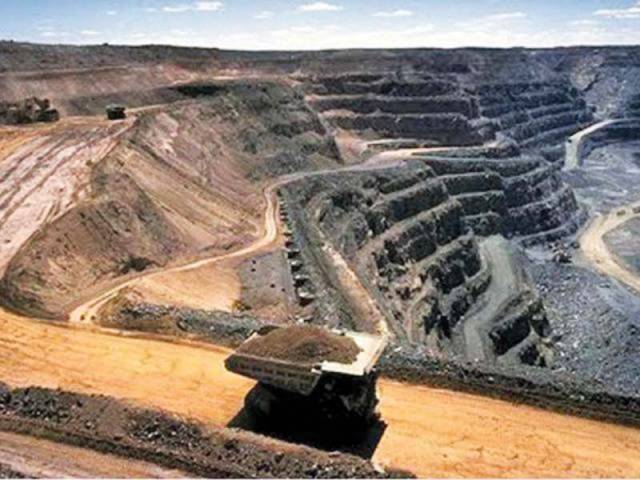 The minister said that the Thar coal mining projects would be operational by 2018. PHOTO: FILE

ISLAMABAD: Projects worth $30 billion out of a total portfolio of $46 billion have been initiated in the last one year, said Minister for Planning, Development and Reform Ahsan Iqbal, adding that there was no bureaucratic hurdle in the implementation of China-Pakistan Economic Corridor (CPEC) schemes.

The financing arrangements for $30 billion CPEC projects are either finalised or are at various stages of approval, said Iqbal while addressing a press conference a day after the National Economic Council (NEC) meeting.

The minister said that most of the $30 billion active portfolio is in the private sector while financing agreements of road infrastructure projects of the public sector have also been signed.

Iqbal said that making $30 billion CPEC portfolio active in a limited period of one year was a big success for the country and it shows that there were no bureaucratic hurdles in the way of swift implementation.

Govt accused of not sharing details of CPEC projects

Iqbal’s comments came amid pressure to set up a CPEC authority for swift implementation of the projects that started under Chinese president’s strategic initiative, One-Belt One-Road.

The purpose of the proposed CPEC authority is said to fast-track approvals and monitoring of these schemes. However, the federal government has already turned down the request on the ground that it would add another bureaucratic layer.

Iqbal said that Gwadar port projects including New Gwadar International Airport and Eastbay Expressway have been forwarded to the Chinese side for financial approval. He hoped that this process would be completed in the next three months and work would begin soon.

According to Iqbal, the government has allocated Rs125 billion ($1.2 billion) for carrying out work on CPEC schemes during the new fiscal year 2016-17. “However, the allocations remain far less than the actual requirements.

“An amount of Rs60 billion has also been allocated for two LNG-fired power plants being set up in Punjab,” Iqbal added, hoping that these two projects would be completed by May next year.

He said in the last three years, 610 projects costing Rs747 billion have been completed.  The minister said that the 1,320MW Port Qasim power project would be completed by September next year while the Thar Coal mining projects would be operational by 2018.

To a question whether Chahbahar Port of Iran was a threat to Gwadar port, the Minister said that Pakistan does not feel threatened by any project.

For the outgoing fiscal year, the federal government had allocated Rs700 billion for PSDP spending while the four provinces allocated Rs814 billion, bringing the total outlay to Rs1.514 trillion. However, the Planning Commission on Monday informed the NEC that the spending would remain close to Rs1.401 trillion.

Iqbal insisted that the Rs114 billion lesser spending than approved budget was not actually a cut but a result of administrative weaknesses, legal issues and capacity constraints. Contrary to this claim, the International Monetary Fund had reported about a year ago that the federal PSDP spending would remain lower than the Rs700 billion allocation.

The minister said that due to less spending the ministries actually surrendered the surplus funds allocated for the outgoing fiscal year.

This nullifies the case of seeking a trillion-rupee federal PSDP after the ministries and corporations were unable to spend half a trillion rupee fund. As against Rs253 billion allocations in the outgoing fiscal year, the federal government has earmarked Rs282 billion for federal ministries and divisions in the new budget.

For social sector, Rs90 billion have been earmarked, which is only Rs9 billion higher than outgoing fiscal year’s allocation. An amount of Rs29 billion is set aside for the education sector and another Rs30 billion for health and population projects.