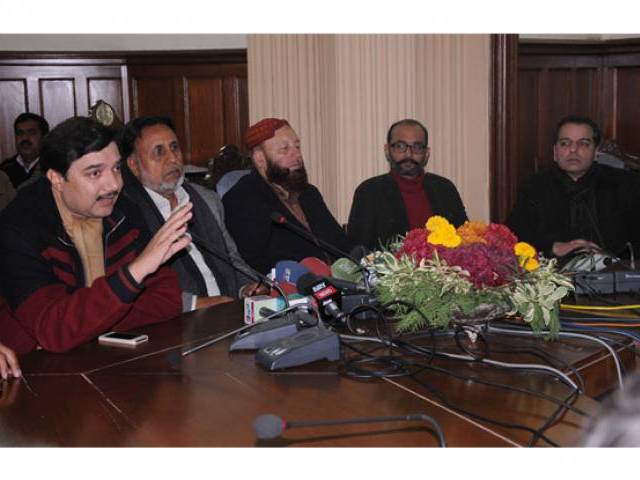 The declaration called upon the government to address objections raised over the Orange Line Metro Train project. PHOTO: EXPRESS

Four major opposition parties in the Punjab Assembly on Monday formed an alliance against what they said was undemocratic attitude of the provincial government.

The alliance warned that a protest campaign would be launched if the government did not respect the PA’s mandate and set its priorities right.

The announcement was made following a meeting among the Pakistan Peoples Party, the Jamaat-i-Islami, the Pakistan Muslim League-Quaid and the Pakistan Tehrik-i-Insaf leaders.

Talks among Leader of the Opposition in the PA Mahmoodur Rasheed and leaders of other opposition parties on a joint opposition front in the assembly were underway since December last year.

A declaration issued by the alliance condemned the government for ignoring southern districts of the province in allocation of development funds.

It expressed serious reservations over promulgation of ordinances by the government without debates on the matters concerned in the House. It said that such measures violated the House’s mandate.

It demanded that regular sessions of the assembly be held in accordance with the annual calendar.

The declaration called upon the government to address objections raised over the Orange Line Metro Train project. It demanded that the House be satisfied that funds were not diverted from health, education and sanitation sector projects to the Orange Line project. It also sought disclosure of information about the conditions under which the Chinese government had extended the loan for the project.

The declaration sought elimination of taxes on various agricultural machinery to extend short-term relief to farmers.

Addressing the press after the meeting, Rasheed said that according to his information Rs25 billion had been diverted from other projects to the Orange Line project. He said the provincial government had not spent the funds in accordance with the priorities laid out in the budget and demanded a mid-term audit of the budget by the next PA session.

Rasheed condemned the government for what he called its failure to announce support prices for several agricultural commodies.

He said law and order situation in the province had deteriorated despite a 25 per cent raise in the police budget.

Rasheed ruled out the possibility of political differences among the concerned parties affecting the alliance. “We will work together against the government’s failed policies, regardless of our differences,” he said. JI’s Dr Waseem Akhtar said the parties were also working out an understanding on cooperation beyond the provincial level. “The government is denying the people of south Punjab their basic rights by focusing its energies on Lahore only. How is this fair?” he said.

PPP’s Jahangir Watttoo said all decisions regarding the alliance were being made in consultation with central leaders of the parties.

PML-Q’s Vickas Hassan Mokal said the opposition had no problems with the Orange Line project. However, he said, it wanted the government to first provide basic needs of the people and to protect their rights.

The speakers demanded that the House be consulted over all ongoing development projects. They asked the government to ensure that PA sessions were held on schedule.